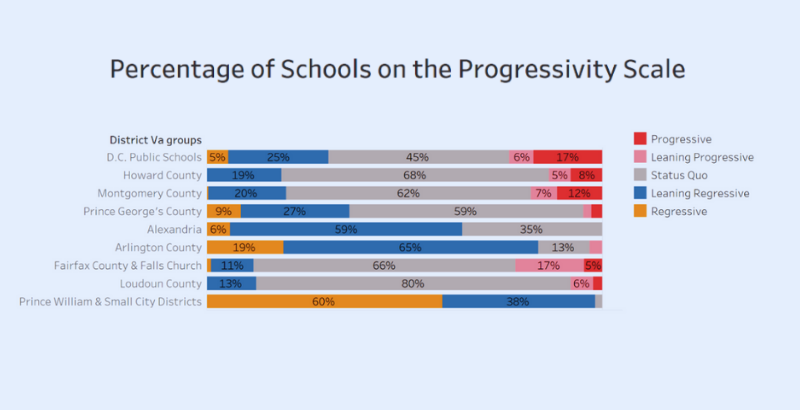 Today, the biggest question in school finance is: Do America’s schools meet the oft-stated goal of infusing additional dollars to support students in low-income areas? In other words, are schools funded progressively, to give a leg up to disadvantaged students, or regressively, to spend money in schools where the children have the advantages of wealth?

Researchers have found that at the national, state and district levels, school funding has fallen short of the progressive funding that is the goal of the federal government and many states.

Using a new, more precise dataset, I analyzed the Washington, D.C., metropolitan area (known locally as the DMV) and found that the region’s K-12 funding is regressive — but individual districts provide progressively more per pupil as the income range decreases. This is known as a Simpson’s Paradox, a statistical phenomenon in which combined numbers do not reflect the patterns of smaller groups.

The dataset was made possible by the Every Student Succeeds Act, which requires states to report actual per-pupil funding in every public school in America. Previously, officials had reported individual school budgets based on average teacher salaries for the whole district, not actual teacher salaries in those schools.

This almost always underestimates spending for high-income neighborhoods in a district, where teachers tend to be experienced and earn more on the standardized pay scale. And the converse is true for schools in low-income areas that employ young, lower-paid teachers.

The new data, reported for the 2018-19 school year for the first time, accurately measures a school’s per-pupil allotment from both federal and state/local sources. This enables comparisons across state lines.

In my analysis, I combined the funding figures with Census data on the per-capita income for almost 1,000 schools in D.C., Maryland and Virginia based on their zip codes and classified those zip codes as ultrarich, wealthy, average and low income.

When school spending is totaled by income group, the picture looks regressive. Wealthy and average-income areas receive more than the low-income and ultrarich. Low-income schools receive about 6 percent less than affluent schools. While the difference is not significant, it is far from the progressive ideal in which low-income schools would get extra money for their students.

When broken down by jurisdiction, however, the picture looks different. D.C. Public Schools spends 22 percent more in low-income areas than the ultrarich ones, a classic progressive model.

Maryland is somewhat progressive. It allocates less to ultrarich and wealthy areas than average or low-income areas. But low-income schools get $270 less than those with average income, based on the Maryland zip codes in the sample.

In Virginia, spending is regressive. Wealthy and ultrarich schools are funded with an additional $2,400 per pupil compared with those in low-income areas — a 17 percent difference. The average low-income school in Virginia receives less money per pupil than schools do in the wealthiest zip codes in Maryland and D.C.

But that is not the end of the story. Looking at Virginia districts, all appear progressive. In other words, the lowest-income category in each section spends more than the groups above it.

So how is it that total Virginia spending is so regressive when all its districts in the sample look progressive?

These charts show the paradox. In total, funding looks regressive. For the states and D.C., it is a mixed bag. But even in the most regressive state, individual school districts look progressive.

Two factors combine to create the region’s regressive funding, and both are tied to the distribution of wealth within each jurisdiction.

The charts below show that large countywide districts with wealthy areas have the resources to distribute funding in progressive ways. In general, the greater the percentage of schools in high-income zip codes, the higher the rate of schools with progressive financing.

In short, districts have to have wealth to share the wealth.

That is why 89 of Prince William County’s 91 schools in the sample were regressive or leaning that way. Without any wealthy schools to generate revenue, the district did not have enough money to invest in its low-income areas or even provide its average-income schools with average funding levels for northern Virginia.

By comparison, the wealthier districts generated enough revenue to spend progressively in some schools and ensure most of their average-income areas got within the average amount of spending.

The uneven distribution of wealth is not the only contributing factor to the degree of progressivity in districts. State funding formulas may play an even more significant role.

Virginia “places a relatively high burden out of all states on localities to pay for a majority of K-12 costs,” according to The Commonwealth Institute for Fiscal Analysis. As in most other states, local property tax revenue provides most school funding. The formula aims for overall K-12 spending to be 45 percent from local sources and 55 percent from the state. Federal funding for Title I, special education and other grant programs is allocated based on their formulas.

Although Virginia creates an index to determine each school district’s “ability to pay,” it does not correct the imbalances in property tax revenue between the wealthy areas in the inner-ring suburbs (Arlington, Alexandria and Fairfax ) and the relatively lower-income zip codes in Prince William County.

Without local funds to invest, Prince William County will not be able to raise spending in its low-income areas to create a progressive picture for northern Virginia.

By contrast, Maryland sets a minimum amount of per-pupil funding for each district, distributing a larger share of state resources to lower-income communities. In addition, there are programs for addressing the needs of children who are at risk, have limited English proficiency or have disabilities. As with the foundational grant, the low-wealth districts get a larger per-pupil share of that funding.

In 2021, the Maryland legislature passed a new school funding approach improving the one in place in the 2018-19 school year. The changes could tip the state toward a progressive distribution of school money.

Finally, Washington, D.C.’s school finance approach sets a per-pupil amount that provides the foundation for each school and then adds money for each at-risk student, English learner and child in several special education categories. Schools receive an additional 22 percent per pupil at risk and up to three times per pupil for students with the most severe disabilities.

The result is the most progressive school funding in the region.

When measuring school funding, there is more than meets the eye. Digging deeper into the data helps understand the nuanced story and the detailed policies that result in progressively or regressively funded schools.

The situation is better in some places than others, but this much is clear: In the DMV, the states and districts can do better and should be striving to do so.

David J. Hoff is a writer and data analyst based in Arlington, Virginia.

David J. Hoff is a writer and data analyst based in Arlington, Virginia.