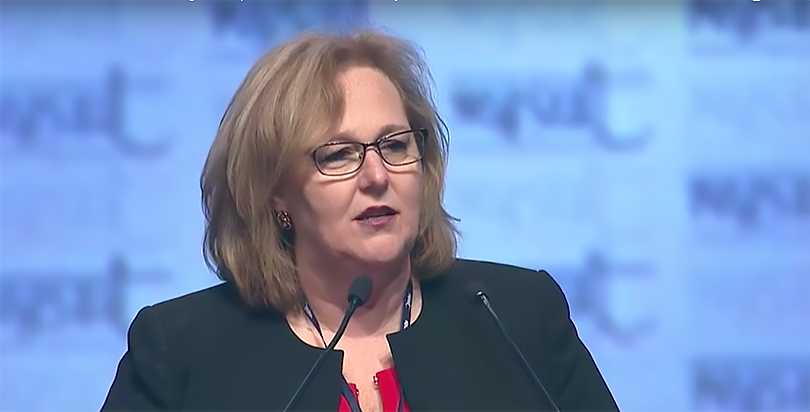 Mike Antonucci’s Union Report appears Wednesdays; see the full archive
New York State United Teachers will hold its annual representative assembly in New York City on April 7–8. The main order of business will be the election of new officers. For the first time, it’s possible that that election will hinge on the union’s apparently precarious finances.
Though union officials won’t say so publicly, it is getting increasingly difficult to deny that NYSUT is afloat on a sea of red ink with an iceberg ahead.
Its primary worry concerns liabilities for pensions and retiree health care for its employees (not for teachers, whose benefits are covered by the state). NYSUT needs a half-billion dollars to cover those costs and is currently short by more than $400 million.
(The 74: New York’s Teachers Unions Are Millions in The Red)
The union has not commented recently on its debt, but in the past its spokesman brushed off the net assets calculation as the “most speculative, least instructive number” in its financial reporting — because of variations in interest rates and employee retirement patterns, among other factors that influence it.
Better investment returns and higher interest rates would boost NYSUT’s numbers, but another economic downturn and/or future inflation would presumably have the opposite effect. Downplaying net assets of negative $413 million may be necessary to keep up public confidence, but it is instructive to compare NYSUT’s characterization of its negative net assets with the way a union with favorable net assets characterizes them.
We need look no further than one of NYSUT’s parent unions. Last year, the National Education Association’s net assets were nearly $300 million. “One important indicator of an organization’s financial strength is its net assets,” NEA’s secretary-treasurer reported. “Net assets should be a positive balance, sufficient to support future growth and stabilize an organization in troubled times.”
NYSUT fails on all three counts.
Its long-term debt might be manageable if it were handling current assets responsibly, but the union has been running deficits annually for nearly a decade, resulting in an accumulated debt of $144 million.
To be clear, that’s not a projection — it’s what spending more than you bring since 2007–2008 looks like.
Privately at least, NYSUT officers recognize the danger. Last year, Rick Karlin of the Albany Times Union reported on an internal NYSUT memo that warned the union’s pension reserves could be depleted in five years.
With elections approaching, activists are taking notice. NYSUT’s officers dismiss critics outside the union, but it’s difficult to marginalize Harris Lirtzman, whose credentials both as a labor advocate and in the financial world are unique and seemingly impeccable.
Lirtzman became a New York City teacher late in life, after a long career at Merrill Lynch and the New York City Comptroller’s Office, rising to the position of deputy comptroller for administration. As a teacher, Lirtzman was profiled in The New York Times for blowing the whistle on violations of the state’s special education regulations, charges for which he was ultimately vindicated.
Lirtzman has taken a special interest in NYSUT’s finances. In a letter to New York City education blogger Norm Scott, he described its situation bluntly, charging that it used member dues to pay overdue debts.
“NYSUT is a Ponzi scheme,” he said. “So long as the cash keeps moving from dues-paying members to NYSUT to the AFT to the UFT and back around it can keep its doors open.”
But he suggested that if the flow of dues slows for any reason, the structure collapses. “No one ever suspected that the cash could stop,” he said. “But it will stop and soon.”
Lirtzman explained in layman’s terms the two ways to fund a retirement system. “You can either make arrangements to pay for those commitments by funding them over time and investing those funds to earn more money,” he wrote. “Or you can take cash that comes in today from member dues and use it to pay the benefits you owe your current and retired employees. The first way is prudent but can be expensive. The second way can work but only if everything plays out the way you hope.”
In this scenario, a Friedrichs-type court action that results in an end to agency fees (paid by non-member teachers who benefit from collective bargaining) or an economic downturn that forces downsizing of school staffs could create a crisis.
Lirtzman thinks drastic action is necessary. “We can keep the worst of this from happening if we take the time, now, to understand how badly NYSUT is managed, how terribly our money is being misused and how much we will lose if we don’t act,” he wrote. “I hope that the political strategy [voting out incumbent NYSUT leaders] works in the long run. I’m afraid that we don’t have the long run to find out.”
As The New York Times suggested in that profile, “Perhaps it pays to heed Harris Lirtzman.”
Email tips to mike@the74million.org
Submit a Letter to the Editor
March 22, 2017