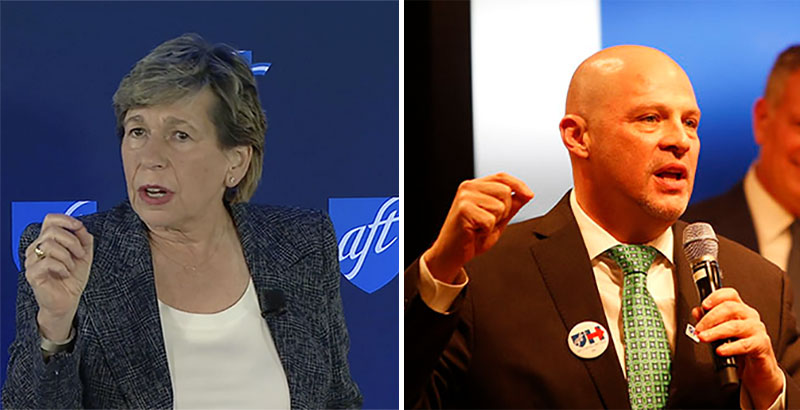 Give American Federation of Teachers President Randi Weingarten a platform and she will deliver this often repeated claim about shuttered school campuses and the pandemic:

One part of those statements is accurate. The AFT did put out a plan in April 2020. The rest, however, is easily refuted by looking at what AFT and its affiliates actually did during almost a year-and-a-half of widespread school closures due to COVID-19.

The report examines two questions: whether the teacher unions in the seven school systems actually supported and worked to reopen schools since the initial closures in March 2020; and whether their recommendations concerning reopening policies were vital necessities for the health and well-being of both students and employees or simply a wish list of desirable policy and funding outcomes unrelated to the virus.

The initial AFT reopening plan from April 2020 was accompanied the same month by a letter to the U.S. House of Representatives signed by Weingarten and the presidents of the other three major public employee unions: the National Education Association, Service Employees International Union and American Federation of State, County and Municipal Employees. Together they noted that “COVID-19 has exacerbated the deep inequalities in our society and underscored the need for additional public investments to combat this inequity.” The unions had a long list of requirements that went well beyond personal protective equipment and hand sanitizer:

“It is not the time to be concerned about deficits,” AFT stated. “And the federal government should be prepared to raise taxes.”

At the state level, the California Teachers Association issued a bargaining advisory to its locals only a few weeks after schools were shut down. “Now is the time to secure [contract] language improvements that we have wanted for some time,” it suggested.

CTA also lobbied the state legislature and the governor for multiple protections in the 2020 state budget. The union was successful in winning a ban on teacher layoffs, a substantial reduction in required instructional minutes, and the elimination of public accountability data collections for 2020, including those for academics, absenteeism, graduation and suspension rates, and college readiness.

In the largest school districts, resistance to reopening varied in intensity, but in no case was the union “trying to reopen schools.”

The United Federation of Teachers in New York City threatened to strike over the mayor’s reopening plan.

United Teachers Los Angeles made headlines when it demanded Medicare for All, passage of the union-backed Schools and Local Communities Funding Act, a wealth tax, a millionaire tax, defunding the police and a charter school moratorium as part of its reopening agenda.

The Chicago Teachers Union was forced to delete a tweet that read, “The push to reopen schools is rooted in sexism, racism and misogyny.”

The United Teachers of Dade joined a lawsuit against the state of Florida to prevent what it called the “reckless and unsafe reopening of schools.” It dropped the lawsuit two months after schools reopened.

The independent Clark County Education Association opposed the district’s reopening plan in July 2020, stating it would “support every educator and parent who chooses not to participate in the reopening.”

The Houston Federation of Teachers and other unions issued their own reopening plan, which included funding schools on enrollment instead of average daily attendance, a “massive investment in public schools,” suspension of high-stakes testing and teacher evaluations, maximum class size of 15 students, and hazard pay for custodial staff.

The Fairfax Education Association posted a petition demanding that in-person school not resume until a vaccine was widely available and there were 14 days of zero community spread.

Weingarten is not alone in seemingly trying to rewrite the past. Last August, NEA President Becky Pringle said in an interview, “The schools that stayed open were school districts that worked directly with educators and with their unions to make decisions that were best in terms of keeping students and all of the people in that population healthy.”

But that is simply not the case.

Researchers from Boston College and the University of North Texas examined the effect of union power on school reopening decisions. They concluded that “larger school districts where unions are undoubtedly stronger on average are far more likely to heed the preferences of unions to keep in-person schooling closed and rely on fully remote (online) models of teaching and learning.”

This month’s election results suggest the unions miscalculated the reaction of many parents of schoolchildren, who came to see teacher unions as one of the obstacles in reopening their classrooms. Sensitive to their public image, the unions have continued responding with the message that they actually fought to reopen schools — and are the main reasons that schools reopened safely for the 2021-22 school year.

With the midterms on the horizon, will their argument hold water with the voting public?