Analysis: 1 in 5 High Schoolers Is Chronically Absent. Here’s What Data Shows About Those Kids

According to a recent report from the Department of Education, one out every eight students in America missed three weeks or more of school during the 2013–14 academic year. (The number among older students is even more dramatic, as 20 percent of all high school students missed three weeks or more.)
The results indicate that chronic absenteeism — which is defined as missing 10 percent of a school year for any reason — affects students across the entire country, among all races, and has an equal impact on boys and girls. 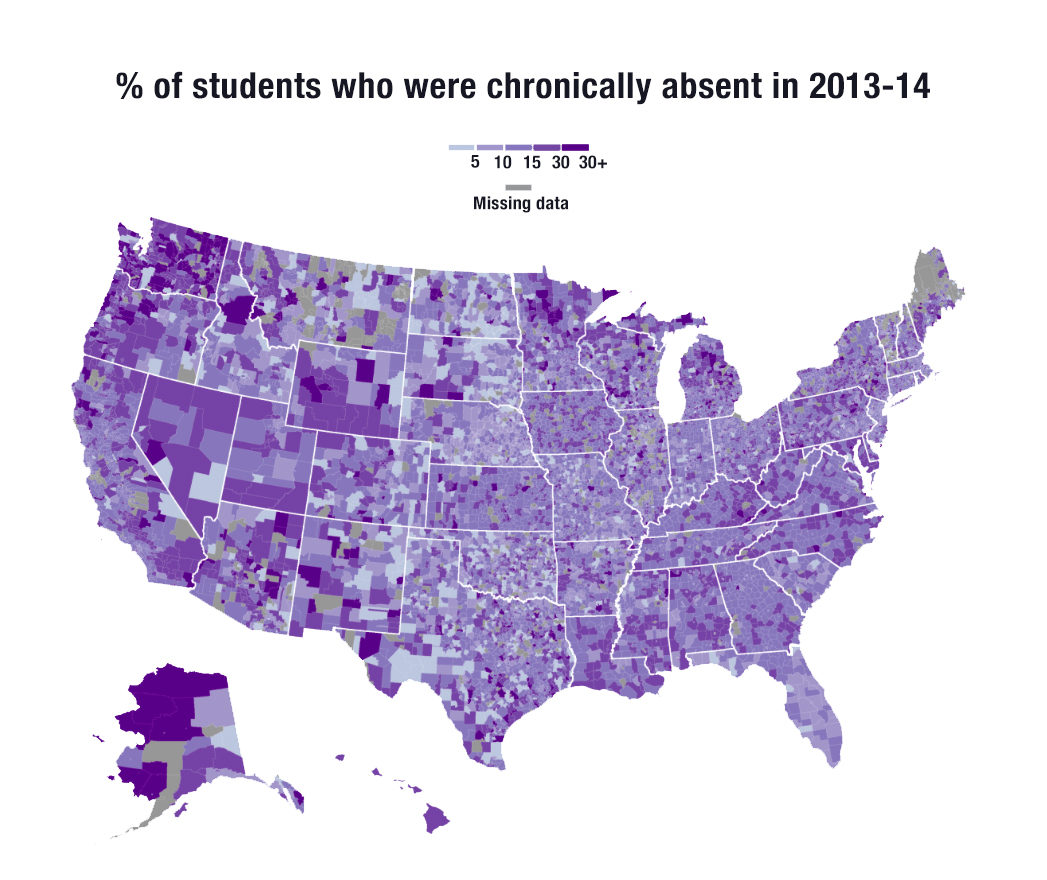 Photo: United States Department of Education "Civil Rights Data Collection (CRDC) for the 2013-14 School Year"
There are a number of major trends revealed in the analysis, including which students are affected most, where chronic absenteeism may not be fully captured in the data, whether geographical factors have an impact, and why habitual absence from school matters.
Access to objective data like this can help school counselors better understand when students are most at risk for chronic absenteeism so they can work with schools to identify these students early in the school year. This helps them target interventions and improve student outcomes.
So how can increased access to quantitative data surrounding chronic absenteeism help today’s school communities make informed and effective qualitative decisions about students at risk?
Absentee demographics
Although chronic absenteeism is common in all student groups, those of different races and ethnicities experience it at different rates. American Indian and Pacific Islander students are more than 50 percent more likely than their white peers to be absent from school three weeks or more, black students 30 percent more likely, and Hispanic students 9 percent more likely.
Dual-language learners are 22 percent more likely to be chronically absent, and those with disabilities are 34 percent more likely. Gender doesn’t appear to be a factor.
Data: United States Department of Education "Civil Rights Data Collection (CRDC) for the 2013-14 School Year"
In addition, although data in the 2013–14 Civil Rights Data Collection indicates that chronic absenteeism rates are highest in high school, findings in this year’s report suggest that students in early elementary grades may be experiencing it as well — but that data may be masked by being available only at the school level, instead of contributing to the analysis of broader trends.
However, the high school data is still significant — with almost 20 percent of students chronically absent, compared with nearly 12 percent in middle school and 10 percent in elementary.
This spike in high school is true for students of every race and ethnicity, but girls are slightly more likely to be chronically absent during these years than boys.
Data: United States Department of Education "Civil Rights Data Collection (CRDC) for the 2013-14 School Year"
At every grade level, students with disabilities are at increased risk for habitually missing school. Overall, the pattern for all students is nearly the same: As they progress into high school, the likelihood of chronic absenteeism increases.
Why counselors are essential
There are many reasons that students are chronically absent, and they’re typically linked to the challenges they and their families face — including poor health, limited transportation and unsafe environments. All of these factors can be extreme in poverty-stricken areas and disadvantaged communities. Students in these settings typically have higher rates of chronic absenteeism than those from affluent neighborhoods.
Joshua Aronson, an associate professor of applied psychology at NYU Steinhardt, which just launched Counseling@NYU, notes that while family stress and strife causes a great deal of absenteeism, it is also clear that some schools manage to have nearly perfect attendance. “When the school culture is one where kids are treated well and are happy, even kids from stressed-out families nonetheless come to school because they want to be there. There are schools the kids love so much that they are never absent, almost never sick. This tells me that chronic absenteeism is not simply rooted in dysfunctional families, but also in the school environment, which often compounds family stress with academic and social stress.”
Regardless of the cause, missing school on a regular basis can have an extremely negative impact that can last throughout a student’s life.
According to the Department of Education report, “Children who are chronically absent in preschool, kindergarten, and first grade are much less likely to read at grade level by the third grade. Students who cannot read at grade level by the end of third grade are four times more likely than proficient readers to drop out of high school.”
High school dropout rates have been reported to be as much as seven times higher among students who are chronically absent, and they have also been linked to negative outcomes down the road — including poverty, poor health and involvement in the criminal justice system.
As Linda Smith, deputy assistant secretary for early childhood development at the U.S. Department of Health and Human Services, noted in a press release, “If attendance issues are observed, high quality early childhood programs address these and reach out to families facing attendance challenges to find out why. As a result of offering support and solutions, children may then have better attendance habits in the early years that last throughout their school years.”
Specific strategies geared to help keep students in the classroom include those linked to the Obama Administration’s Every Student, Every Day: A National Initiative to Address and Eliminate Chronic Absenteeism. It’s the first-ever national, cross-sector initiative aimed at combating chronic absenteeism through urging states and local communities across the country to reduce absenteeism by at least 10 percent each year. There are a number of resources available through this initiative to help keep students in the classroom, including a toolkit that provides action steps and lists of existing tools and evidence-based resources to begin or enhance the work of addressing and eliminating chronic absenteeism.
In addition, as part of this effort, 30 communities across the country have joined the My Brother’s Keeper Success Mentor Initiative, an evidence-based effort that connects students who are or at risk of becoming chronically absent with trained school-linked caring adults — such as school counselors — and near-peers over the next three to five years.
Through all of these efforts we can help to lessen the rates of chronic absenteeism among students of all ages—providing them with more equitable opportunities for improved outcomes and a future of enduring achievement.
Michelle Manno works for 2U who partners with Counseling@NYU.

Michelle Manno is an education writer and researcher at 2U, an organization that partners with leading colleges and universities to deliver the world’s best online degree programs. She is a graduate of Hunter College with a master’s in Education Psychology: Assessment, Research and Evaluation.