An Oval Office Brawl Over Transgender Kids: 7 Things We Know About the DeVos-Sessions Showdown 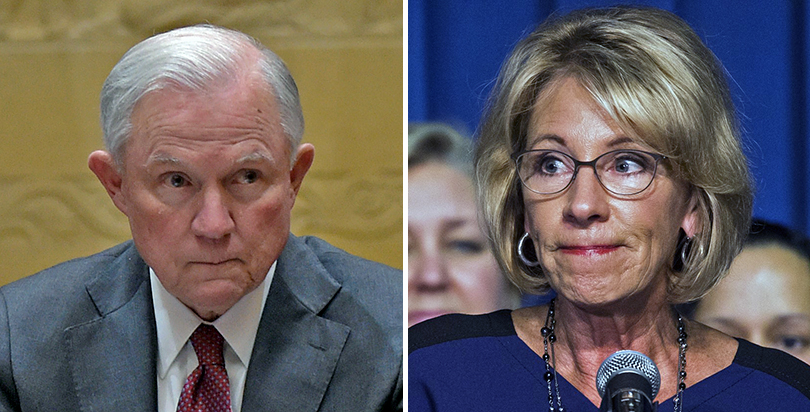 Late Wednesday, the Trump administration withdrew federal protections allowing transgender students to use bathrooms corresponding to their gender identity. As Carolyn Phenicie reports, the Education and Justice departments’ “Dear Colleague” letter said the Obama administration’s guidance didn’t have a sufficient explanation for how Title IX encompasses gender identity. The departments also said there should be “due regard for the primary role of the states and local school districts in establishing educational policy.”
Speculation is now swirling around what impact this move will have on the pending Supreme Court case involving Gavin Grimm, a transgender teenager who went to court against his Virginia school district.
While reactions of student-rights advocates have focused largely on student safety, political pundits are also taking note of what they see as the first heated showdown between President Trump’s cabinet appointees, pitting Attorney General Jeff Sessions against Education Secretary Betsy DeVos.
Courtesy of The New York Times, The Washington Post, and Politico, here are seven things we know about the first major Oval Office split over education:
The 74: Office for Civil Rights Sees Huge Surge in Complaints
Submit a Letter to the Editor
February 23, 2017