An Innovative Public-Private Partnership in California: Oracle Will Give Mentoring, a Tech Curriculum, and a New $43 Million Building to a Charter High School 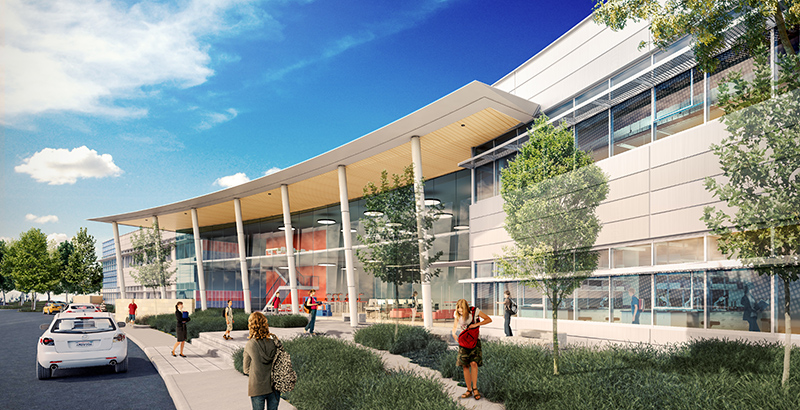 When Design Tech High School, known as d.tech, started in 2014 as a public charter school with 139 ninth-graders, its students took over a few unused classrooms in a traditional high school building in Millbrae, California. As that same group of students prepares to graduate from d.tech this spring, they will do so after moving into a brand-new, 64,000-square-foot, purpose-built high school on the campus of Oracle in nearby Redwood Shores. (Today was move-in day.)

The unusual public-private partnership between d.tech and Oracle, led by the Oracle Education Foundation, has the software giant paying for construction of the $43 million school building — but affords d.tech the independence to run the school autonomously, while giving the 550 students and 40 staff unlimited access to Oracle’s expertise as a fundamental component of the students’ education.

“We are looking forward to our students having an easier and ongoing relationship with folks at Oracle to get that mentorship and guidance,” says Nicole Cerra, d.tech director of learning. “There are a lot of great things about the location itself. The biggest advantage is getting to connect with [Oracle] volunteers.”

The LEED Gold structure offers a stark contrast to traditional school buildings. It is built on 2.5 acres of unused Oracle land, adjacent to a marsh, which has the school’s biology and environmental science teachers excited. The heart of the new building — in an almost literal sense — is its two-story Design Realization Garage, a giant maker space. From a woodshop on the bottom floor to a digital lab on the top, Cerra says, the space was intentionally placed in the center of school to send a message that Design Tech centers on creation — fitting for a school that focuses on extreme personalization in learning and the use of design to solve problems.

“Learning is not just about receiving information or regurgitating information,” Cerra says. “It is really about creation. When kids practice with active creation, it encourages them to be problem solvers in the future. That real-world experience empowers them to start making that difference we want them to make already when they are in high school.”

In fact, the first d.tech class of students was involved in every step of the design process, including helping to select DES Architects + Engineers and partnering with the firm as work progressed. “Even though they were just ninth-graders, they really participated confidently in design sessions, identifying needs, considering restraints,” Cerra says. “Their voices were big from the beginning, even if they didn’t get the zip line they wanted.”

The final building design is highly flexible, able to pivot as technology changes. From movable walls to modular furniture, everything about the construction was planned to support d.tech’s inevitable evolution, providing education both inside and outside the classroom. 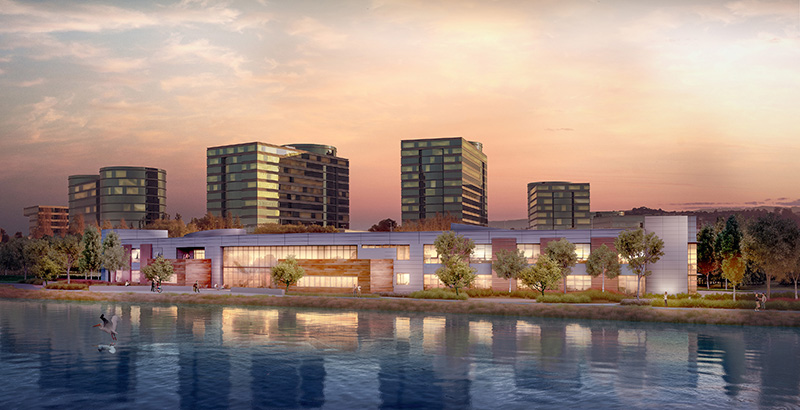 For eight weeks each school year, d.tech students enter into what they call intersessions, exploring topics outside the school walls, led by community members from small businesses, enterprise companies, and nonprofits. From the outset, says foundation executive director Colleen Cassity, Oracle employees embraced the concept. “In every instance, the students are learning from real practitioners,” she says. “It is extraordinary the school is inviting the community into the education experience.”

Already, Cerra says, students have created real solutions, earned patents, and taken products to market. And the experience is as re-energizing for the Oracle volunteers as it is transformative for the students. “Definitely an injection of fresh energy,” Cassity says, “is infectious for all of us.”

The Oracle-d.tech connection started early on, even before Design Tech, modeled after the Hasso Plattner Institute of Design at Stanford, opened its doors. Initially, says Cassity, the foundation was developing programs to spur community involvement and invited local school officials to help. Folks from the yet-unopened charter school made an impression, and the two entities teamed up to offer learning opportunities for the students using Oracle employees.

From sending six volunteers at a time for d.tech’s intersessions, Oracle’s involvement has indeed evolved. Foundation staffers designed the technical curriculum that the educators use to teach the students, and as the school moves on campus, “there are more opportunities for employees to volunteer in a wider array of capacities,” says Cassity, from coaching robotics teams to serving as guest speakers in classes.

It is up to d.tech educators to determine how much Oracle involvement the school wants. Stipulations written into the lease agreement — d.tech pays $1 to rent the building — dictate which entity makes decisions in certain areas and provide clarity around roles. “The partnership exists because of the vision alignment,” Cerra says. “Our values and [foundation] values are shared, and that helps to all come from the same page. From the beginning, there was a lot of humility around both sides. Everyone is trying to serve the students first.”

Both Oracle and d.tech know that plenty of folks, from educators to entrepreneurs, are watching, and Design Tech wants the Oracle relationship to serve as a model for what a public-private partnership can look like.

“This was certainly an extraordinary undertaking intended to challenge our peers,” Cassity says. “Our approach to philanthropy at Oracle in general is we do what we can do, and usually the right thing to do is right in front of you. Providing this extraordinary school that has a model more promising than anything we have ever seen with a home is something we could do. Hopefully we influence each other in positive ways.”