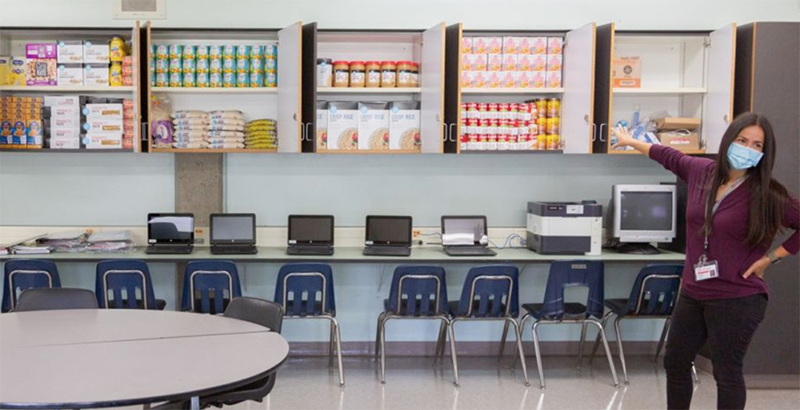 Rene Covarrublas was only at his new job at Duarte High School for one week before the coronavirus shuttered schools in Los Angeles County and across the country.

The job as the Educational Community Worker at Duarte was part of a new initiative started in 2019 by the LA County Office of Education aiming to bring together county agencies, local nonprofits, community partners, and school districts to create “community schools” in 15 different high-poverty school districts. The goal is to make the schools hubs in their surrounding communities for services beyond academics and to target the non-academic needs of children and families.

Community schools adopt the idea that inside-school learning is intimately connected to aspects of children’s lives outside of school. By only prioritizing academics, more traditional schools are not addressing many of the fundamental barriers to learning.

Assessing these needs on the ground by getting to know the students, families, and the community at Duarte High School was Covarrublas’ new job description. But those needs changed drastically when the school went fully remote with only a couple days under his belt.

His partner in the LACOE community school effort, Nathalie Umaña, who is the Community Schools Specialist at Duarte, had also recently started. But they were needed now more than ever as students and families faced unprecedented challenges.

So Covarrublas and Umaña got to work. Covarrublas called every family in the school, asking them what they needed and how they could help. Initially those needs included internet accessibility and food insecurity. Covarrublas was able to organize getting hotspots to families. Nathalie, whose role is to coordinate with community partners and locate resources, found food banks and other county programs that connected families to much-needed food supplies. Later, they found that the mental health of students and families was deteriorating, so they worked with local mental health service partners to ensure students and their families were getting the services they needed.

Lucila Osorio is one of the parents who got a call from Covarrublas when the school went remote and her daughter started taking her courses online. She had never seen a school do that before, she tells Next City through an interpreter. When her family struggled financially due to the pandemic, Osorio accessed one of the local food banks that she had only heard about through the high school.

Both Covarrublas and Umaña are employed by the county, not Duarte High School, and meet monthly with the Community School Specialists at the other 14 schools in LACOE’s program. This allowed the teams across the county to quickly identify resources and share ideas about how to best serve their families. At Pasadena High School, another school in the program, Community School Specialist John Lynch heard that the team at Duarte was calling every family and he quickly adapted the same strategy.

“We kind of stole that, to the point that we actually used the same script that Rene and Natalie were using. And so we were able to make phone calls as well at Pasadena. We have, you know, 1800 families and we prioritized calling folks who are in the farthest on the margins,” said Lynch, mobilizing some clerical staff and others at the school to help with outreach.

The idea sharing went both ways. Lynch published a local resource guide for families and students that got 1300 unique views on the school’s website. He told Umaña, who then developed a weekly newsletter that went out to families highlighting different resources.

It is this county-wide approach that makes LA County Office of Education’s model unique, and it positioned them well during the pandemic. In 2018 there were roughly 5,000 community schools across the United States, and since then the movement towards community schools has only gained momentum. Most community school models are initiated by the schools themselves or by school districts convinced by the research. But LACOE’s program goes even higher than the districts, allowing for more resource sharing at the county level and coordination among, but also beyond, school districts or individual schools. Having the personnel on the ground, but coordinating at all levels – community, district, and county – allowed for the kind of agility that these schools demonstrated during the pandemic.

For example, studies have shown that in New York City’s 215 community schools (a significant site for research on the topic), there has been $12 to $15 of return in social value for every dollar invested. School districts that have adopted the community schools model have seen an increase in attendance and graduation rates, along with higher academic achievement and improved school climate. Additionally, community schools are shown to have the greatest impact on high-poverty districts. Three quarters of the students at Duarte High School are economically disadvantaged, according to data from US News and World Report.

LACOE oversees 80 school districts, only 15 of which are currently in the community school program. Those chosen were targeted based on need.

“The intent was to start with 15 and show its growth and impact, and not just continue with these 15, but to expand to other districts. We’re just starting our third year of a three year initiative. But really, the goal is to continue the work,” said Jose Gonzalez, the director of Community Schools Development at LACOE.

The program is part of a larger trend. Another school district within LACOE, the Los Angeles Unified School District has also been running its own community school program, particularly since 2019 following the teachers strike. LAUSD is the second largest school district in the country and currently has 40 schools in its community schools initiative, with the intention of adding ten more each year for the next three years.

Lisa Bowdoin, a health teacher at Duarte, has been following the momentum that the community school model has garnered over the last few years, saying that schools are experiencing a mentality shift that opens the door to becoming a community school. Bowdoin has been at Duarte since 1999 and has seen a shift since four years ago when she and the principal, Luis Haro, worked together to explore what becoming a community school could do for their students. She attended trainings run by the UCLA Center for Community Schooling that highlighted some advantages of community schools and was quickly convinced that this was something they needed to try.

“[Our students] don’t just need tutoring in math and science. There’s another aspect that was missing,” said Bowdoin. “It’s the whole idea that we should all get together and figure out what the needs are of this child and help them instead of everyone working in isolation. And I thought ‘Oh, this is totally what we need to.’”

Still, Bowdoin acknowledged that regardless of intentions, the resources and extra sets of hands was what allowed the school to assess student needs. Everyone was scrambling when schools closed: trying to figure out how to teach online, dealing with their own technology issues, and adapting their classrooms and curricula. Overwhelmed and overworked, teachers and administrators alone simply would not have the time to devote to finding community partners, connecting with individual families, and pairing them with resources. The fact that Duarte had two people whose job it was to do just that was crucial.

But the lessons should not be limited to the pandemic.

Osorio, the parent at Duarte, sees the benefits of the community school beyond just the pandemic. With three daughters, she has interacted with the school district in Duarte for many years, but she has never felt more connected to the school as she does now. Osorio’s family speaks Spanish at home and has never been involved in parent meetings because they have never been offered in Spanish, another thing Duarte has done recently to build a broader community at the school. Over the past year Osorio has met other parents, become more involved in the school, and is more comfortable reaching out for any help she or her children might need.

“[Having a community school] is important and very critical because when you feel connected to a school site, you have confidence and that just comfort to go and ask questions about services about how your student is doing and there is no fear and asking,” she says.

“You feel part of the school when you have that connectivity to the school.”

Melanie Bavaria is a multimedia education reporter and a contributor to Next City.