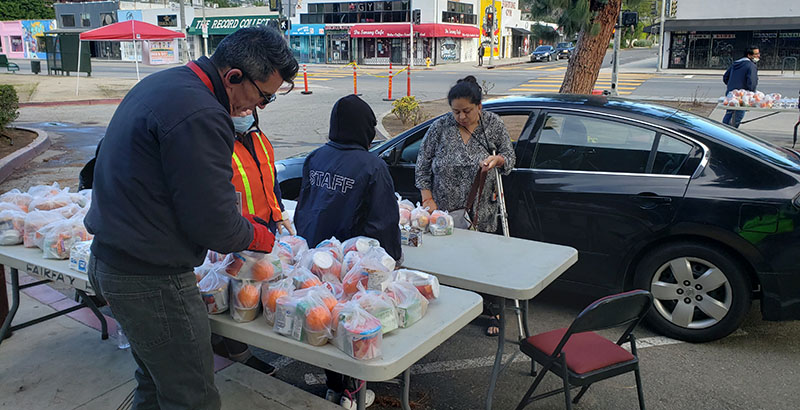 A woman gets out of her car to pick up meals for her family from one of the 60 Grab & Go Food Centers Los Angeles Unified School District created to provide food for children while schools remain closed in response to the novel coronavirus crisis. (Mikhail Zinshteyn/The 74)

All 60 Grab and Go Food Centers operated by Los Angeles Unified will be open on Friday, March 20. While the Governor and Mayor have both issued “Stay at Home” orders, they stated that they expect essential services like food centers to remain open. This is an advisory LAUSD sent out Thursday.

On a chilly Wednesday in central Los Angeles just after 7 a.m., Elena Zuniga made a pit stop at Johnnie L. Cochran Jr. Middle School to pick up bagged breakfast and lunch meals for her two children. She’d head back home to drop off the food before starting the workday — a shift at Starbucks and another part-time job later.

It’s the first day of the Grab & Go Food Centers, which are 60 sites across the L.A. area run by Los Angeles Unified School District, with help from the American Red Cross Los Angeles Region. The centers provide two daily meals for every child while the district’s nearly 1,000 campuses remain closed in response to the novel coronavirus crisis. The district, the nation’s second-largest, enrolls roughly 500,000 students and is providing a lifeline to families caught off guard by the sudden need for around-the-clock care for children who’d otherwise be in school.

“It’s important because I’m a working mom,” Zuniga said of the sites, which will remain open weekdays from 7 a.m. to 10 a.m. “It’s hard when you have two small kids.”

The center also beats waiting in line to purchase food at her local grocery store. Financially, the centers are a saver, too. Her hours have been cut at work, so she’s taking home a smaller paycheck. And with two children suddenly at home all day, the food she buys goes more quickly, especially with a ninth-grader at home.

Parents and guardians can drive or walk to the center sites, where tied plastic bags of food are neatly arranged on tables staffed by district personnel and volunteers. At Cochran and another school site that The 74 visited — Fairfax High School — the operations are large. Some 25 people are involved in the food distribution, including kitchen staff and at least a couple who guide drivers and pedestrians to the respective pick-up points. Food handlers wear face masks and disposable gloves; other personnel farther away don gloves but not masks. At both locations, at least one local police car sat sentinel on or just off the campus. 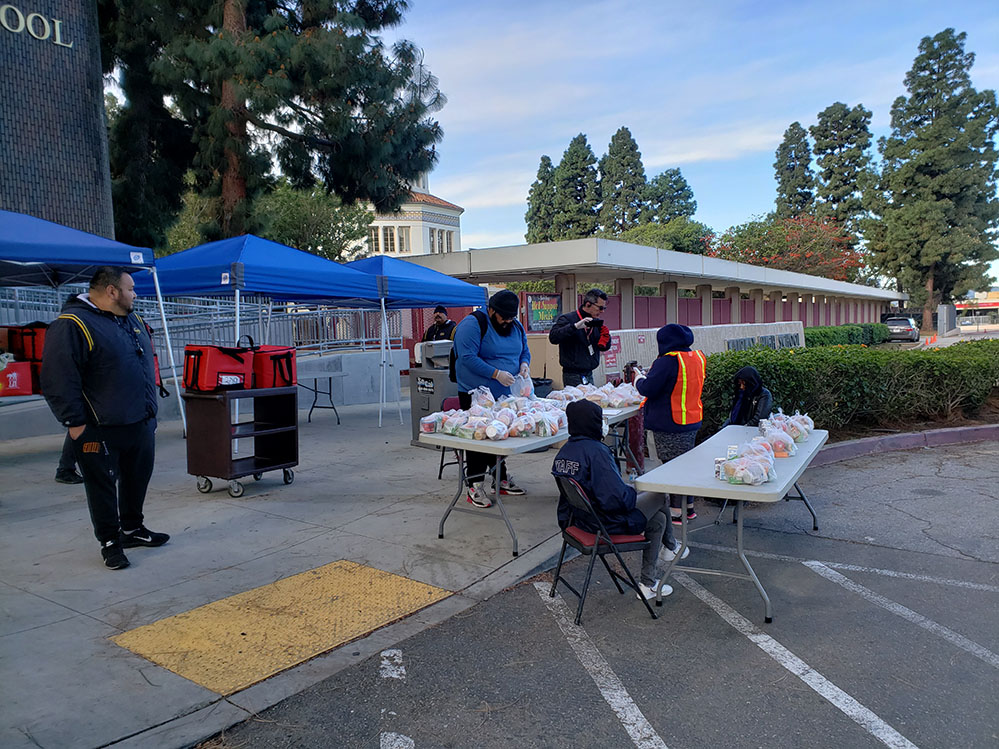 Volume varied by campus in the first hour, from around 15 to several dozen families coming through to pick up the bags —– milk, a fruit, cereal and a snack for breakfast; and a sandwich, beverage, fruit and a snack for lunch. By 9 a.m. at Fairfax, whole boxes of bagged meals remained unused. A regional district official stationed at the Cochran campus, Alfredo Ortiz, said he thinks word of mouth will likely bring out more families going forward. Wednesday evening, a spokesperson for the district said that just over 40,000 meal sets were served that morning. On Thursday, the second day, the number more than doubled, to 92,493 meal sets.

The centers are a slimmed-down version of the district’s more ambitious plans to create all-day family resource centers. But after announcing plans to open 40 of those on school campuses, the district had to narrow its scope, citing health officials’ lack of assurances that the centers would be safe for children and adults.

As of Thursday, there were 154 deaths in the U.S. attributed to COVID-19, the disease caused by the coronavirus. More than 10,700 in the country are known to be infected, according to figures tallied by Johns Hopkins University. Globally, the university says, 230,000 have been infected and more than 9,300 people have died because of the virus. Nearly 44 million of the nation’s 51 million K-12 students have been affected by school closures, according to a daily tracker maintained by Education Week.

Despite initial confusion about who is eligible for the food, adults and children, even those not physically present to pick up food, are receiving the meals. (A since-deleted tweet by LAUSD Board Vice President Jackie Goldberg Tuesday said only adults with children in tow can receive the daily meals.)

“If people request food for the adults, we will give that. We’re not turning anyone away,” said Cheryl Hildreth, an LAUSD regional superintendent who was visiting several campuses Wednesday morning.

The food distributors were up front to tell adults that they, too, could take meals. After asking how many children the food is for, one staffer at Cochran pointed to an adult driver and asked if they wanted meals as well. A beat later, the staffer said, “Just take it,” and handed the adult a breakfast and lunch.

At Fairfax, food distributors asked drivers coming through, “How many kids and how many adults?” Anyone picking up the food at Fairfax had to step out of their vehicles to retrieve the meals — part of the social distancing protocols. (At Cochran, district personnel handed the food to people while they remained in the cars.) At another high school, markers in chalk designated where people should stand to remain six feet apart as they picked up food, Hildreth said.

“You can come tomorrow, and tell your neighbors,” a woman staffing a food table at Fairfax said to a man picking up meals. “Don’t forget!”

Some parents expected to show proof that their children were enrolled. One woman who drove in alone brought her children’s student IDs with her at the Fairfax location.

That the food pick-ups are happening outside the school buildings is by design. “If people were on campus, we’d need to increase the cleaning crew,” Hildreth said. 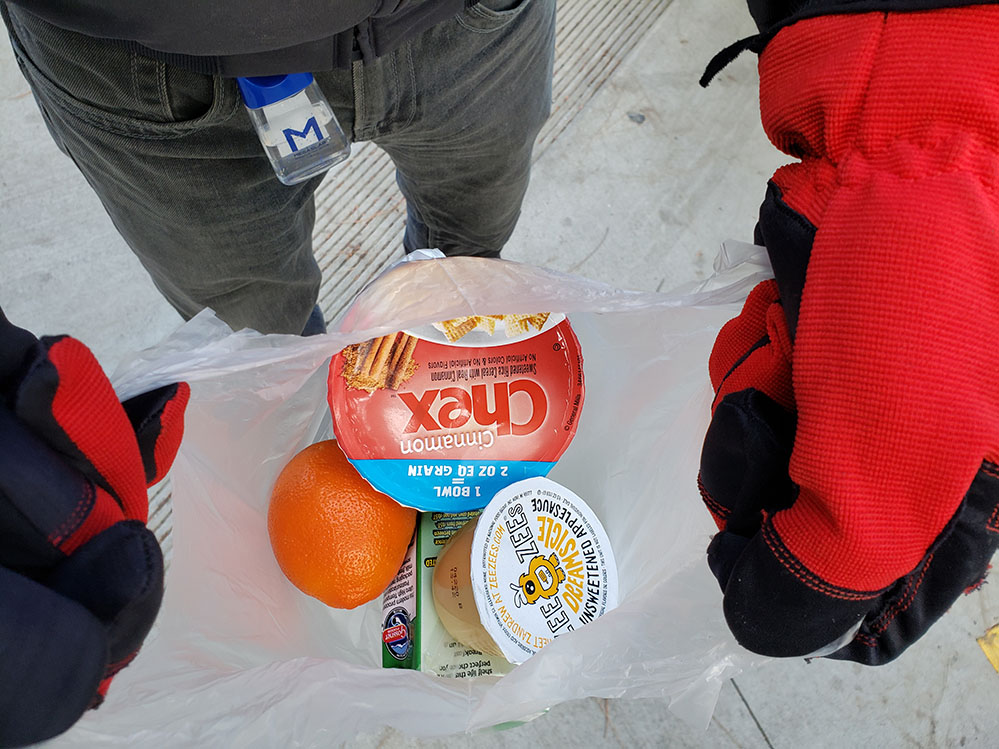 Staff and volunteers arrived just before 6 a.m. at Cochran to go over safety procedures and morning duties. One of those volunteers is Brett Kennedy, 27, who’s with the local Civil Air Patrol. He’s helping to distribute meals through a partnership between the Civil Air Patrol and the American Red Cross Los Angeles Region. “I hope this turns out really well for the families,” said Kennedy, who only received his school assignment just before midnight Tuesday.

On Thursday more than 1,200 district staff and personnel from outside groups volunteered at the centers, according to figures the district shared with The 74. LAUSD staff received $100 stipends for volunteering, but no one was told to do so, a spokesperson said.

At Cochran, America Manriques picked up bags for her children, a fifth-grader and a kindergartner. Her husband, a landscaper, is the only one who works for pay in the household, but rainy weather and cut hours means the district meals bolster the family budget during lean times. Like all students at LAUSD, her children were sent with homework packets to continue learning. The district also partnered with the local PBS stations to provide televised instruction. Her family has bided the time with family activities, like the card game Uno, but it’s been a “boring house” for her kids because of the rain, she said.

Another parent, Jennifer Raymond, walked to the Fairfax campus with her elementary-school son to pick up the daily meals. “I wanted to come get it for him to bring a little more normalcy. This is what he’s used to seeing every day,” Raymond said, though she’s not sure if she’ll return for more meals. Her son has been making his way through the instructional packet his school provided to keep up with learning. He also relies on an online instructional component his school and others in the district use through the website IXL.

The centers are set to remain open until schools go back in session, but when that will happen is increasingly unclear. An earlier district announcement indicated that schools will reopen in early April, but California Gov. Gavin Newsom said Tuesday that families should prepare for schools to remain closed for the remainder of the school year.

Even if the closure lasts indefinitely, Hildreth, the LAUSD regional superintendent, said that the mix of state and federal exemptions, waivers and guidance can get the district closer to the goal of doing “whatever needs to be done to support students and families in a time never seen in our lifetimes,” she said. “That’s not just going to be a school issue [if closures remain long-term], that’s a community, that’s a country issue.”