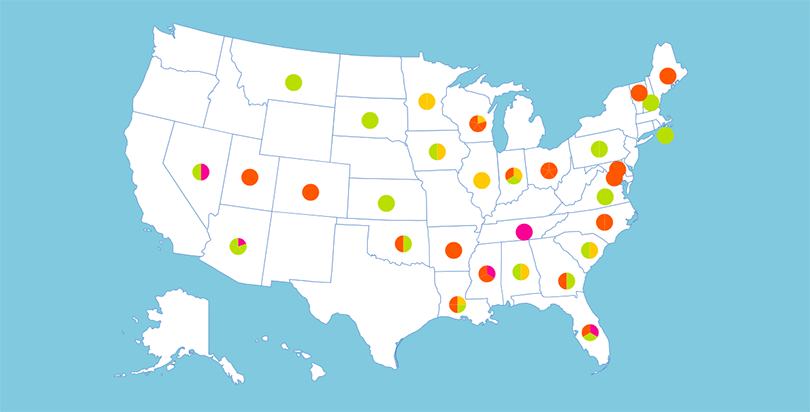 See more coverage of School Choice Week 2017
“As your president, I will be the nation’s biggest cheerleader for school choice,” President Donald Trump said in September.
If, as promised, he dedicates $20 billion in federal funds to expand school vouchers for children living in poverty, he will be riding a wave of growing popularity for programs that help parents pay for private schools.
The number of private education choice programs around the country more than doubled between 2010 and 2016, according to research and advocacy organization EdChoice. Today, 27 states and Washington, D.C., have some sort of program, and some have more than one type, according to the National Conference of State Legislatures.
(The 74: New Poll Shows 75% of Millennials Support School Choice)
Fourteen states and the District of Columbia provide vouchers that give private schools state funding to pay tuition for students, primarily those who are low-income, have special needs or attend poor-performing schools, according to the conference.
Seventeen states, including Indiana and Florida, have tax credit scholarship programs under which a nonprofit scholarship-granting organization is formed to collect donations from individuals and/or corporations, who then get a tax credit; the nonprofit gives private school scholarships to qualifying students.
Eight states give tax credits or deductions to parents who send their kids to private schools, according to EdChoice. Indiana and Louisiana allow families to deduct tuition on their taxes, while Illinois and Iowa let parents claim a tax credit for their children’s private school tuition.
In five states, including Arizona and Mississippi, education savings accounts let parents choose how to spend the state’s per-pupil allotment for their child’s education — whether it’s putting them in private school or paying for tutoring.

The different types of school choice programs available across America, state by state. (Courtesy EdChoice)
Programs like these have increased since Republicans won the House of Representatives, the Senate and several gubernatorial seats in 2010, said Josh Cunningham, a senior education policy specialist at the National Conference of State Legislatures.
“Since 2011, each year we see a few more states added to this list,” said Cunningham. “Pretty much all of the Southern states have some sort of private choice.”
But as state lawmakers seek to create more programs, critics are ramping up legal and political opposition. The result has been a patchwork of competing decisions in state and district courts that are making their way up to the U.S. Supreme Court.
Meanwhile, activists and politicians are preparing for intense state legislative battles over the future of these programs. Here are five areas where that debate is likely to become even more contentious.
Douglas County, Colorado
Program Type: Voucher
Battleground: U.S. Supreme Court
Why It’s Interesting: The case could decide the constitutionality of voucher programs nationwide
Six years ago, the Douglas County School District started a Choice Scholarship Pilot Program, which awarded taxpayer-funded scholarships for qualifying elementary, middle and high school students to attend private schools. The district kept 25 percent of the per-pupil funding and gave vouchers for the rest, about $4,575, to the parents, who would then sign it over to private schools. More than nine in 10 participating students chose religious schools.
The American Civil Liberties Union and Taxpayers for Public Education, a Colorado-based nonprofit, sued, claiming the program violated the Blaine Amendment, a provision found in 37 state constitutions that prohibits public money from funding religious schools. Voucher supporters argue that because the money first goes to the parents, who then choose religious schools, the program itself is neutral.
The Colorado Supreme Court disagreed, and the district asked the Supreme Court to determine whether the Blaine Amendment is biased against religion. A related case, from Missouri, is already before the court; Blaine Amendment cases have also been raised in Montana, Nevada and Florida, where the state’s top court last week refused to hear a challenge from the teachers union.
“If the court … holds that government cannot discriminate against religion when it comes to public benefits, that would put an end to school choice opponents’ attacks to these programs with Blaine Amendments,” said Michael Bindas, a senior attorney at the Institute for Justice who represents families in the Colorado case.
Nevada
Program Type: Education Savings Account
Battleground: State Legislature
Why It’s Interesting: Democratic pickup could stall the program
Two years ago, Gov. Brian Sandoval signed into law one of the most sweeping education savings account plans in the country, giving families about $5,100 a year for tuition outside public schools. Some 8,000 families applied, but in September, the Nevada Supreme Court ruled the funding mechanism behind the program unconstitutional.
That left legislators scrambling to find a new funding plan — and they are still looking. In November, Democrats took the majority in the House and the Senate with help from the Nevada State Education Association, which opposes education savings accounts. Chris Daly, the union’s deputy executive director, said his members want the program revoked.
Sandoval said in his “State of the State” speech earlier this month that he hopes to spend $60 million over the next two years on education savings accounts, eliciting mixed reactions from lawmakers.
Democrats could stop the program by simply stalling a vote on funding. But the new Assembly speaker, Las Vegas Democrat Jason Frierson, told the Las Vegas Review-Journal late last year that it was too soon to predict what the party will do.
State Sen. Scott Hammond, the Las Vegas Republican who crafted the bill, said he hopes Democrats will work on a new way to fund the program. “The leadership of the Democratic side has said this is not a dead issue,” he said. “There is a heartbeat.”
WATCH: Flashback — Desperate Nevada Parents Await ESA Ruling

Texas
Program Type: To Be Determined
Battleground: State Legislature
Why It’s Interesting: Lt. Gov. Dan Patrick has pledged to bring private school choice legislation in “session after session” until it passes
Call Texas the place where school voucher legislation goes to die.
State lawmakers have debated vouchers for decades. As early as 1994, then-gubernatorial candidate George W. Bush rallied in support of vouchers, while Democratic Gov. Ann Richards and the state teachers association were opposed.
Now, Lt. Gov. Dan Patrick has vowed to make school choice legislation a priority during the next legislative session. “I intend to fight for school choice, session after session after session,” he said in October. “It’s not going to hurt public schools. It’s going to make them better.”
Patrick cannot propose his own legislation, but he can help push other lawmakers’ bills through as state Senate president. In 2015, his first year, Texas’s Senate approved a tax credit scholarship for some special-needs students and low-income families; it never got a hearing in the House because of resistance from rural Republicans and Democrats. The same coalition will likely oppose any future voucher legislation, but state and national politics have shifted.
“There might be some effect from the presidential election that might [create] more appetite for [school choice legislation],” said Charles Luke, coordinator of the Coalition for Public Schools. “I do think we are looking at a difficult battle again.”
Another wrinkle is a recent investigation by the Houston Chronicle, which found that the state Department of Education had effectively limited the number of special-needs students receiving extra support. Gov. Greg Abbott has suggested that more school choice could ease Texas’s special-education woes.
Maryland
Program Type: Vouchers
Battleground: State Board of Education, Legislature
Why It’s Interesting: A blue state is considering expanding its voucher program for needy kids
Maryland is not generally considered fertile ground for voucher-like initiatives. Its liberal electorate and opposition from groups like the teachers union, school boards and school superintendents have created many roadblocks.
But the tide may be changing.
Last year, the Democratic-controlled legislature approved a state-funded scholarship program for low-income families who want to send a child to private or parochial school. Then, in December, Gov. Larry Hogan proposed increasing funding for the voucher program — attracting opposition from some lawmakers and the state teachers union. The program took more heat recently when a report revealed that most of the recipients were already attending private schools, not transferring out of failing public schools.
Maryland’s state school board has also begun talking about bringing more options — including vouchers — to students stuck in persistently low-performing schools, as it works on implementing the new federal Every Student Succeeds Act. Any new voucher program would have to be approved by the governor and the legislature.
A new state commission is also preparing recommendations for the legislature to re-examine funding and other policies to improve education in the state.
Wisconsin
Program Type: Education Savings Account
Battleground: State Legislature
Why It’s Interesting: State already has several voucher programs; Republicans want to add ESAs to the mix
Wisconsin is loaded with private school choice programs. There are three voucher programs for kids in poverty and one for special-needs students. The state also offers a tax deduction for private school tuition.
Now, Republican legislative leaders are mulling adding education savings accounts to the mix. Rep. Jeremy Thiesfeldt said ESAs could allow parents to put pre-tax money aside to take an online course, buy books or even purchase a computer for instruction.
Wisconsin’s political winds are on the side of choice: Previous votes on voucher programs have broken along traditional party lines, and Republicans just increased their majorities in both the House and Senate.
See more coverage of School Choice Week 2017
Submit a Letter to the Editor
January 22, 2017