Allen: It’s #LoveTeaching Week. Here’s Why I Became a Teacher — and How One Philadelphia Summer School Student Became My Inspiration 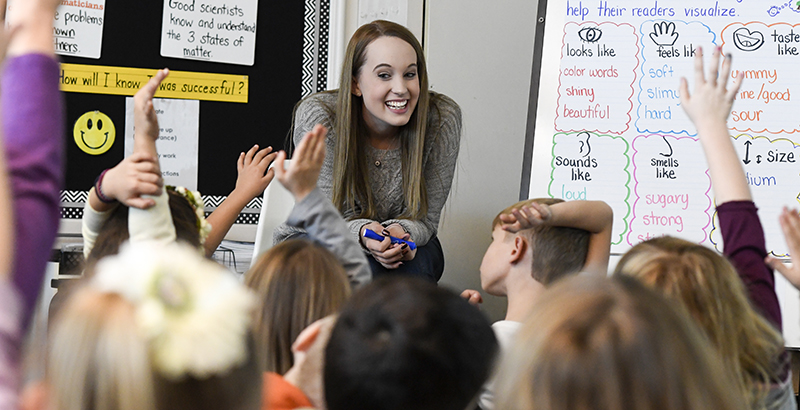 In honor of #LoveTeaching Week, which started on Valentine’s Day and ends Thursday, I want to share my story of why I chose to teach and how one student became my personal inspiration to continue working tirelessly for teachers and advancing student outcomes.

I officially started my teaching career in fall 2011 in Philadelphia, but I had been pursuing a career in education long before that. My mother, a full-time educator for more than 39 years who still volunteers twice a week in an elementary classroom, taught me that education is the key to life and that the work she did in her classroom allowed others to find their path to happiness. I was hooked.

I spent evenings during high school tutoring younger students and went on to pursue an education degree in college. After receiving my elementary and reading licenses in Indiana, I traveled east to teach with Teach for America. As a young educator, I thought, what better way to serve my nation than to teach in a place where I am needed most? But it was also what I needed most. I am forever grateful for the opportunity to educate and coach students from backgrounds far different from my own. The more than 500 students I have had the pleasure to teach have taught me more than I could have ever imagined. The intersections and lines of difference have made me the person I am today.

My first educator assignment with TFA was in a summer school chemistry class at Frankford High School in Philly. That first day, I was terrified, as 20 students ranging in age from 16 to 23 stared back at me as they shuffled through an assignment on the periodic table of elements. We were asked to have one-on-one conversations with each student, and I took it very seriously, learning unique things about each.

One in particular struck me. A young man, very tall and athletic, sat at the desk across from me, and I asked why he was in summer school chemistry. I expected the same answer I had received over and over: “I failed.” But this time, it was different. His eyes welled up with tears and he told me he had had chemistry first period, but due to public transportation issues, he often had not been able to get to school on time and had been often marked absent or late. This resulted in a failure for the course, and worse, a lack of a future. You see, this young man was a football star, but because of his poor grades, he was not going to be allowed to play during his senior year and his coach refused to send his highlight tapes to college scouts. This huge kid was just sobbing across from me without any hope for his future.

I didn’t know what to do. This raw, genuine emotion was not something I expected from a student who barely even knew my name.

I tried to calm him down, and we worked out a plan. He would do his best to be early everywhere he went. He would pass his summer school classes, history and chemistry, and we would talk to the coach about his improvements at the end of the summer. Just having one educator in his corner changed that young man’s perspective. He got it together and passed summer school, and I held up my end of the bargain. Unfortunately, I lost touch after we parted ways that summer, but he was the catalyst for my work now. I will never stop fighting for students to have access, opportunities, and multiple pathways to success. In my classroom and in my life, there are no dead ends.

Educators are change makers. I thank every educator whom I have been blessed to learn from and to work with during the past 30 years. During this #LoveTeaching Week, let an educator know how much of an influence he or she has had on your life. Who knows? Maybe that teacher will share the impact you made on his or her life.

McKenzie Allen is director of advocacy at the Association of American Educators Foundation and a former educator. She has spent much of her career working in education policy and advocacy that focuses on more equitable outcomes for students and teachers across the United States. She currently resides in Baltimore.

McKenzie Allen is director of advocacy at the Association of American Educators Foundation and a former educator. She has spent much of her career working in education policy and advocacy that focuses on more equitable outcomes for students and teachers across the United States. She currently resides in Baltimore.