All Over the Cap: The Fight for the Future of Massachusetts’ Charter Schools

In early October technicians working the master controls at local TV stations across Massachusetts will unleash a torrent of education issue ads – the first shots fired in what is likely to be one of the priciest school battles ever seen.
The conflict concerns a relatively simple question that will appear on the Massachusetts ballot in November: should the state lift the cap on the number of charter school seats it permits to allow 12 new or expanded charters a year?
But there’s nothing simple about this fight, which is ripe with national implications and likely to draw in national combatants.
The stakes: If the teachers’ unions and district superintendents can stop charter schools in Massachusetts — the state that boasts the highest performing charters in the country — then charters are at risk everywhere.
Blocking them in places such as Florida and Ohio, where low-performing or corrupt schools have made headlines over recent years, should be easy compared to Massachusetts, where some charters are so effective they have erased racial learning gaps.
Political insiders believe the vote will be close. On one side are the parents of the 36,400 students already in charters, combined with the parents of the more than 30,000 kids on wait-lists across the state, who are likely to vote to lift the cap. On the other side: a very high percentage of voters in the union-friendly Pioneer Valley in Western Massachusetts are likely to vote against lifting the cap.
Ironically, the fate of the referendum will probably come down to a unique set of swing voters: the suburban centers along the I-495 ring outside Boston that have no dog in this fight. Their schools are unaffected by charters.
To put the question bluntly: Will the well-off white residents of Wellesley, Lexington, Newton, and Hopkinton vote to open up more charter school seats for low-income black and brown students from Roxbury, Dorchester, East Boston, and Mattapan?
It’s unclear. 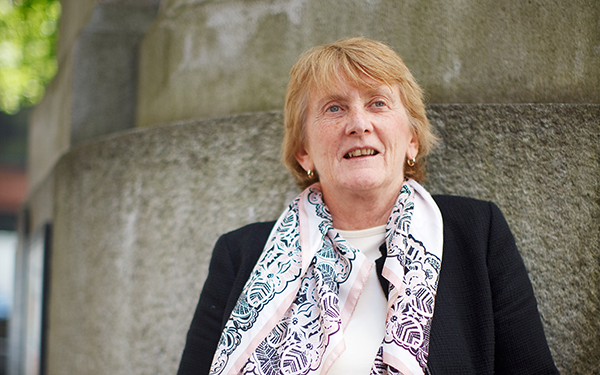 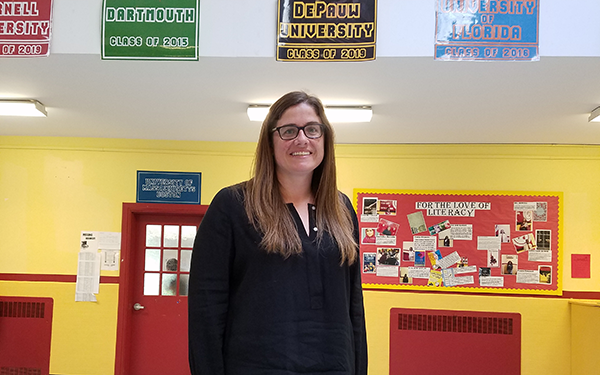 Photo: Sharon Liszanckie
Sharon Liszanckie, Boston Prep’s executive director, has a plan to make a dent in the wait-list: double the number of students in grades 6-12 and add a fifth grade. Adding that fifth-grade year would give her students, who arrive at the school between two and three grade levels behind, a full two years to catch up on their academic skills before more challenging classes begin in seventh grade.
“Doing that much catch-up in just one year before the considerable jump in rigor in seventh grade is a challenge,” said Liszanckie. A larger school would also allow more teacher specialization, she said, and more course offerings.
The roadblock, of course, is that the state cap currently blocks the expansion. Liszanckie, who once taught seventh-grade math in Wellesley, knows her cap-lift fate rests on those affluent suburban centers around Boston, the parents whose children she once taught.
She’s in a good position to see the “unequal playing field” between places such as Wellesley and Hyde Park. “Your zip code should not justify what educational opportunities and resources you have available to you,” she said. 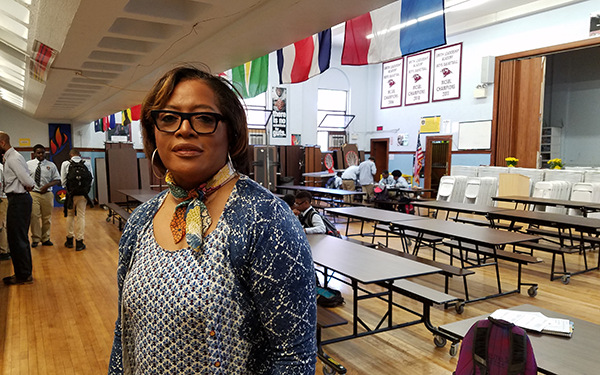 Photo: Karmala Sherwood
Karmala Sherwood, who runs the Afrocentric Helen Y. Davis charter school, can make a slightly different case for expanding her middle school, which now enrolls 216 students in grades 6-8. At a time of much hand-wringing over white charter leaders heading up all-minority charters, Davis is an exception: all of its top leaders are African American. Anywhere you walk in the school you find walls used as full-length murals featuring African-American leaders.
Sherwood says 95 percent of her students are high needs and yet they turn in strong academic results.
The school has a wait-list of 250 students for 85 seats, but that isn’t their core argument for expanding into a high school. What’s missing in area high schools, says Sherwood, is the unique culture for African-American students that is found at Davis.
“When the school began in 2003 I was okay with just a middle school,” she said. “We filled that niche and made sure we closed gaps. But then as time went on parents kept saying they really wished we had a high school. They said they liked our sense of making sure students understood culture and leadership.
“The message from us is that [any student] can be a leader. They can be who they want to be. I don’t think they get that message from other schools … We really feel our work is not finished when they graduate from eighth grade.”
But Sherwood’s school is also blocked by the cap. 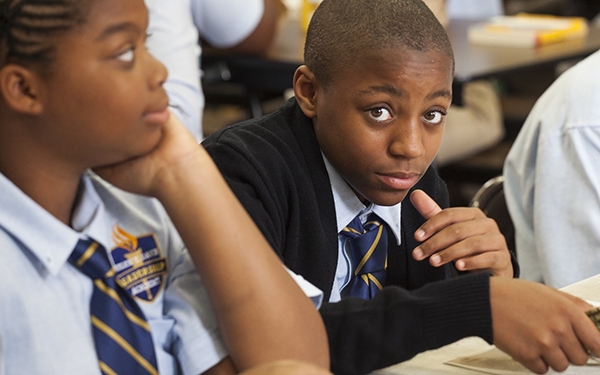 How will it all turn out?
That’s impossible to predict; these are the days of Trumpism, Brexit votes and Marine Le Pen’s National Front in France. The “elite” leaders are under challenge. Here, though, it’s not clear which side will be seen as the elite. It could be the financiers funding TV ads or it could be the union bosses.
In theory, the wealthy white suburbs will vote to expand charters to help minority kids in Boston. But an aggressive campaign by the unions, with the message that one day charters might threaten suburban schools, could conceivably give these voters second thoughts.
Also in theory, the superintendents and school committees will act in unified opposition. But I found one superintendent, John McCarthy, from the coastal town of Scituate, who plans to vote “yes” on expanding the cap.
As it turns out, McCarthy’s daughter is a veteran teacher for Rocketship charters in San Jose and he has spent time in the network’s schools. Without Rocketship, McCarthy asks, what are the schooling options for East San Jose kids?
In Massachusetts, said McCarthy, “You could save a lot of kids if you opened up the cap a little bit.”
At the Easthampton Democratic Committee meeting, school committee member Peter Gunn offered an insightful comment on the dilemma: He opposes lifting the cap, but he doesn’t take issue with parents who send their children to charters. Rather, he takes issue with those who “created a law which forces families to choose between doing what’s good for their children and doing what’s good for their community.”
That’s a candid assessment of the standoff here: Both the unions and superintendents much prefer the traditional world of schooling, where kids get funneled into a single, traditional district regardless of the quality of the assigned school. The “common school” model is better for the community, they say.
Easthampton charter leader Amy Aron, who runs the Hilltown Community Charter School, sees it differently. “The union feels like it owns the tax dollars. But these are public schools and these are public school children. The money belongs to the child.”
And that’s a key question: Does the money belong with the traditional school districts or the child?
Given the multiple distractions on the ballot — Hillary, Donald, farm animals, and dope — it seems unlikely that question with get the full attention of many voters.
“People won’t be going to the polls thinking of charters,” said Glenn Koocher, executive director of the Massachusetts Association of School Committees. “They will be going to vote for Hillary or Donald.”
As for the charter question, it will probably come down to which side delivers the most effective ad blast in the last hours before the vote.