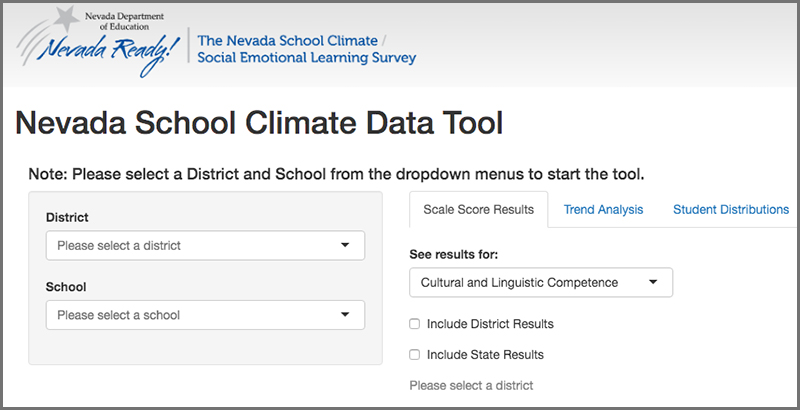 These are adjectives that any parent, teacher or student would want to use when describing their school. Together, they create the necessary climate for learning and maturing. However, it is only recently that schools, districts and states — in large part due to the Every Student Succeeds Act — have treated school climate as a serious, measurable component of school quality.

“What has been forgotten [in school assessment] until most recently is climate,” said Christian Villenas of the National School Climate Center. “School climate is the quality and character of the school life.”

In Nevada, a new tool developed by the state Department of Education and the American Institutes for Research treats school climate information with as much seriousness as test scores. Available on the Nevada Department of Education website, the tool takes data from annual student surveys and puts the information online in searchable form, so parents and teachers can compare the stats to the experiences of specific students and gauge whether a school they may be considering provides an environment conducive to learning.

The department wanted to “put the data back in the hands of the people we took it from,” said Amber Reid, a social worker with the department. The state was already collecting the information through the Nevada School Climate/Social Emotional Learning Survey, but the results had remained primarily in-house.

The tool will “help pinpoint when a school needs extra support to improve school climate, as well as empower parents on how they can support their child’s school,” Nevada Superintendent of Public Instruction Jhone Ebert said in a press release.

The survey was created in 2015 as a way to allocate social workers and mental health professionals funded through a state block grant. It gauges students’ perceptions of their school’s culture and their own social-emotional skills in four areas: cultural and linguistic competence, relationships, emotional safety and physical safety.

This year, the Nevada legislature added another pot of money, $74 million in grants for school safety initiatives, tied to the survey results. Many states have considered school safety bills that would increase funding for security policies and personnel, mental health services and social-emotional learning. For Nevada, the existence and widespread use of the school climate survey was a boon for its school safety bill, Reid said, because the measurements needed to allocate the grant funds were already being collected.

Here, the interactive tool’s comparison function is key. Since Nevada’s county-based education system has a wide variety of demographics — ranging from Clark County, the nation’s fifth-largest district, to 78-student Esmeralda County — if large schools are experiencing different results than small schools, or urban and rural schools post very different results, that could inform how the state allocates resources and how communities perceive their own challenges.

The data also show schools’ responses to interventions over time. This is important for identifying trends that can tell which outside factors might be influencing school climate, Reid explained.

Though student engagement is one of the indices included in Nevada’s school report card under ESSA, it was important to the department that the survey results not be included in school scores, because officials wanted accurate information and didn’t want students to feel pressured to respond a certain way.

School safety and school climate have a complex interconnection, Villenas said. Although some legislatures have embraced school climate initiatives in the wake of mass shootings or other high-profile instances of violence, school safety and climate have to take other issues into account as well, he said; no legislature should consider one to be a replacement or proxy for the other.

“It’s not just a single issue that impacts the learning environment of the student,” Villenas said.

Enthusiasm for school climate measurements has increased as researchers have observed the way students’ experience of school affects their ability to learn. Feeling connected and safe contributes to improved academic performance, which leads to feelings of pride and competency, which leads to a more celebratory and engaged school climate, and the virtuous cycle continues. The opposite is true as well, he said: Students who feel that their school doesn’t care about their future, or who are afraid for their physical and emotional safety, will not perform well in class. The negative feedback will reinforce their perception that they cannot thrive.

“It creates a disassociation with the school,” he said, so students don’t want the academic and social-emotional growth the school offers. If the vicious cycle takes over, they may begin “acting out against the environment,” which can lead to suspension, expulsion and leaving school altogether.

Efforts to measure school climate are still in their infancy, Villenas said, but gathering data is the first step in taking the subject seriously.

For its state report card, the Nevada Department of Education chose to use a school’s survey participation rate, rather than outcomes, to measure student engagement. Schools with at least a 75 percent participation rate received bonus points.

The department did, however, want parents to see that the data are being analyzed and taken seriously, Reid said, as it shows that the state is emphasizing what matters to families.

The new school climate dashboard, currently on its own website, could eventually be linked to the state report card website, but it’s important that the two measurements remain distinct, Reid said. The hope is that students, parents and community members will use the school climate data for getting a sense not only of what the school’s situation is but also of how they can help.

“The Clark County School District [Las Vegas] has a fantastic partnership with the My Brother’s Keeper Las Vegas chapter, and many of our districts partner with their local Boys and Girls Clubs statewide,” she said. “We also know that several of our community partners use school and education data in grant application and reporting, so we hope this will be additional information that they will find helpful in those efforts.”