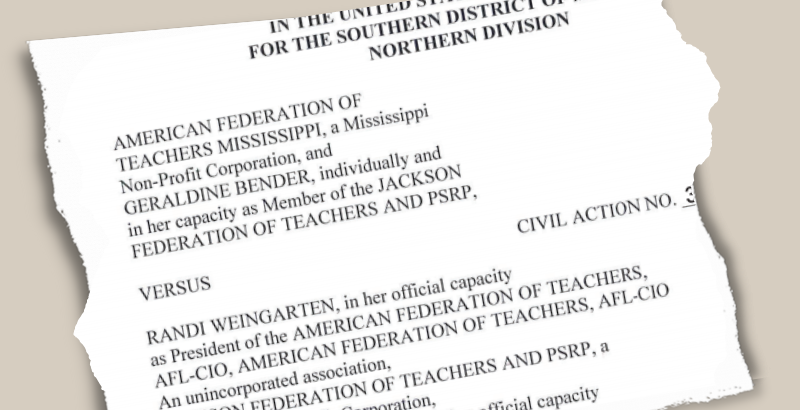 American Federation of Teachers Mississippi filed a lawsuit against the national union and its president, Randi Weingarten, alleging “breach of fiduciary duty” and “tortious interference” arising from a dispute over unpaid dues from its Jackson local.

The existence of the lawsuit was first reported by Jackson Jambalaya, a local news blog.

According to the suit, filed in April, the Jackson Federation of Teachers fell behind in 2018 in passing state and national dues up the chain to AFT Mississippi and AFT national. The state union asked the national union to investigate.

AFT national did eventually send auditor Yhasmine Bryan to examine the Jackson books, but she was limited to inspecting check stubs and bank statements, with little or no supporting documentation. Nevertheless, she turned up a host of irregularities, which she reported to AFT and the Jackson local in January 2020 — but not, evidently, to AFT Mississippi.

Not mentioned in the lawsuit, but evident from a review of the Jackson Federation of Teachers’ IRS financial disclosure report for 2018-19, is a loan to Stout for “credit card.” The original principal amount was $4,995, but the balance due was $8,366. The report reveals that the loan was neither approved by a union board or committee nor established by a written agreement.

When AFT Mississippi finally received a copy of the auditor’s report, it called on AFT to place an emergency administratorship over the Jackson Federation of Teachers.

“The JFT failure to pay the AFT MS has caused critical cash flow shortages which is now impacting the AFT MS’ members and its ability to solicit and retain new members,” wrote AFT Mississippi President Geraldine Bender in an April 28, 2020, letter to AFT national.

In a reply dated May 14, 2020, AFT Secretary-Treasurer Loretta Johnson stated that while there had been “significant deficiencies” in Jackson’s finances “in the past,” they did not rise to the level of the “immediate threat” required by the AFT Constitution to impose an administratorship.

The lawsuit alleges that AFT national and the Jackson local entered into a repayment agreement in June 2020 without the participation or knowledge of AFT Mississippi. The agreement requires the local to repay the state union almost $115,000 over eight years, without interest or penalty. Even under these generous terms, the state union says it still hasn’t received any money from the Jackson local.

Although the suit is a civil complaint, AFT Mississippi accuses Stout and the Jackson executive board of “misusing funds for a wide range of personal expenditures,” “severe financial crimes” and embezzlement of “significant sums of money.”

Additionally, it accuses Weingarten of a breach of fiduciary duty by condoning the alleged crimes, and Johnson of covering for Stout, her “close and personal friend,” according to the filing.

In an email, Weingarten responded:

“A personality conflict between two strong-willed leaders in Mississippi should not rise to the level of a legal dispute. The lawsuit filed by AFT-Mississippi is completely without merit. This matter should have been easily and amicably resolved, but unfortunately, it’s driven by personality and politics instead of the law.

“The AFT fully investigated the alleged claim made by AFT-Mississippi that the Jackson Federation of Teachers was behind on paying dues to the state federation and the national AFT. We recommended a way for the JFT to pay back the dues it owed to both. The findings of the initial investigation were reviewed by the JFT board, and nothing nefarious was found.

“We offered to resolve this matter and all the related issues. AFT-Mississippi rejected this approach. … Sadly, a personality conflict that should have been easily resolved will now be packaged into a lawsuit that could potentially cost members hundreds of thousands of dollars in dues that come directly from their hard-earned paychecks.”

A lot of this may seem overblown, but AFT affiliates have had some major financial scandals in the past. In Florida, longtime United Teachers of Dade President Pat Tornillo spent at least $650,000 in union dues on gifts and trips for himself. The list of items seized by the FBI in 2003 that Washington, D.C., Teachers Union President Barbara Bullock bought for herself with union dues “reads like the manifest of a pirate ship, firearms and all,” according to one reporter. And Sally Jo Widmer somehow managed to swipe at least $800,000 in union dues during her decades-long stint as president of New York’s tiny, 390-member Auburn Teachers Association.

AFT might not want to establish an administratorship over the Jackson Federation of Teachers, but it has rarely been so self-restrained in the past. The national union has been notorious for taking over locals that want to disaffiliate.

In addition to the lawsuit, AFT Mississippi threatened to file a complaint with the U.S. Department of Labor, which means a federal government investigation could loom in the future.