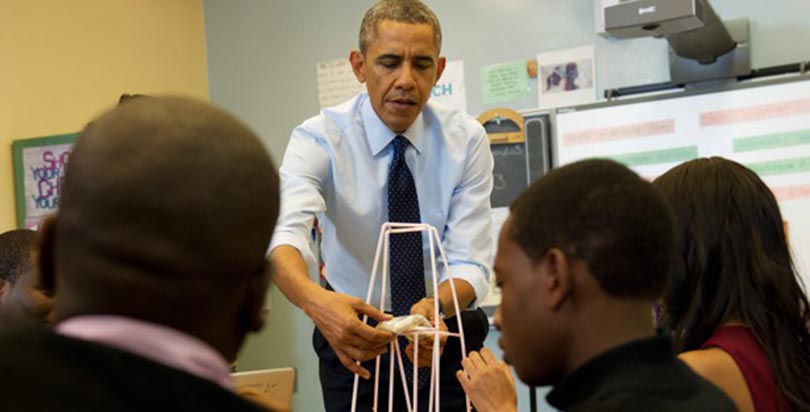 New York City
As a sophomore in Brooklyn’s Sheepshead Bay neighborhood, Keron Blackman recalls being distracted from schoolwork, hanging out with friends who left him doubting he’d have many new opportunities to look forward to.
Blackman, 17, the oldest of five boys, said his mother learned about a new school called P-TECH, in Crown Heights, where students focused on science, math, technology, and engineering and could earn a two-year college degree while in high school. A big draw was that the college degree was free. Another, Blackman said, was Barack Obama’s 2013 visit — during which the 44th president called the school “a ticket into the middle class.” His mother considered that the ultimate endorsement.
“My mom basically wanted to protect me from myself and other distractions that were happening at Sheepshead,” Blackman said during a recent interview at the school, in a room whose walls are covered with larger-than-life photos of students and their principal, Rashid Davis, beaming next to Obama during the former president’s visit.
Blackman, now a senior and in the vanguard of the school — part of its first graduating class since P-TECH was launched by IBM and partners in 2011 — expects to finish his associate’s degree in December. He said he’s “keeping his options open” on what to do next — he might continue school to get a bachelor’s degree, accept a job at IBM, or maybe do both.
Students like him — young men of color, often from low-income families, and who are statistically far less likely to graduate high school than their white peers — are the kind P-TECH was designed to help transition from high school to college and the workforce.
Pathways in Technology Early College High School began with a lofty promise: All students will complete grades 9–14, earning their high school diploma and an associate’s degree — at no cost to their family — within six years. Most students would complete internships at IBM or other businesses, like Microsoft, Cisco, and ConEd, and graduates would be first in line for jobs at IBM with $50,000 starting salaries.