After Scalia, a 4-4 Friedrichs Decision? Lawyers Say There’s Precedent to Demand a Re-Hearing 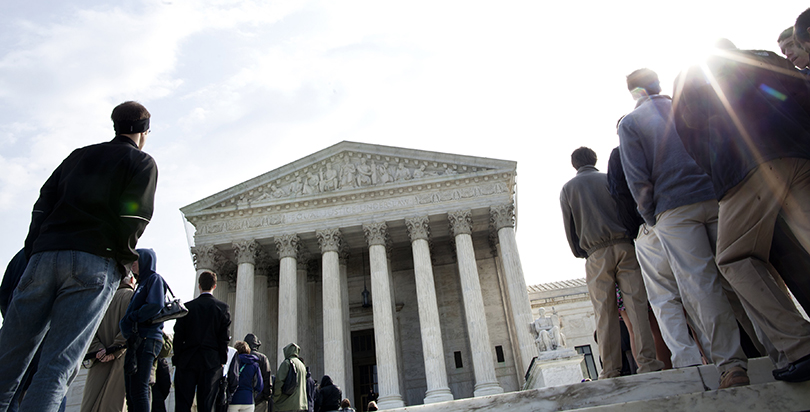 The sudden death of Justice Antonin Scalia Feb. 13 sent the political and judicial worlds into a tailspin as politicians, lawyers, historians and commentators debated possible replacements for the long-serving conservative stalwart — as well as the possible outcomes of several high-profile cases currently pending before the court.
Perhaps the biggest case to be impacted by Scalia’s death is Friedrichs vs. California Teachers Association, in which Rebecca Friedrichs and other California teachers argue that forcing them to pay any union dues violates their First Amendment rights.
Friedrichs 101

Following oral arguments in early January (read The 74’s coverage from inside the court), many thought Scalia, the potential swing vote in the case, had come down on the side of those arguing against the dues, all but ensuring a 5-4 victory for the plaintiffs. (Read our analysis of how the unions lost three key SCOTUS swing votes)

However, no decision at the court is final until it is announced, so Scalia’s death is likely to lead to a 4-4 tie verdict. The end result of a tied ruling: The high court affirms the lower court’s ruling. In the case of Friedrichs, that would mean the Ninth Circuit’s ruling upholding the mandatory dues, based on a ruling precedent from the 1970s, would stand. Friedrichs and the other plaintiffs would lose.
Court observers have been debating what happens next with the Friedrichs case, following a likely 4-4 ruling. Late last week, they got their answer. The Center for Individual Rights, the group representing Friedrichs and her fellow teachers, announced Wednesday in the event of a tie, they would officially ask the Supreme Court to reevaluate the case, and re-hear arguments, once a ninth justice has been appointed.
“We feel strongly that our case is important. It raises a fundamental issue of individual rights and the ability of tens of thousands of public employees to participate in the political process” on equal footing with everyone else, CIR President Terry Pell told The 74. “Only the Supreme Court can resolve the question in our case.”
There is apparently precedent for a court re-hearing arguments when a justice departs mid-term. Pell points to a Feb. 14 post by SCOTUSblog publisher Tom Goldstein that lays out several cases in which the court re-heard arguments in narrowly decided cases following the departure of one justice and appointment of another.
The most relevant example occurred in 1954. Justice Robert Jackson died suddenly at the beginning of the court’s term. The court several months later re-heard arguments in three cases following the appointment of a new justice, Marshall Harlan II. Two of the three cases were decided 5-4.
There’s also more recent examples, Goldstein wrote. The court re-heard arguments in two cases shortly after Justice Clarence Thomas joined the court in October 1991, and in four cases after Justice Anthony Kennedy joined in February 1988.
Pell says a tie lacks closure, and that the Supreme Court should re-hear as a means of giving a final, authoritative answer so that the everyone, unions and their adversaries alike, can move on. “The idea of a smoothly running democracy depends on getting these kinds of fundamental question about individual, constitutional rights answered in a timely fashion.”
There is, of course, a risk that waiting until a ninth justice is appointed, either by President Obama or a possible Democratic successor, would result in a 5-4 decision against Friedrichs and the other teachers opposed to the mandatory dues.
Pell said the group isn’t taking for granted that a justice appointed by a Democratic president would necessarily side with the unions, just as it wasn’t a certainty Scalia, a staunch conservative, would side with those opposing the mandatory dues.
“It was an uphill struggle to secure his vote, and at least during oral argument, it looked like we’d succeeded,” Pell said. “For the same reason we didn’t take justice Scalia’s vote for granted, we’re not going to the take of any new justice for granted, and we will fight hard to secure the [support of the new] justice, whatever new justice is appointed.”
Submit a Letter to the Editor
February 21, 2016