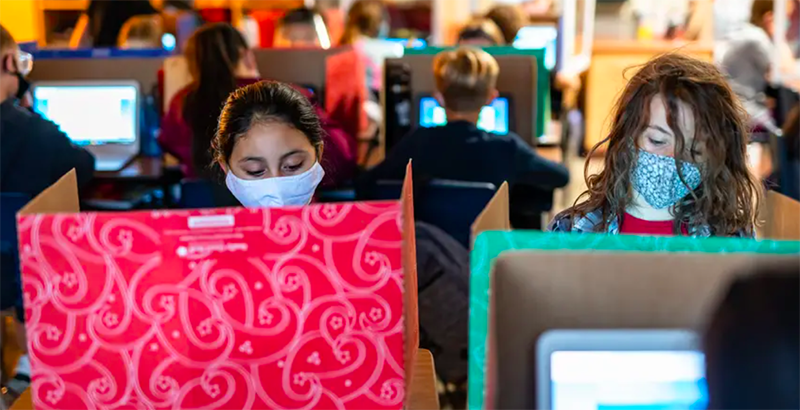 The Texas Supreme Court on Sunday temporarily blocked mask mandates in Dallas and Bexar counties, marking a pivotal moment in the showdown between state and local government as coronavirus cases and hospitalizations surge in Texas.

The ruling comes after several school districts and a handful of counties across the state defied Gov. Greg Abbott’s executive order that restricted local entities from instituting mask mandates. On Friday, the 4th Court of Appeals in San Antonio upheld a lower court ruling that permitted Bexar County to require mask-wearing in public schools. Shortly after, the 5th Court of Appeals in Dallas upheld a more far-reaching order from Dallas County Judge Clay Jenkins that required masks in public schools, universities and businesses.

In a petition for a writ of mandamus to the Texas Supreme Court, Texas Attorney General Ken Paxton’s office said the Texas Disaster Act of 1975 gives the governor power to act as the “commander in chief” of the state’s response to a disaster. Attorneys representing cities and counties that have sued Abbott over his executive order have argued that his orders should not supersede local orders.

“Let this ruling serve as a reminder to all ISDs and Local officials that the Governor’s order stands,” Paxton said in a tweet on Sunday after the ruling.

Abbott’s response to the decision was less pointed, specifying that his executive order does not prohibit mask-wearing.

“Anyone who wants to wear a masks can do so,” Abbott said in a tweet.

But some of the local officials who defied Abbott’s order said they’ll continue to fight.

In a statement, the city of San Antonio said the Supreme Court’s decision “has little practical effect” since a lower court’s ruling granting the city temporary permission to issue a mask mandate will expire tomorrow. The city still plans to present its case in a Bexar County district court.

“The City of San Antonio and Bexar County’s response to the Texas Supreme Court continues to emphasize that the Governor cannot use his emergency powers to suspend laws that provide local entities the needed flexibility to act in an emergency,” said City Attorney Andy Segovia.

Michael Hinojosa, superintendent of the Dallas Independent School District, announced Sunday evening that his district still plans to require masks when the school year begins for a majority of students on Monday, a Dallas ISD spokesperson said. Dallas County has a hearing Aug. 24 before a lower court that granted it permission to implement its mask mandate.

Jenkins, the county judge, said in a Sunday tweet that he expects the county to win in that hearing.

“We won’t stop working with parents, doctors, schools, business [and] others to protect you,” Jenkins said.

Fueled by the highly contagious delta variant, hospitalizations have increased across the state at a pace quicker than at any other point during the pandemic. Less than half of the state’s population is fully vaccinated.

Jon Taylor, a political science professor at the University of Texas at San Antonio, said it was “a long shot” that the state Supreme Court would go against Abbott’s executive order.

“The Supreme Court in general, particularly with a Supreme Court that is 9-0 Republican at the moment, I think it was going to be difficult to see them going against the governor for something that is viewed as his legal right to do at this point,” Taylor said.

Dale Carpenter, a law professor at Southern Methodist University, said the ruling means “the writing is on the wall” for other school districts and counties that have also approved mask requirements, and it’s likely Abbott and Paxton will repeat the same legal maneuvers they made with Dallas and Bexar counties.

Greg Casar, an Austin City Council member, said in a tweet Sunday that a mask requirement for Austin ISD is still in place despite the Supreme Court’s decision.

“This is about keeping our kids in school and out of the hospital,” Casar said.

Meanwhile, President Joe Biden hinted last week at the possibility of the federal government intervening in states that have banned mask mandates.

Recently, the U.S. Centers for Disease Control and Prevention released guidance recommending universal masking for students and school staff. With children younger than 12 not yet cleared to receive the vaccine, some teachers and parents in Texas have expressed worry that not instituting mask requirements could contribute to spread of the virus as the school year gets under way.

That led some of the largest school districts in the state — Austin ISD, Dallas ISD and Houston ISD — to require masks, despite Abbott’s order.

On Friday, a judge granted temporary permission to Harris County and several other Texas school districts to implement masks requirements. A judge in Tarrant County, meanwhile, granted a temporary order preventing Fort Worth ISD from requiring masks after four parents pursued a restraining order against the district, according to the Fort-Worth Star Telegram.

Allyson Waller is a reporter at The Texas Tribune, the only member-supported, digital-first, nonpartisan media organization that informs Texans about public policy, politics, government and statewide issues.

Disclosure: Southern Methodist University and the University of Texas at San Antonio have been financial supporters of The Texas Tribune, funded in part by donations from members, foundations and corporate sponsors. Financial supporters play no role in the Tribune’s journalism. Find a complete list of them here.

74 Interview: Moms for Liberty Co-Founder Tina Descovich on Her Group’s Stunning Growth, Facing Threats Herself as a School Board Member and Googling Koch Brothers