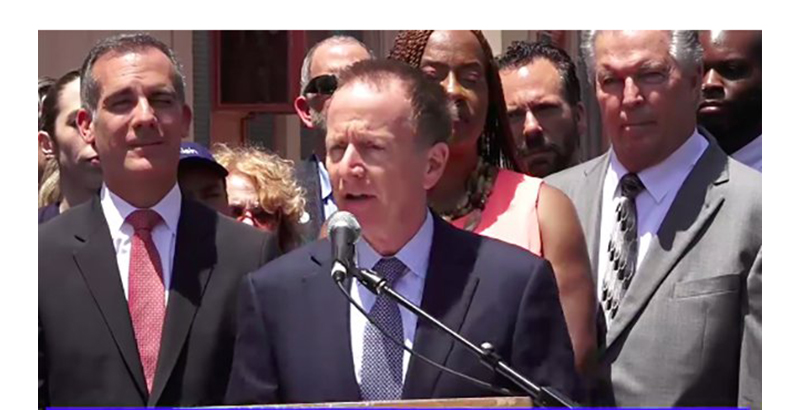 One day after voters overwhelmingly rejected a $500 million-a-year parcel tax, Los Angeles city and school leaders sent a message to voters: We’ve heard your concerns. And we’re going to keep fighting to fund our schools.

“This is just the beginning of our fight,” Superintendent Austin Beutner said as he launched into Wednesday’s news conference. “When I took on this challenge just about a year ago, I knew it would not be easy. Decades of underfunding, strained relationships with those who work in schools, not enough progress in helping all students succeed and a lack of trust by many in the community.

“This can’t be fixed overnight.”

About 54 percent of Los Angeles voters on Tuesday voted “no” on Measure EE, which would have taxed residents within L.A. Unified boundaries 16 cents per square foot of developed property to fund L.A. schools and secure the lower class sizes and additional nurses, counselors and librarians promised in January’s $840 million teacher contract. But the district couldn’t sway opponents who doubted the district’s accountability with new money and demanded reform first.

Beutner said those who fought for the tax are resolved, however, to “get back up and keep moving forward,” with the next step being “to take the fight to Sacramento” and lobby Gov. Gavin Newsom and the state legislature for more funding.

With more than 40 people behind him at the podium, Beutner thanked a slew of colleagues and Measure EE advocates and cheerleaders, including:

● The charter school community “whose schools serve kids and communities with great needs.”

● The business and philanthropic community. “You helped make clear the children in our schools are your employees of the future, and the future of Los Angeles rests in their hands.”

UTLA President Alex Caputo-Pearl — whom Beutner introduced as his “partner in this work,” shaking hands with him at the podium — also acknowledged that the Measure EE campaign faced various roadblocks.

“We knew when we began this that there were aspects that made this an uphill climb,” Caputo-Pearl said. “A tight timeline that we needed to do to try to get resources to our students as quickly as possible. Many of the most affected people — students and undocumented parents — not being able to vote.

“But we did it anyway,” he continued. “And I would do it anyway again.” He echoed Beutner in saying, “We’re ready to keep the fight going. The battle for the soul of L.A. … is just beginning.”

Mayor Eric Garcetti, who played a key role in cementing January’s teacher contract, even went so far as to call the day “historic … a moment in which you see the reflection of the face of our city.”

“On a day which I know we’re supposed to be down, I can’t help but still be extremely hopeful,” Garcetti said. Those who supported Measure EE “collectively believe that education is something we collectively have to own. … [This is] a new chapter of finding what we agree on first instead of what we disagree on first.”

He added: “Absolutely, I’ll leave it up to the analysts, to the political professionals to analyze what happened last night. But I’ll tell you this: This coalition is something I am proud to have been a part of long before January, to have strengthened this year through this measure, and to keep marching forward with together.”

The parcel tax’s downfall sparked a question during the follow-up Q&A as to whether L.A. Unified would be able to submit a budget to the county by the July 1 deadline that fulfills the county’s requirements.

County overseers have threatened a takeover if L.A. Unified can’t prove its solvency over the next three years.

“By law, we have to make sure that we can get through the next three years with the resources that we think we’ll have,” Beutner said. “And we’ll be able to do that.”

I heard from a lot of people who said something like this…. https://t.co/B8Wb4aAZq9

Yesterday's #MeasureEE election result was disappointing, but what's not disappointing is that our community is taking bold steps to build the civic power necessary to create real transformation in South LA.

That's what keeps this movement going and we must continue fighting. pic.twitter.com/hEBIaxld2H

The defeat of #MeasureEE was a huge victory for taxpayers. Jon Coupal will discuss what this victory means today during the 2:00 o’clock hour on the @johnandkenshow https://t.co/4wsYRC7xTk