After Christmas Tornado Hits Texas School, More Than 700 Turn Out to Relocate Classrooms 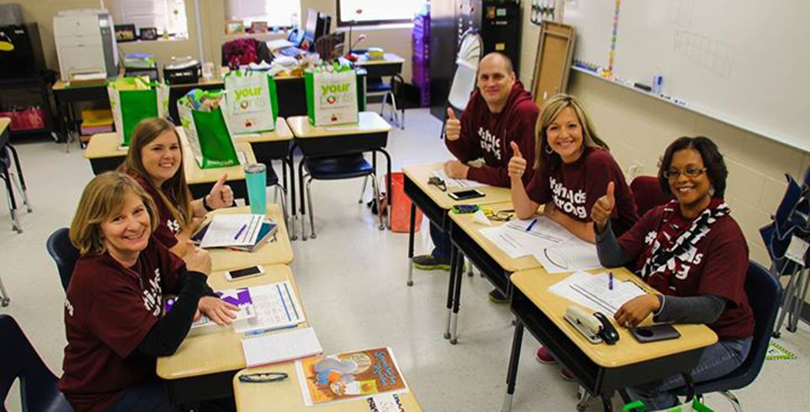 This article is one in a series at The Seventy Four which profiles the heroes, victories, success stories and random acts of kindness to be found at schools all across America. Read more of our recent inspiring coverage at The74million.org/series/inspiring.
The community of Red Oak, Texas has rallied to the aid of Shields Elementary School which was struck and damaged by a tornado on December 26.
Over 700 volunteers turned out to relocate the Shields classrooms for the spring semester, rushing to prep a vacant nearby middle school for the 500 students and 40 teachers ready to begin a new year of learning.
"We're trying to do about a year's worth of work in one week. We're trying to get the classrooms ready," Red Oak ISD spokeswoman Adi Bryant told NBC DFW.

Many local restaurants pitched in to feed the volunteers while they worked, including Motor and Maple Burgers, Amaya’s Mexian Restaurant, Ruthie’s Rolling Cafe and Sonic.

Meanwhile, other volunteers focused on replacing lost text books and school supplies. Citizen National Bank donated gift cards in the amount of $250 to teachers, matching the amount the district had already given to help staff recover from the storm, according to the Daily Light.

Volunteer Jade Clark started an online crowdfunding campaign to fully stock a new school library. As of deadline, $1,060 had been raised towards the $3,000 goal.

Scholastic then jumped in to help, donating $100 to each teacher to buy books at a deep discount, according to a district Facebook post.

Shields Principal Shondra Jones says her teachers have become her key source of strength during this difficult transition.

“When I look at them, I see strength. That’s where I get my strength from because I know they’re looking to me, but I look to them. I don’t know if they realize that, but I get my strength from them,” Jones told the Daily Light.
The community-wide effort was a success and the school hit its deadline, with students heading back to class earlier this week on January 4 — right on schedule.

There was also a special surprising waiting for the kids on their first day. “The thing we kept on hearing, and this surprised us, was that the kids were excited to see their lockers,” Bryant told The Dallas Morning News. “It made them feel like high school kids.”