After Caitlyn Jenner, a Push to Protect Transgender Students in School

This is one in a series of articles surveying the complexities of gender identity, the evolving political debate surrounding the transgender rights of today’s youth, and the ways in which these issues intersect with the policies and practices of K-12 schools across the country. To see the complete series, click here.
Long before Caitlyn Jenner’s cover shoot sparked a broader national discussion about gender, identity and the evolving state of transgender rights, the role of schools in assisting and protecting transgender youth was already emerging as a mainstream news story. For some parents, a Today Show series that aired earlier this year thrust the issues of parenting, teaching and protecting transgender children into a far brighter spotlight.
For many kids and teenagers, the issues of identification, self-expression and bullying arise everyday around school – in classrooms, bathrooms, school buses and playgrounds. The Seventy Four recently published a series of stories that examined the ways in which issues of gender identity and transgender rights intersect with the policies and practices of K-12 schools across the country. The first stories in this ongoing series are collected below (you can also find the latest entries here). We invite you to read the complete archive and, as always, share your views at info@the74million.org. 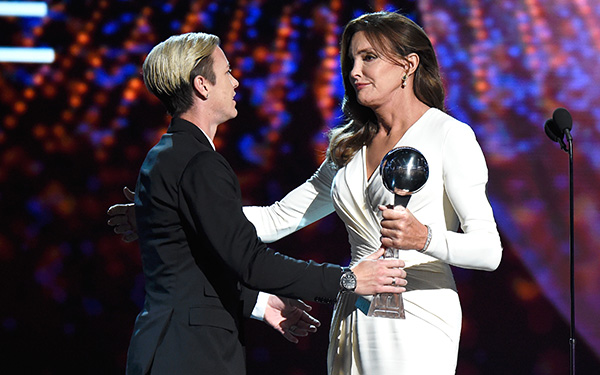 USWNT soccer player Abby Wambach (left) presents Caitlyn Jenner the Arthur Ashe Courage Award onstage during The 2015 ESPYS at Microsoft Theater on July 15, 2015 in Los Angeles, Calif. (Photo by Getty Images)
The Politics: “After Caitlyn Jenner, a New World for Transgender Students – and a New Civil Rights Battleground”
The Seventy Four’s Naomi Nix reported on the ongoing push among LGBT activists to win state-level fights – in both courts and statehouses – to protect transgender students from discrimination. Read the full article here.
Without the possibility of an amendment written into federal education law, LGBT activists’ attention will likely remain focused on state legislatures. 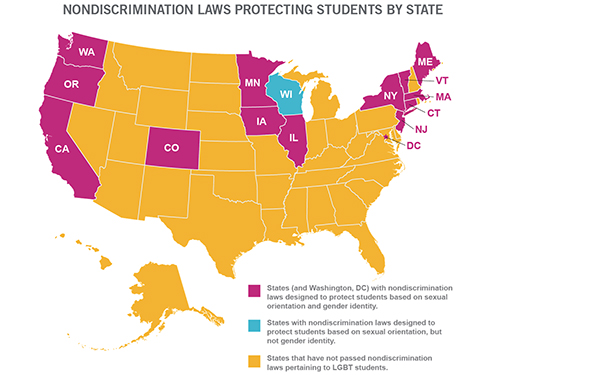 Courtesy of the Gay, Lesbian & Straight Education Network. (Current as of July 24, 2015)
Thirteen states (California, Colorado, Connecticut, Illinois, Iowa, Maine, Massachusetts, Minnesota, New Jersey, New York, Oregon, Vermont and Washington) and the District of Columbia have passed laws banning discrimination against students on the basis of both sexual orientation and gender identity. Wisconsin has passed anti-discrimination legislation that protects students only on the basis of sexual orientation. But 36 states still have yet to address issue, and have not yet passed any nondiscrimination laws that apply specifically to LGBT students. 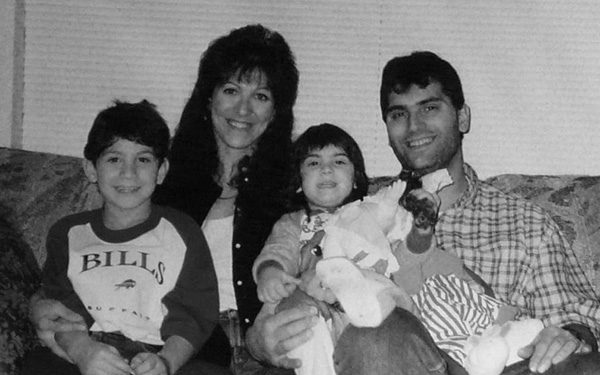 The Cook Family (Courtesy Terri Cook)
The Parents: “My Daughter, My Son – How School Bullies (and State Laws) Changed the Way I Saw My Transgender Child”
Terri Cook is a proud mother of a transgender child who transitioned at the age of 15 (she’s also written about the experience in the book Allies and Angels: A Memoir of our Family’s Transition), and she writes exclusively for The Seventy Four about what she witnessed when her teenager girl started identifying as a teenage boy. Read the full essay here.
I now hold my hand up and profess to the world that I was ignorant. Ignorance is not the same as intolerance. Ignorant is defined as “lacking knowledge, information, or awareness about something in particular.” Many good people simply have not been exposed to information and experiences different from their own. My husband and I had a lot of misconceptions about what it means to be transgender. Having never met or known a transgender person, and having had no reason to learn or understand, we remained ignorant.
The Educator: “One Therapists Mission to Train Schools, Parents and Classmates on Transgender Issues”
The Seventy Four’s Lizzie Thompson interviewed Susan Landon, a licensed marriage and family therapist, who has worked with transgender children and their families in Southern California for years. From individual and family counseling to advising with a transitioning student’s school, she has worked with high-schoolers, grade-schoolers and children who started identifying as young as 18 months. For kids who feel as if they cannot share their true self with the world, she’s their advocate – and their hero. Read our extensive and insightful interview with Landon here.
Middle school can be harder because kids are entering a time of self identifying at that age and are being met with the challenges of puberty. It can be a more difficult period with classmates. When gender nonconforming children are hitting puberty and are not wanting secondary sexual characteristics to develop, they may become very anxious and depressed. They don’t want to develop and there is so much pressure at this age to “fit in”. This is a period of time when I first see a number of kids. Often at this time, medical intervention is a choice the family will make to block physical development, ease the anxiety and depression, and allow the child and family to determine their next steps. A lot of the older kids, kids who are 16, 17, or 18, don’t seem to be having as much trouble as they used to transitioning in school.
The Community: “Why Teachers Should Leave Transgender Specifics to Parents”
Some experts, like Susan Landon above, believe it’s imperative to deal with gender identification issues at younger ages, particularly when it comes to helping kids avoid bullying at schools. But not everyone thinks that issues as complicated as gender identity belong in the grade school environment. In an exclusive essay for The Seventy Four, Dr. Brian Russell makes the case that parents know best, about when their kids are ready to have a deeper conversation about transgenderism. Read the full essay here.
I prefer that schools not presume to know better than individual children's parents when to expose those children's minds to the concept of transgenderism — certainly with any degree of specificity. I encourage educators of preteens to teach their children that it's right to be decent, and wrong to be bullies to anyone. But specific lessons on transgender issues? That’s a parent’s call.
The Classroom: “New York Schools Issued New Transgender Guidelines By State”
The Seventy Four’s Mark Keierleber digs into New York’s guidelines just recently distributed to schools across the state concerning fostering safe and supportive school environments for transgender and gender nonconforming students. It’s a fascinating survey of how schools must find a way to translate state and federal laws and policies into daily classroom procedures. Read Mark’s full report here.
How should teachers refer to a student whose preferred gender differs from that listed on their birth certificate? Which bathroom should a transgender student use? What if they want to compete on a sports team? All these common issues are addressed thoroughly in the new state guidelines, which outline state and federal laws and aid educators in applying those laws at the classroom level. “All students need a safe and supportive school environment to progress academically and developmentally,” says the guidelines. “Administrators, faculty, staff and students each play an important part in creating and sustaining that environment.”
New stories and commentaries in this ongoing series can be found here. We invite you to share your thoughts, opinions and experiences at info@the74million.org.