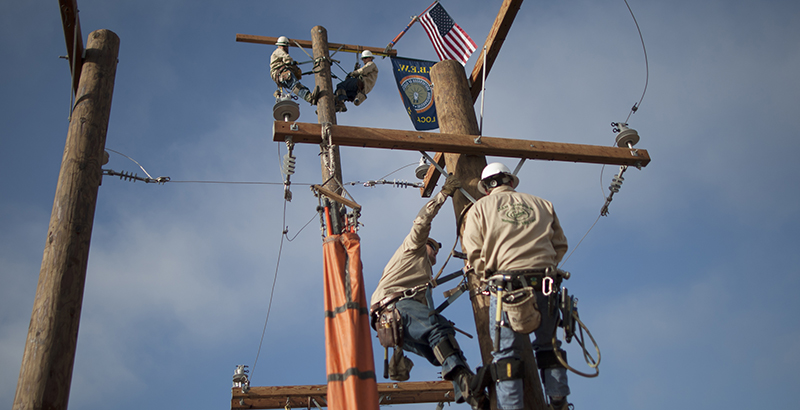 In 2019, apprenticeships were at an all-time high across the country, according to John Ladd, administrator of the federal Office of Apprenticeship. North Carolina saw an impressive increase – jumping from 7,679 in 2018 to 11,204 in 2019. 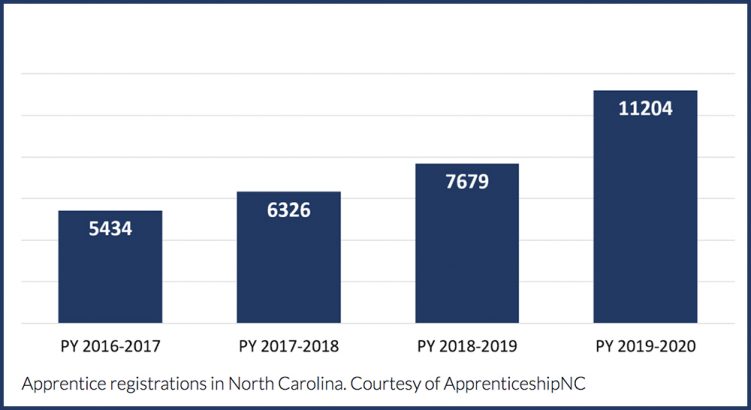 However, like everything else this year, apprenticeships were not immune to the impacts of COVID-19, Ladd said.

“Before, we were able to go into the classroom and do presentations on campus … It’s been a big challenge for us to be innovative … and communicate in a new fashion,” he said.

Nationally, apprenticeship starts were down in 2020 about 20 to 25% from their historic high, Ladd said.

“But, we still saw over 220,000 people start an apprenticeship program last year, which is still significantly above the 10-year average over the past decade,” he said.

This trend holds true for North Carolina. In 2015, the state had roughly 3,800 apprentices and approximately 500 programs.

On April 27-28, over 600 business, community college, and K-12 stakeholders gathered virtually for the annual ApprenticeshipNC conference.

On day one of the virtual conference, a familiar name surfaced – Kevin Robinson, owner and CTO of RTriad Enterprises.

Robinson attended the ApprenticeshipNC conference last year to learn more about starting an apprenticeship program in cybersecurity and DevOps (a combination of software development and IT operations).

After the conference, EdNC caught up with Robinson to talk about his first year and what it was like launching an apprenticeship program during a pandemic.

“It was a bold step towards demonstrating our industry offers an alternative during such times as this – where remote work becomes important,” Robinson said.

He decided the first occupation his company would focus on was cybersecurity. It’s an industry with 0% unemployment and about half a million jobs open in the U.S., he said.

“We’d like to make a dent in that – particularly with Black people and women. We wanted to focus on those two demographics to drive some diversity in that occupation,” said Robinson.

“We just opened the gate and said ‘Hey, we are running an apprenticeship program and here’s where you sign up,’” he said.

Robinson and his team are all about redefining what it means to be an expert. Employers will sometimes post that they are looking to hire someone with 10 years of experience and a deep knowledge of critical infrastructure and cybersecurity controls. “But . . . the stuff they are talking about, it’s only been out for a year. So, we’ve redefined an expert,” he explained.

You don’t need 10 years of experience, but you need to be able to learn quickly and apply what you learn, Robinson said.

And that’s one reason RTriad started an apprenticeship program – to be help shift that mindset.

The other reason was to help people realize their own dreams.

“What’s important to me is that people are getting to do the work that they think is meaningful,” Robinson said. “Getting the opportunity to change their career and experience the kind of benefits I’ve had for a multi-decade career in IT.”

“We really focus in on certifications,” he said. “That’s been a key point that resonates with the folks trying to get into the industry.”

For over 10 years, our country and state have experienced continuous economic growth. That quickly came to an end with the virus, said Michael Walden, extension economist at North Carolina State University.

A year ago, the country lost 20 million jobs in one month, Walden said. North Carolina lost 600,000.

“That’s unheard of,” Walden said. “Nothing like that even happened during the Great Depression of the 1930s.”

Since then, both the country and North Carolina have seen improvements. But not across all sectors. 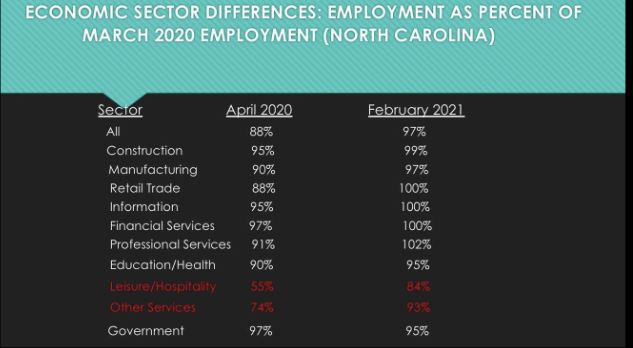 Walden’s presentation during ApprenticeshipNC 2021 conference.
This slide shows economic sector changes in employment year over year in N.C. *February 2021 should be labeled March 2021.

As of March 2021, North Carolina has 97% of the jobs they had pre-pandemic. Some sectors have made a full recovery.

The bounce back to pre-pandemic unemployment rates isn’t going to be quick, Walden said.

“One of the reasons why we are not going to see a rapid return to pre-pandemic unemployment rates is because this pandemic is going to have a major impact on the job market in several ways,” he said. 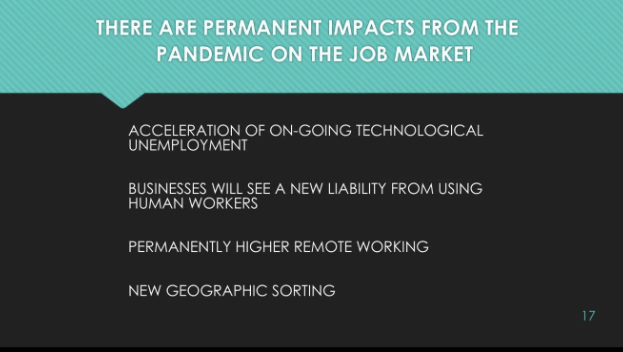 Why is this important for apprenticeship programs?

“This means that there’s going to be a new need to retrain people in jobs,” Walden said. “What you are doing is going to be absolutely crucial. I can’t think of anything perhaps more crucial than being on top of this with retraining.”

In his address to attendees, Ladd pointed out how apprenticeship is a major priority for Biden’s administration. The administration is proposing a $100 million increase in funding for registered apprenticeships. This is the largest increase that’s been proposed – bringing the total to $285 million.

Congress is also moving the needle on apprenticeship. Ladd explained that it’s possible we could see the National Apprenticeship Act reauthorized. The act, which was first passed by Congress in 1937, has not been reauthorized in 80 years. If passed, the bill would promote greater diversity in apprenticeships and boost women’s participation, which right now is only at 10%.

Several apprenticeship partners have already begun to focus their efforts on diversity, equity, and inclusion.

Cynthia Bailey, senior HR consultant with Atrium Health, said their apprenticeship program has increased the diversity of their workforce.

“Our mission is to improve health, elevate hope, and advance healing for all,” she said. “We serve all kinds of individuals, and so I would also want our healthcare providers to reflect that as well. The apprenticeship program has allowed us to give individuals an opportunity to advance in roles where they may not have had otherwise.”

Holmes said his team makes a point to specifically address young women in STEM. They also introduce occupations and apprenticeships to more diverse and younger audiences.

“We start early. We go to every single high school and middle school,” said Holmes. “We recently did an event for Latino families where all of our material is translated into Spanish.”

Additionally, his team speaks to mentorship programs, hoping to create awareness for students who may not have access to some of the apprenticeship programs available to them.

Like Holmes, Robinson and his team are creating awareness.

“I’ve used a lot of my personal network … so that people can understand that they can do it, too. It’s really important that folks see other people that look like them,” he said.

As apprenticeships continue to grow across the country and state, the focus on equity, diversity, and inclusion will need to grow as well, Ladd said.