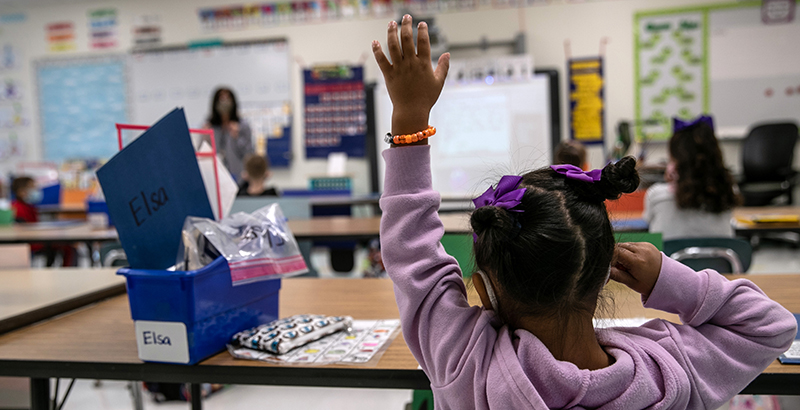 When tiny Mustard Seed Academy reported its first case of COVID-19 this summer, its leaders did what they were supposed to do: The infected teacher was told to stay home.

Mustard Seed also reported the case to San Antonio’s Metropolitan Health District, and as per instructions, the preschool didn’t reach out to any other families with children in the infected teacher’s class. The health district would do contact tracing, school officials were told.

But the health district’s directives fell short. A month later, as cases spread throughout the school and five teachers and seven students were infected with COVID-19, Mustard Seed officials had to take more drastic measures: The preschool shut down for two weeks.

Mustard Seed is a small school with a maximum enrollment of 84 students — but what happened there is a cautionary tale for San Antonio Independent School District and its much larger schools facing the inevitable COVID-19 outbreak.

Local epidemiologists, teachers and principals are warning that SAISD’s plan to handle COVID-19 outbreaks is not nearly aggressive enough and could mean infections on a much larger scale. A shortage of contact tracers and a lack of district guidance, coupled with overly vague recommendations, are leaving schools vulnerable to the potentially massive increase in congregate setting cases brought on by school reopenings.

“I’m not comfortable with the guidance from Metro Health,” said Rachell Tucker, an SAISD teacher and a member of a citywide alliance of teachers and staff organizing for more cautious school reopening and safety plans. “The district does not have ready-to-go trained contact tracers, and there are a plethora of scenarios that haven’t been thought about.”

Tucker was particularly critical of practices that leave individual principals and school staff to decide how to handle the pandemic and what information to provide to teachers, staff and parents.

Current guidance by Metro Health states that cases should be reported to the health authority, which would, ostensibly, then conduct contact tracing and advise those exposed as to whether they should self-isolate and get tested.

But there have been ongoing delays and backlogs in Metro Health’s contact tracing, largely due to understaffing. At the height of the summer outbreak, contact tracers were more than two weeks behind. Additional contact tracers are currently being hired at Metro Health, officials said. SAISD officials confirmed that Human Resources and Student Health Services would be assisting with data collection for students, teachers and staff. The district has hired three additional staff to help with contact tracing at district level.

Local epidemiologists say those protocols are not robust enough, and they are advising schools to take a more aggressive approach to notifying parents, monitoring probable cases and conducting contact tracing. Some private and charter schools, they say, are doing so.

Whom and when to notify?

When any child is sick, SAISD will contact the family to find out if the child has been exposed to COVID-19, and will then follow up to find out if symptoms are worsening. Once a case is confirmed with a lab test, the district is instructed to report the case to Metro Health and begin gathering contact data from the school.

San Antonio epidemiologist Cherise Rohr-Allegrini, who has advised local private schools on how to handle prevention and management of COVID-19 outbreaks, recommends a similar initial investigation to her clients, she said, but, unlike SAISD, she does not wait for the widely used PCR-confirmed positive lab report, which can take weeks, before she starts making phone calls to parents. She instead tells them to get a Rapid Antigen test, which can be ready in as little as 20 minutes.

By the time the case is confirmed by PCR, she said, transmission could have progressed exponentially.

Once a student meets the criteria for a “probable” case — meaning that either the student has a positive rapid test, has definitely been exposed to COVID-19 or has symptoms — Rohr-Allegrini advises identifying and notifying the student’s close contacts.

Her definition of “close contact” includes more people than the one being used by SAISD.

Officials with SAISD said the criteria for close contact will be those who have been within six feet for over 15 minutes, and they would ask further questions about masks and symptoms to determine whether a person was exposed.

Rohr-Allegrini uses a broader definition of “close contact,” she said. “If it’s an indoor space, I would expand that dramatically.”

Those who spend the day at the desks closest to the infected student or teacher should be considered “close contact” whether or not they are wearing masks, Rohr-Allegrini said. Given what is now known about how droplets move through the air, with prolonged exposure, masks cannot be 100 percent effective.

“It’s still a small risk, but it’s there,” Rohr-Allegrini said.

To her clients, she recommends a lengthy investigative phone call to the entire class both to gather and to share information about the level of risk their child had of exposure. Current SAISD guidelines do not require the entire class to receive such phone calls, only those students who had “close contact” with the infected student, according to their narrower definition.

Rohr-Allegrini insisted that for case investigation to work, it has to be done immediately and meticulously.

“These calls actually should take a long time,” she said. To do it right will require more manpower.

Right now, SAISD and Metro Health do not have the staffing levels Rohr-Allegrini recommended to efficiently trace the web of contacts in schools, which are considered congregate settings.

When a student or teacher gets sick, Rohr-Allegrini said, school officials are racing against the clock. News travels fast. Kids will tell parents who stayed home sick. Rumors will spread. “They need to deal with it that day,” Rohr-Allegrini said, in order to keep the community’s trust. Delays due to backups at the district or Metro Health will use up valuable time.

Although San Antonio ISD might not be adopting the same extensive protocols she recommends, Rohr-Allegrini’s kids will remain enrolled there. She trusts Bonham Academy Principal David Nungaray, who is also a member of the district’s school reopening task force.

Rohr-Allegrini said she has full faith that Nungaray has the reputation and connection to the Bonham community that makes for good communication during a pandemic. Teachers and parents trust him, she said: “He is deeply involved.”

He cannot, however, handle a full-scale contact tracing operation on his own, she said. Nor does every campus have an epidemiologist parent on hand to troubleshoot or a principal who sat on the reopening task force. If districts want to get back to school and stay there, she said, they need to be prepared to dramatically increase their contact tracing staff and use the most aggressive measures possible.

“I understand the need to get kids back in the classroom,” Rohr-Allegrini said, but rushing will in all likelihood end in an outbreak. “Then what’s going to happen? We’re going to have to close the schools again.”

Correction: An earlier version of this article stated that the first identified COVID-19 case at Mustard Seed Academy was a student. Officials later confirmed it was a teacher.

New Data Suggest Pandemic May Not Just Be Leaving Low-Income Students Behind; It May Be Propelling Wealthier Ones Even Further Ahead