A Texas Student Was Hospitalized for Leukemia. Her Classmates Gathered Up 1,500 Toys for Sick Children on the Ward 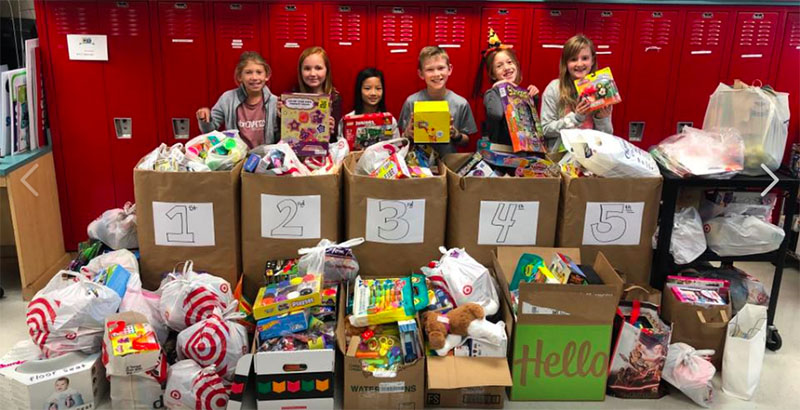 In some schools, having a robot in class might create a major distraction. But at Castle Hills Elementary in Lewisville, Texas, students treat the robot like just another one of the kids.

It was the chance to help some very sick children that got those fourth-graders hopping.

Thank you to @NBCDFW's @DeborahNBC5 for visiting us to cover a special story about #teambrAvery💖 and the incredible kindness shown by our entire fourth grade class! Stay tuned for the air date/time. #chedragonpride #lisdbekind @LewisvilleISD pic.twitter.com/WEuRMrLoz7

After Castle Hills student Avery Pacheco was hospitalized with leukemia over the summer, she started going to class via robot, using technology that helps chronically ill students all around the world attend school. The robot acts as a two-way mirror — when Avery is well enough, she and the robot participate in lessons and attend school events. But it also lets the healthy children in class watch daily life inside a pediatric hospital ward.

“Avery was diagnosed with leukemia at the end of August,” her mother, Emily Pacheco, told NBC Dallas-Fort Worth. “It was kind of a shock. She went from being a normal, healthy 9-year-old to being sick quickly.”

Once they witnessed Avery’s struggles, her classmates decided to hold a toy drive to benefit the hospital where she was receiving treatment, Children’s Medical Center Dallas.

By Oct. 22, the last day of the drive, the students had collected 1,500 toys for the hospital’s prize closet, NBC reported. As they looked over piles of toys in the school gym, excited and noisy fourth-graders packed boxes with card games, LEGO sets, Hot Wheels, Play-Doh and more.

I would say we had an awesome turnout for this challenge (1,500 TOYS donated)!! Our school rocks!!! 💛💙💛Mrs Clark will be announcing at the Red Ribbon Assembly on Tuesday to the class that wins extra recess!

We have an awesome God & we ask you to join our gym family in lifting Avery Brooke Pacheco, her family, & medical team treating her in prayer. She was diagnosed with Leukemia on Sat and starts chemo tomorrow. We thank you giving her an XTREME group of prayer warriors!#brAVERY pic.twitter.com/psjfJsDI8C

Via robot, Avery looks around the gym as the toy pack-up takes place in the NBC video. She and her mother, both wearing pink “Team BrAvery” T-shirts that have become standard wear for those in CHE, as Castle Hills Elementary is known, sit close together. Then, in a sweet, little girl’s voice, Avery shyly thanks her classmates for their generosity and support.