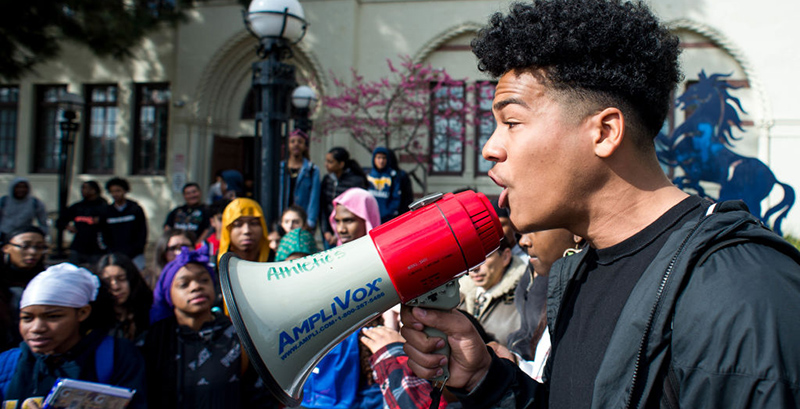 This essay is adapted from posts that originally appeared on the New York School Talk blog.

Every adult in a school building gets a union. In New York City, most are members of the United Federation of Teachers, and together they are incredibly powerful and effective. They negotiate all the rules. They can influence hiring and firing procedures, and everything about teaching. They have negotiated an incredible list of policies and rights for their members, including limits on class sizes, limits on their workload, limits on the lengths of school days and academic years, and many other policies that should have been decided, at least in part, by the students most affected by those policies.

Imagine if students could negotiate their class sizes, workloads and class-time limits. If we organized, we could take control of our educations and our schools, but that’s not all. Students have a fundamentally different kind of power and leverage than teachers or other school staff, so we shouldn’t limit ourselves just to collective bargaining like any typical labor union.

If the students of NYC organized, we could help each other in ways that the city Department of Education doesn’t. Instead of trying to compel the DOE to help us and hoping they yield to our demands, we could help each other directly and without DOE approval, which could be revoked at any time without any student input. Doing this would make this organization more of a syndicate than a union, which I think is a better term for what I envision.

If we, as students, formed a syndicate, what services could we provide to one another? Among others, this syndicate could organize sharing of resources among students of all schools and homeschools, making education more accessible to everyone. Some of these resource-sharing projects could be:

Students could record lessons by their favorite teachers and share them with all students for free. Ideally, this could be done for all teachers at all schools, so all students could have the opportunity to learn from as wide a variety of teachers as possible. This would allow the best teachers to have the widest influence, an influence determined not by administrators of the DOE, but by the students who benefit from the education.

A lesson library could also help students at a particular school make better choices about which teacher’s classes they should take, and it could help them better prepare themselves for class, should they desire it.

The syndicate could organize and make available a comprehensive archive of the assignments students are given, the responses they gave and the grades they received. This well-organized archive would be an invaluable resource for many reasons.

First, having easy access to others’ work can help students understand what the standards and expectations really are, especially if a teacher expresses those expectations poorly. This archive would remove the mystery of how grades are given and how standards are applied.

Second, grade transparency is critical to ensuring that students are treated fairly. This archive could help reveal preferential or discriminatory treatment on the level of individual teachers, or even entire schools. Although employers and teachers have made it taboo to talk about money or grades, we must do so if we are to hold teachers and schools accountable for unfair treatment of students.

Any potential danger of plagiarism is irrelevant. It is likely that students would use the assignment archive to measure their own work against that of others, so they could improve their own work to meet standards they would be better able to understand. It would make teachers’ jobs easier because students would have effectively already had one or more rounds of feedback before submitting an assignment. This archive would also make it even easier to catch and avoid plagiarism by making any assignment easy to cross-reference across all similar assignments. Helping students to improve their work and helping teachers to catch plagiarism would be a mutually beneficial arrangement.

Both the recorded lesson library and the assignment archive would help students make more informed decisions about which classes to take and with which teachers. This would give teachers a higher proportion of students who had made the informed decision to be in their class, and it would give students’ a better idea of what they were getting into and help them prepare accordingly.

Physical and digital textbook libraries/exchanges could be easily maintained by a student syndicate. Many schools use the same textbooks, and most widely used textbooks have ebook or pdf versions that could be made accessible to all students online, regardless of the school they attend. It could even give access to students whose classes might not require a certain textbook, but who would benefit from having access to one regardless.

The syndicate could also make digital copies of physical textbooks. Scanning every page of a textbook is an immense task for one person to take on alone, but if divided over 100 or so students, it becomes much easier. Once digitized, these textbooks could be distributed freely to all students so they could be accessible anywhere at any time. The same could be done for test prep books, before anybody writes in them. Nobody would have to worry about forgetting their textbook at school while doing homework or at home while doing schoolwork.

The syndicate could also organize interschool textbook exchanges and repositories to ensure that everybody has access to physical textbooks when they need them. If a particular school library lacks the necessary resources, the syndicate could help organize textbook sharing within a school and pool resources from other schools. This would even make purchasing textbooks more efficient, as a single textbook, purchased by the syndicate and shared, could benefit many more students than just one student buying one textbook.

Certain schools keep lists of credentials for accessing online databases, libraries, news sites, test prep sites, textbook supplements, etc. Students could share both school and personal credentials to all these sites. The DOE already makes many research and library sites accessible to public school students, but the syndicate could expand access to homeschooled students and anybody else who wants to learn. Some schools have their own access to certain resources, and this could be shared more widely to benefit more students. A student syndicate could make and distribute an app allowing students from anywhere to redirect traffic through students’ devices in schools that have special access, so that every student could get any information they need, no matter where they are or what school they are physically in.

Especially now, with distance learning, students need devices and internet access. Device borrowing — or, ideally, giving — could be organized between schools when one school simply doesn’t have enough devices for all its students.

For internet access, students who don’t have access to Wi-Fi could be given the option to attend school at the home of a student nearby whose family has already been vaccinated or is at low risk for serious adverse symptoms or continued spread of COVID-19. This could also help students whose parents can’t supervise them at home by taking the responsibility of finding somewhere for students to learn off of parents and putting it onto students who are helped by syndicate organizers. Parents would only have to vet to their own satisfaction the family at whose home their child would be attending school.

All these suggestions could help students, and we, as students, could implement these programs if we organize.