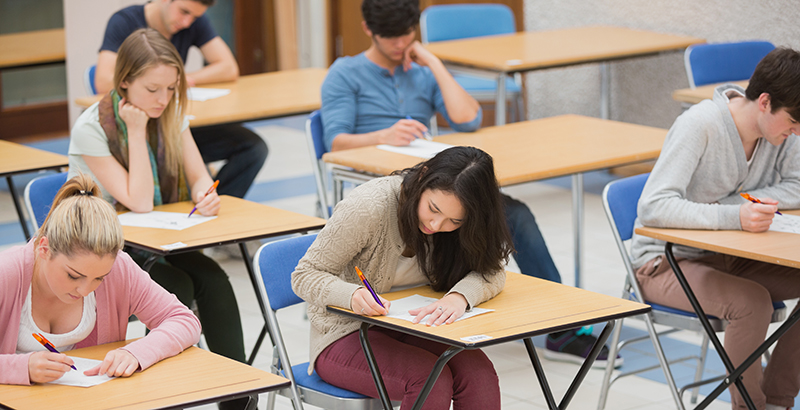 Advocates of requiring SAT or ACT for college applications revere these tests as an admissions factor that only strongly favors wealthier students instead of overwhelmingly favoring wealthy students.

They don’t seem to realize that it’s college admissions officers who intentionally and systematically do the favoring. These are the people who decide what characteristics to favor in college admissions, so they are also the ones who must design a fairer application evaluation process, which will be easier to do when SAT scores are ignored.

Treating standardized tests as a step up in fairness from other “soft factors” is exactly what college admissions officers want you to do. It makes their jobs easier and prevents them from ever having to seriously re-evaluate their applicant evaluation and admissions methods.

One of the most compelling arguments against colleges going test-optional is summarized in the subtitle of this USA Today article, “Eliminating meritocratic opportunities for students to excel will cause colleges to rely on the ‘soft’ parts of a résumé, which will benefit the rich.” But that claim serves only to inoculate colleges against any accusations of discrimination, and relies on some demonstrably false premises.

Firstly, the SAT is not meritocratic. Its grading method is somewhat opaque, and the test itself favors wealthier students who can afford extra prep and retakes. Wealthier families also have an easier time getting accommodations for students who need them, doubly disadvantaging poorer students who might also need such accommodations. All of these problems with the SAT are structural or integral to the nature of the test.

Secondly, in college admissions, nothing “benefits” any particular set of students. College admissions officers may choose to favor certain groups based on certain characteristics, but it is always a conscious, intentional choice. It’s their job to weigh the candidates against one another, and it’s their job to make and calibrate the scales.

In fact, top universities require good grades and high SAT scores as a baseline and already make almost all of their decisions based on other factors in order to differentiate among their many, many qualified applicants.

The ways they weigh students depend on far less intrinsic discrimination than SAT scores. Admissions officers could just as easily decide that being a leader of a club will act as a penalty rather than a plus in the admission evaluation. They could choose to favor essays that students actually wrote themselves. (They can tell when students had someone else write their essays.) They could choose to ignore a student’s legacy status or demonstrated interest, or even penalize for it.

Imagine that a college wanted to favor men over women in its admissions process. It might make its evaluation process such that being a man counts for significantly more than being a woman, but such discrimination would be too easy to identify and fix. So, instead, it might choose to weigh students’ height as an important factor in admissions. Certain women can be and often are taller than certain men, just as certain poor students may earn higher SAT scores than wealthy ones. But the criterion is inherently biased. The only way to justify using something like height or SAT scores would be to prove that it has a significant, practical impact on a student’s ability to succeed in college and that fairer criteria cannot be used for the same purpose.

Using the SAT allows college admissions officers to deflect accusations of discrimination. It’s easy for them to argue, “Well, his SAT score was higher,” when what they mean is, “His parents can pay full and still donate $20 million a year.”

If colleges couldn’t use the SAT, however, and had to rely more on “soft factors,” but still wanted to favor wealthy students, they would have to argue something like, “A student who volunteers at an animal shelter will make a better college student than a student who had to spend all their free time taking care of their younger siblings so their parents could work,” or, “This student receiving a recommendation from his state senator is clearly better qualified for our university than this other student who only got recommendations from his teachers.” These are much less convincing arguments, and they make the exact basis of the discrimination in any decision obvious enough to undo.

Using the SAT as the standard of fairness by which other factors are measured bakes its flaws into the entire system, preventing true fairness from being created. Explicit, intentional discrimination is far easier to correct than discrimination disguised as objectivity.