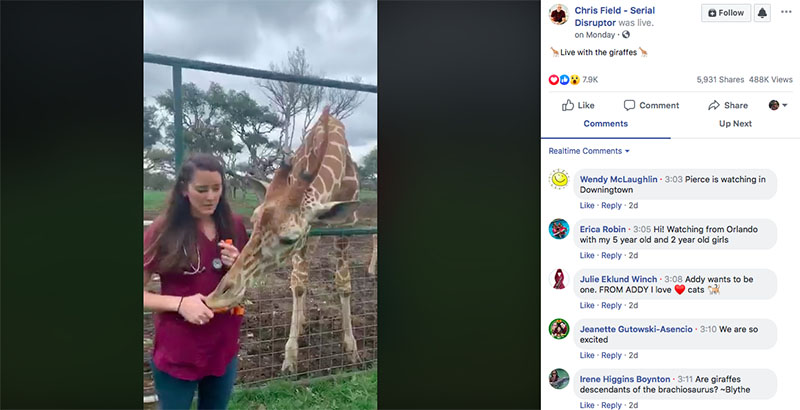 At first glance, today is a day like any other for exotic-animals veterinarian Brittni East. She’s feeding carrots, crackers and lettuce to three giraffes, each of whom has a distinct name and age and interest in today’s menu. Three-year-old Bubba munches happily on carrots. Petals, who just had a baby, prefers lettuce. Lethargic, 8-year-old Puzzles changes his preference on a whim.

East knows these animals well; she does routine care for them here at this ranch in Mountain Home, Texas, which is run by a San Antonio-based conservation group called Wildlife Partners. A light wind sweeps the oaks huddled on the horizon behind her. Storm clouds gather overhead.

In one important way, though, today couldn’t be more different than East’s regular routine. Like most people, she doesn’t usually address an audience of thousands of kids, scattered throughout living rooms around the country in homes as far-flung as North Carolina and New Jersey, Louisiana and St. Louis.

East’s husband, who’s recording her on his phone, refocuses it to capture her handing Bubba another carrot. The giraffe takes it and promptly drools on her head. The number of current viewers is about 12,500; a handful are even tuning in from overseas. 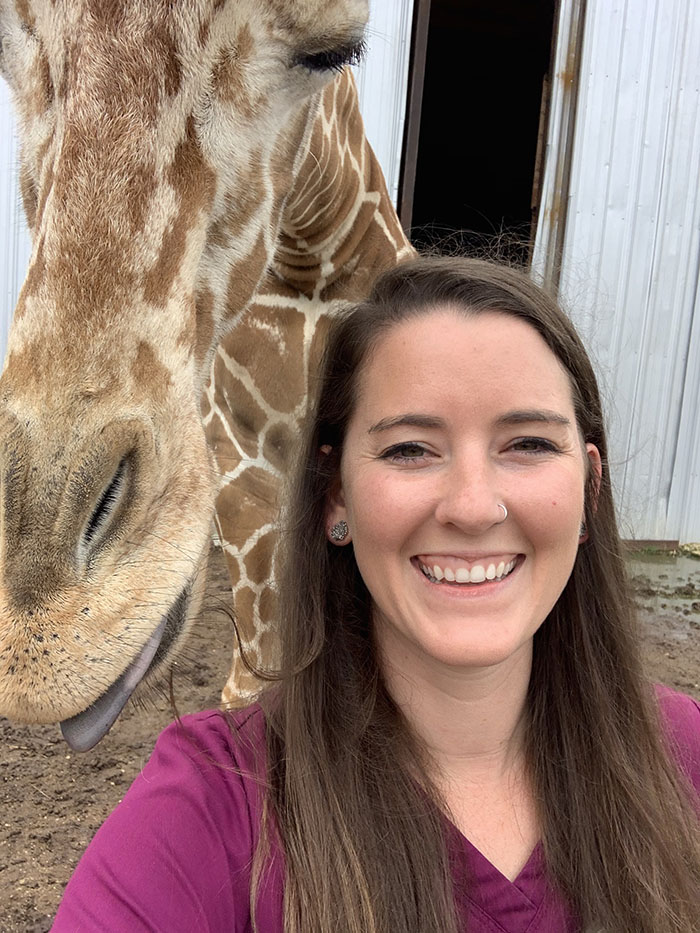 Brittni East takes a selfie as she talks to children across the country about her job caring for giraffes and other exotic animals. (Brittni East)

East won’t learn that number until after the webinar wraps. For now, she laughs easily and recovers. “OK, kids,” she says. “Who can guess how much a giraffe’s heart weighs?”

It’s a Monday in mid-March, 2020, the first day in a long week for parents living through the coronavirus pandemic, a time when more than half of the nation’s kids have been sent home from school — either for a couple of weeks or until the school year ends, however long it takes communities around the country to “flatten the curve.”

As the virus began ravaging the nation in earnest last week, Chris Field, a Texan father of four who has started his own nonprofit, decided to call up some old friends and ask them to give lectures about their careers to kids sitting at home. He drafted a schedule — webinars are streaming every weekday at 2 p.m. CST — and posted it last Saturday on his Facebook page.

“I was expecting about 300 families,” he said. Instead, he heard from tens of thousands.

East was one of the first friends he called. For the coming weeks, and possibly longer, Field will stream the webinar “adventures” on his page for free over Facebook Live. The enterprise is one of the many grassroots efforts to educate young kids that have surfaced online since the coronavirus took hold. Celebrities are reading kids stories, websites are crowdsourcing math curricula, and parent bloggers are circulating lists of companies offering their lesson plans for free.

In a surreal new era, Field’s project marks a strange return to an old form of entertainment as education: live televised events for kids.

On Tuesday, the day after East presented, two police officers gave kids a tour of their cop car. On Wednesday, a yoga instructor led a stretching session for children. Thursday, Field read his audience a children’s book, and Friday, he broadcasted an online art class.

Field is a self-proclaimed “social disrupter” whose wife used to be a public school teacher with Bryan Independent School District near their home an hour north of Houston. Prior to the coronavirus outbreak, he found success reaching audiences on Facebook, both for his nonprofit, which helps victims of human trafficking, and in a recreational sense. One of his 2017 posts — about the “life-changing” nature of iconic Texan ice cream brand Blue Bell’s Christmas cookie flavor — was once shared tens of thousands of times. Two years ago, he wrote a book called Disrupting for Good, about “being the kind of person who sees something that needs to be done and doing something about it.”

Elementary school social worker Staci Higgins Hurley was grateful this time around that Field did. Like thousands of other parents around the country, she was seeking ways to keep her young children entertained during the day when she saw his post in her newsfeed. Hurley lives in Saginaw, Michigan; her kids, Addison and Avery, are 8 and 5. On March 13, before the sun came up, she learned that the kids’ school would be closed until April 6. Because of the last-minute nature of the closure, teachers there weren’t able to pull materials and send families work packets.

“Both of my kids are big into animals and want to be veterinarians,” Hurley said in an interview. “And [the webinars] were something educational that you could put on to give yourself time to work.”

Addison Hurley sits in her family’s living room watching East feed giraffes on the TV, which her mom has connected to her phone.

“Who can guess how much a giraffe’s heart weighs?”

“25,” East corrects her, before inviting the second-grader and her peers to weigh themselves and figure out how many giraffe hearts equal their mass. Addison, who did a research project on the animal last year but is still learning things she hasn’t heard before, scampers off to comply. 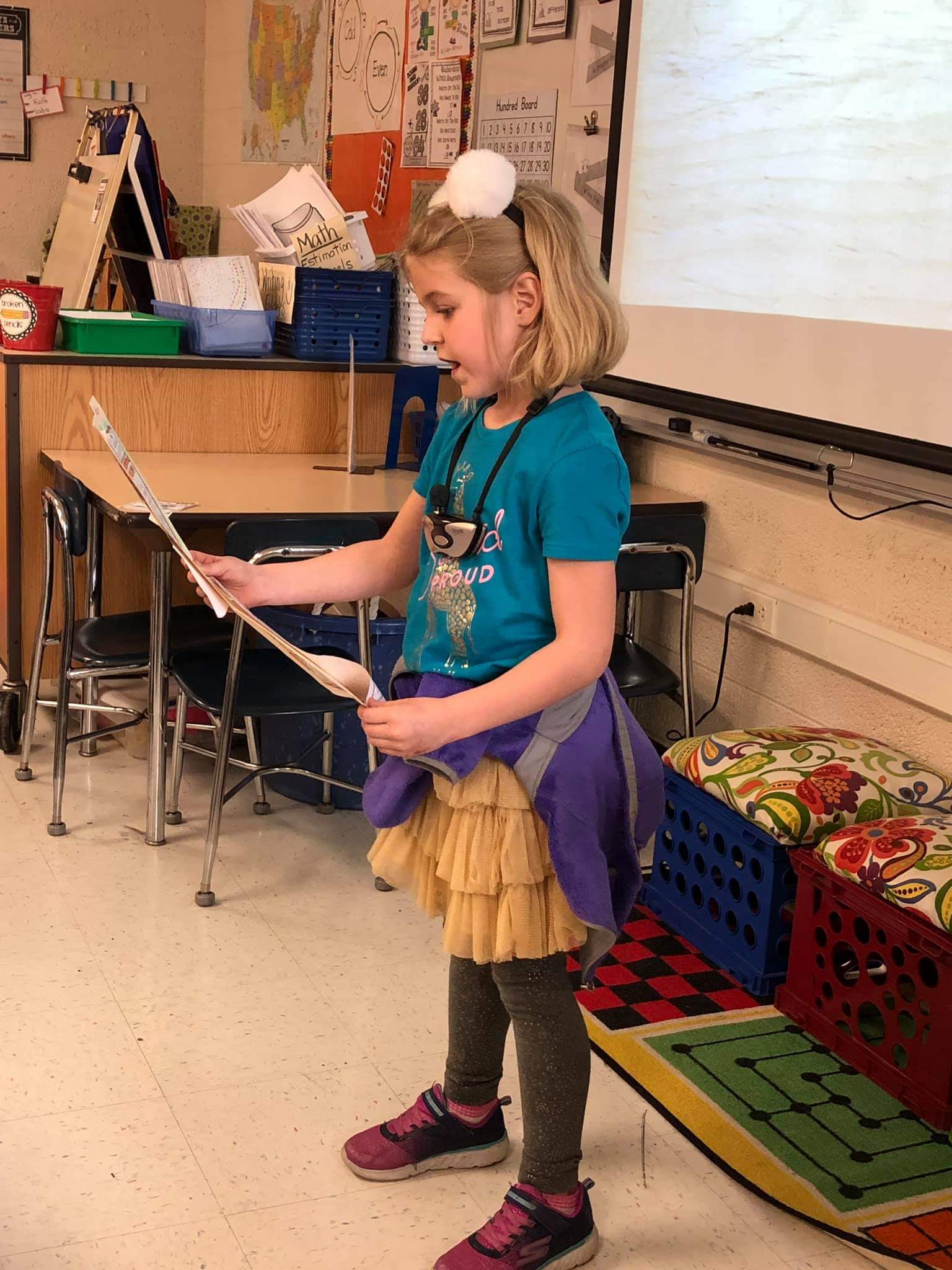 Hurley says her family will definitely tune in for the rest of the webinars. What’s next on the docket? Field says he won’t stop hosting the videos until the coronavirus lets up. He already has the tentative lineup for this coming week: an Air Force pilot, a beekeeper, a firefighter, a retired NFL player and a farmer.

“Keeping people at home so that we don’t harm our most vulnerable population is the priority,” he said. “I have three living grandparents in their 80s. There’s a lot of reasons to heed the warnings. I hope this helps other families do the same.”