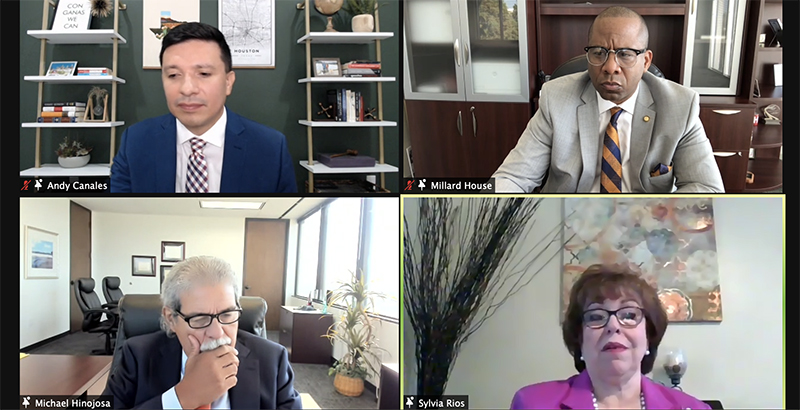 As the nation’s Latino student population continues to grow, a nonprofit advocacy group this week called for a commitment to increasing the numbers of Latino teachers and administrators in the nation’s schools and removing the barriers that keep prospective educators from pursuing college degrees.

“We need a seat at the table to get into the room where decisions are being made,” Amanda Fernandez, president and CEO of Latinos for Education, said at the organization’s first national summit, held Wednesday and Thursday.

Including Dallas Independent School District Superintendent Michael Hinojosa and Rhode Island Commissioner of Education Angelica Infante-Green, the event was a chance to feature leaders “who showed up for Latinos during the COVID-19 pandemic,” said Feliza Ortiz-Licon, the group’s chief policy and advocacy officer. “We want people to see that we are not alone in our fight for educational equity.”

The virtual conversations, including regional events in Massachusetts and Texas, focused on the barriers that families face in accessing quality education opportunities for their children as well as the contributions Latino educators make in their school communities.

“Teachers want to work in a place where their voice is valued,” said Infante-Green, noting her state’s efforts to pay signing bonuses to bilingual teachers and to place them in schools together so they don’t feel isolated.

The State of Latino Education event comes after a period in which Latinos “didn’t have a voice or representation at the federal level,” Fernandez said, referring to the Trump administration. In addition, the pandemic has disproportionately impacted the Latino community and pulled back “this rug where we used to sweep all the inequities,” Infante-Green added. Along with the national and state-level summits, the organization released a report outlining multiple obstacles facing Latino students from early childhood through the post-secondary years. The findings, based on results from focus groups, point to poor access to quality early learning for young children, limited college advising and support services for high school students and what Ortiz-Licon called the “chronic underrepresentation of Latino educators.”

More than a quarter of the nation’s public school students are Latino, but Latino teachers make up less than 10 percent of the educator workforce, according to data cited in the report. The same is true for administrators. Roughly half of the focus group participants were Latino teachers, who said they face racism and are often placed in high-needs schools without adequate support. Many are also called upon to provide translation services.

“They are not compensated, not even acknowledged for all the roles they play,” Ortiz-Licon said.

Hinojosa spoke of his district’s efforts to recruit excellent teachers and principals and pay them well — an initiative the community has supported through tax increases. In a district where 48 percent of students are English learners, Latino students are not really a “subgroup,” he said.

“If we don’t do well with this population we’re not doing well at all,” he said, highlighting initiatives such as business-industry partnerships allowing students to earn associate degrees along with their high school diplomas. “We just need the community to believe in us.”

Others emphasized the value of programs that make students feel connected to school, such as clubs and cultural events, as well as nonacademic services to address hunger, housing and mental health. The Houston Independent School District is using federal relief funds to staff schools with resource specialists.

“It’s not just about the student; it’s about being able to support our families as well,” said Superintendent Millard House.

Latino families with young children, the organization’s report said, often don’t understand the difference between child care and early education or the benefits for children. While pre-K and kindergarten enrollment has declined overall during the pandemic, the authors note that it has declined particularly among Black and Latino children and by more than half among those from low-income families.

But Miriam Calderon, who leads early childhood work at the U.S. Department of Education, pointed to President Joe Biden’s child care and universal pre-K proposals, which include pay increases for teachers, as a move toward treating education for young children as a “public good.”

“The failure to see early-childhood education as essential is shifting,” she said. “That makes me hopeful.”