A San Francisco School Board Election Is Giving Non-Citizens a Vote — a First in California. But Here’s Why Many Are Staying Away 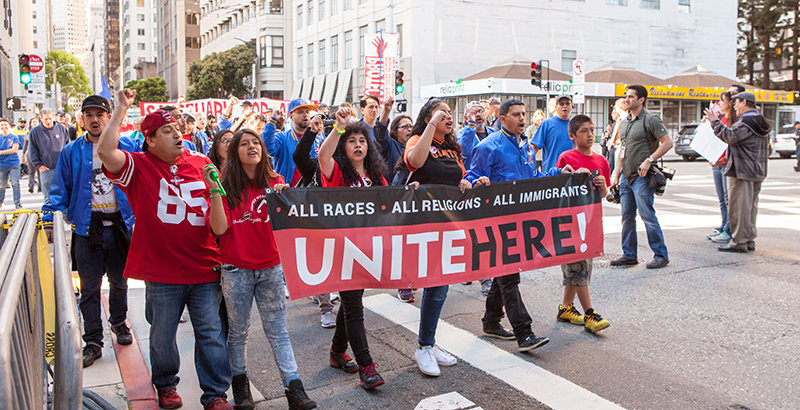 San Francisco on Tuesday will become the largest U.S. city to allow non-citizens to vote in a citywide election. But only a few dozen have registered, as anti-immigrant rhetoric has intensified leading into the midterms.

City voters two years ago approved the change, but for school board elections only, making it the first California city and one of only a few nationwide to enfranchise non-citizens. Parents, including those who are undocumented, with a child in the school district can vote. They must be “residents of San Francisco who are of legal voting age, not in prison or on parole for a felony conviction,” according to the local Board of Elections. Non-citizens cannot vote in state or federal races.

The move reflects the Golden City’s progressive history of empowering minority groups. San Francisco in 1989 became one of the first U.S. cities to declare sanctuary status for undocumented immigrants. In 2004, it issued the country’s first same-sex marriage licenses. It’s also become a leader of the resistance against contentious federal policies, suing President Donald Trump in 2017 when he threatened funding to sanctuary cities. And the liberal Democrat who is expected to become California’s next governor, Gavin Newsom, is a former San Francisco mayor now casting himself as a modern-day Abe Lincoln.

Letting non-citizens vote benefits school districts because it “provides an avenue for all parents to hold the school board members accountable to community needs,” said Norma García, director of policy and advocacy at the San Francisco-based Mission Economic Development Agency, which advocates for immigrant rights.

This year’s race in particular is shaping up to be “a historic moment,” García said. It’s attracting attention because of its crowded field — 18 people are vying for three open spots — the diversity of the candidates and sizable donations from the California Teachers Association.

Yet as of Friday, only 52 non-citizens had registered to vote, John Arntz, director of San Francisco’s Department of Elections, told LA School Report. About one-third of the school district’s 54,000 students are believed to have an immigrant parent, and two-thirds are either Latino or Asian-American.

“The level of unpredictability with respect to national policy on immigration has created fears that maybe are unwarranted, but it’s up to individuals to decide what they’re comfortable with,” García said.

Registering to vote as a non-citizen comes with warnings: Personal information, such as one’s name and address, could be “obtained by Immigration and Customs Enforcement (ICE) and other agencies,” according to a notice on the Department of Elections’ website. Those applying for citizenship would also “be asked whether you have ever registered or voted” in an election. 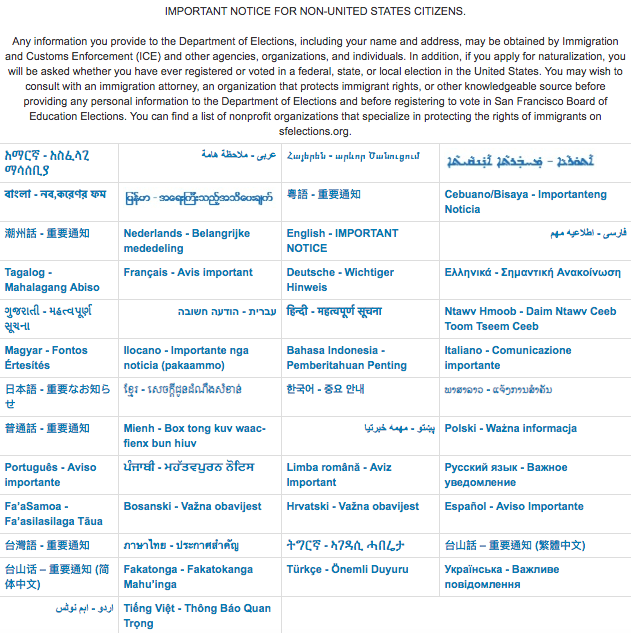 (Warnings in 50 languages, via the city’s Department of Elections website.)

These warnings likely resonated with non-citizens in light of recent headlines. Last Wednesday, Trump said that as many as 15,000 troops could be deployed to the southern U.S. border to block the arrival of thousands of migrants. This follows revelations midyear of immigrant parent and children separations and threats by the president to deport undocumented immigrants without due process.

Trump has also targeted immigrants who are in the U.S. legally, such as skilled foreign workers and those who were previously protected, such as undocumented students. Just one week before Election Day, he proposed ending birthright citizenship for children born in the U.S. to undocumented parents.

Every time you see a Caravan, or people illegally coming, or attempting to come, into our Country illegally, think of and blame the Democrats for not giving us the votes to change our pathetic Immigration Laws! Remember the Midterms! So unfair to those who come in legally.

“Families are in fear; this week it’s birthright citizenship, before that, it was family separations,” said Nick Melvoin, vice president of the Los Angeles Unified school board, who has been following the voting milestone in San Francisco. “I’m not surprised that undocumented families especially don’t want to come forward.”

Many D.C. lawmakers have denounced San Francisco’s decision to allow undocumented immigrants to vote. The U.S. House of Representatives, including nearly 50 Democrats, overwhelmingly approved a resolution in late September stating, “Allowing illegal immigrants the right to vote devalues the franchise and diminishes the voting power of United States citizens.” There are at least 40,000 undocumented immigrants in San Francisco.

Despite low registration numbers, the city is spending a projected $285,000 to both develop a registration system for non-citizens and conduct outreach, according to estimates Arntz provided. There was “no set number of expected voters,” he wrote in an email.

Even though non-citizen parents aren’t swarming the polls this year, García emphasized that it’s “not reflective of the will of the parents to be as involved as possible” in their kids’ educations.

There are other things parents can do even if they don’t vote, García said. They can stay in touch with their children’s teachers and principals, attend school board meetings to “speak out on issues [they] care about,” and contact the district supervisor with concerns. They can team up with other parents.

And many do, she said. “Their level of civic engagement is really notable.”

Melvoin, from the Los Angeles Unified school board, considers “actively engaged parents” essential to improving schools. And despite San Francisco’s election drawing so few non-citizens, he told LA School Report he’d like to see Los Angeles give it a try too.

“Given that there are few more important public services than public schools, those families should have a voice,” he said. “California has always been in the vanguard of progressive politics … and [L.A. is] a city that has embraced our immigrant heritage and immigrant population.”

Formal board discussions on the topic are on the back burner, he noted, as L.A. Unified’s tense labor negotiations with United Teachers Los Angeles continue.

Non-citizen voting wasn’t always an anomaly. About 40 states let non-citizens vote at some point in local, state, or even federal elections between the country’s founding and the 1920s. Anti-foreigner sentiment inspired by rising immigrant populations ended the practice.

For now, San Francisco, Chicago, and at least 10 towns in Maryland remain the few localities nationwide that are reviving non-citizen voting. Chicago only allows non-citizens to vote in local school council elections, which don’t require voter registration and are not citywide.

Boston is considering non-citizen voting in city elections, though only those with legal residency would be eligible and any change would require state legislative approval — something San Francisco didn’t need.

While this might not be the right moment in history to make substantial progress with non-citizen voting rights, it is just that, García said — a moment.

“Like other moments in history, it will run its course,” she said.

Non-citizen parents, like other voters, can visit City Hall to register and vote through Tuesday.