In a city where street violence has once again become common, it was still shocking front page news.

In just 10 months, more than 20 New York City children have been victims of gun violence, doubling data from the same time period just two years ago, according to the New York City Police Department.

The harrowing incidents of violence are constant.

A 14-year-old boy was shot getting off an MTA bus in Harlem earlier this month. The teen, who police say was the intended target, ​was grazed in the head by the bullet.

The shooting death of a 10-year-old Queens boy became part of the political landscape when mayoral candidates attended a peace vigil to end gun violence this summer.

“Too many of our young people have been deprived of the chance to grow old and to lead the lives they deserve because of gun violence,” said U.S. Representative Yvette D. Clarke, who represents central brooklyn, speaking at a gun buyback event on Jan. 30 after record high levels of gun violence in her district. “Our communities, our culture, and most importantly our youth, have all suffered.

New York City’s increase in shootings involving teens and children is not unique.

Across the country, 4,612 teens and children have been victims of shootings, with 1,215 killed this year — surpassing past years’ numbers and comparable to 2020’s record-high stats. 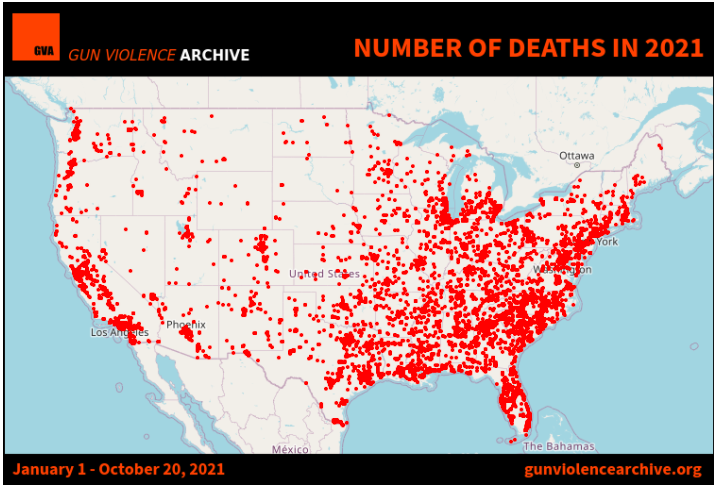 Hundreds of teens have been gunned down in Philadelphia and Chicago alone.

According to the ​​City of Chicago Violence Reduction Dashboard, 362 kids have been shot this year. Forty-three of the shootings were fatal. They are teens like 16-year-old Kierra Moore, a high school basketball star who died in a drive-by shooting on Oct. 14.

We really hope the @chicagosky does a tribute to #KierraMoore & all the young girls lost to #GunViolence this year in #Chicago!

“The pandemic is undoing any progress we had been making in reducing young people’s involvement in gun violence,” said Monica Bhatt, a Senior Research Director at the University of Chicago Education Lab and Crime Lab. Youth homicides were down almost 50 percent between 2016 and 2019, Bhatt said.

More than 170 kids have been shot in Philadelphia in the past 10 months, according to Office of the Controller data.

One 13-year-old was killed right outside of an elementary school in Philadelphia this month.

"The 13-year-old becomes at least the 166th child shot in Philadelphia this year"#gunviolence https://t.co/FGdJgncrPp

Across the country, sidewalks and street corners have become sites for vigils and memorials as communities gather to remember young lives lost — like the “well-loved student and athlete,” Xavier Louis-Jacques, who was shot and killed in April at the basketball courts near his home in Cambridge, Massachusetts.

A memorial sits at the scene where  6- and 7-year-old sisters were shot in August after leaving their grandmother’s home in Chicago.

But even vigils have become locations for violence: Just last week, a 16 year old was shot in Philadelphia during a vigil for another young gun victim.

My city is out of control.
Larry Krasner must resign.
Philadelphia shooting: Teen shot twice during vigil for murder victim: Police – WPVI-TV https://t.co/ZYimzrIFPy via @GoogleNews

“The pandemic brought on a lot of stressors that lead to mental health issues,” said Christopher Herrmann, an assistant professor at CUNY’s John Jay College of Criminal Justice and a former NYPD crime analyst. “An increase in mental illness will spark the violence.”

The Crime Lab has been working with Chicago Public Schools to identify, test and scale promising programming to reduce students’ gun violence involvement and criminal justice exposure and support their success in high school and beyond.

“The average student spends about 20 percent of their time in school and 80 percent of their time outside of school,” Bhatt said. “Teachers and school staff are the frontline for those that have to address the effects of trauma exposure — including the impact of gun violence — without being able to directly reduce that exposure themselves.”

The Children’s Hospital of Philadelphia responded to the alarming rate of gunfire with additional counseling services for youth victims, CBS Philly reported.

CHOP doctors are adding another layer of support to the families of children impacted by the rising gun violence affecting the youth in Philadelphia. @NatashaCBS3 reports. https://t.co/CzURntz18c

In New York City, parents and community members rallied outside of City Hall on Oct. 10, demanding an end to gun violence.

Eve Hendricks, who lost her son to gun violence, asks for increased school safety so students can learn without worrying about being attacked.

Every life matters regardless of the colors of our skins. pic.twitter.com/DUWMP4oFDd

Hendricks said kids should be able to go to school without worrying about being shot, and had a question for the parents of perpetrators.

“Parents,” Hendricks said at a recent rally, “how dare you raise monsters that take the lives of our kids.”

Meghan Gallagher is a producer at The 74.