A New Nashville School Is Integrating its Students, Eliminating Suspensions — and Acing the State Tests 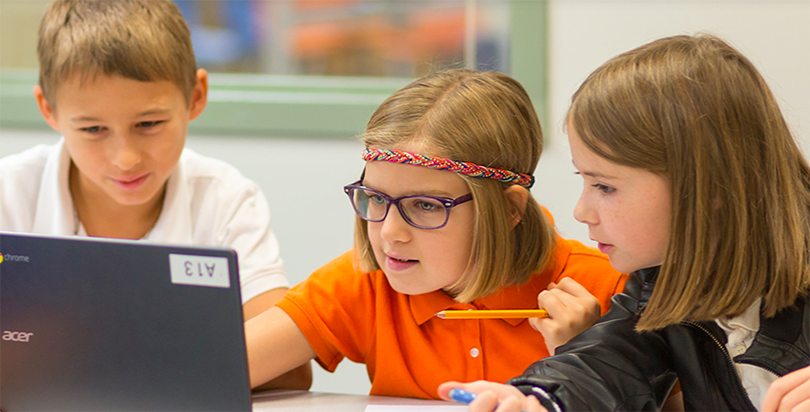 Updated Aug. 22
Brandi Kellett, 38, was making dinner for her family at her home in a gentrifying neighborhood of Nashville known as 12South when she realized that her 12-year-old son, now a student at Valor Collegiate Academies, was finally getting the kind of education she had long dreamed about.
When his younger brother started arguing—with a little bit of bravado—that he was definitely right about a particular issue, the Valor student questioned him. “Haven’t you ever heard of diversity of perspective?”
“I almost started weeping into the soup,” Kellett said.
Embracing others’ perspectives was exactly the kind of habit she hoped her son would pick up at Valor, a charter middle school especially designed to foster racial integration and social understanding.
“It is becoming instinctive to them to value the dignity in people unlike them,” said Kellett, whose two sons are enrolled at Valor this year. “I hope they are going to be the kind of people … who will even help kids, who also have believed the stereotypes about themselves, find new ways to (interact) in the world.”
Since its founding two years ago, Valor Collegiate Academies, which has expanded its two schools into 7th grade this school year, has a caught the attention of educators and parents across the region for its high student test scores and integrated classrooms.
Valor is also distinctive for its emphasis on social-emotional learning and restorative justice at a time when suspension rates and the racial competency and diversity of charter school teachers are being questioned at high-performing networks across the country.
“I was probably told at least 10 or 12 times that this wasn’t going to work here,” said Valor founder and CEO Todd Dickson.  “(But) we were able to do it.”
It’s a beautiful thing
The story of Valor begins in 2011, when former Gov. Bill Haslam signed a law that opened up charter schools for students in any school, not just those whose schools were considered to be failing.
Around that time, Dickson was working at Summit Public Schools, a California-based charter management organization known for its racially diverse student body and personalized learning.
Then-Nashville mayor Karl Dean was on a tour of Summit Public Schools when he met Dickson, who told Dean that he was exploring the idea of starting his own charter management organization. The school he had in mind would embrace social-emotional learning, personalized learning and a diverse student body. Dean began to recruit Dickson right then and there to start his school in Nashville.
Dickson said he was attracted to the Nashville area because the local school system included the surrounding suburbs, which meant there was potential to create mixed-income schools. The state had also recently won a federal Race to the Top grant, pumping energy into the region’s education reform movement.
That Tennessee was a Southern state which had historically struggled with institutionalized racism and was forced to desegregate its schools under Brown vs. Board of Education was not lost on Dickson.
“Part of my worry was, ‘Can we pull off a really diverse school in the South?’” he said. “On the flip side, it was (also) one of the most exciting challenges.”
To build a diverse student body, Dickson was strategic about where he placed the school and how he recruited families. The first school, Valor Flagship Academy, is located along Nolensville Pike in Southeast Nashville, which is close to predominately white neighborhoods but includes large populations of Latinos and Kurdish residents, he said.
“I did a lot of wine-and-cheese events in middle-income families’ homes,” Dickson said.   “We did a lot of things at churches for black families. And the mosques for the Kurdish families. We did a lot of door knocking.”
Thena Berry said it was Valor’s commitment to diversity that convinced her to take a chance on a new charter school for her 11-year-old daughter. Berry, who is black, attended a Massachusetts boarding school where she often felt left out as a racial minority. As a high school student, she had to defend the right to hold Black History Month events and once heard a classmate say that blacks couldn’t go to Ivy League colleges.
Berry doesn’t expect her daughter, Imani, now a 7th-grader, to face similar obstacles at Valor. The school seems to support students’ cultural identities, whether that means hosting a traditional Kurdish tea or accommodating students who are fasting for Lent, she said.
“They really support them. It’s a beautiful thing to see and there is no judgement in it. At least, no judgement that I have seen,” Berry said. 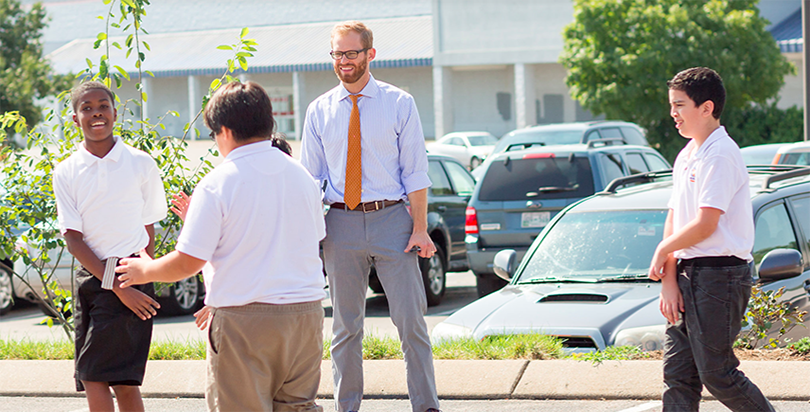 Photo: Courtesy Valor Collegiate Academies
Diversity: students first, staff second
During the 2014-15 school year, the student body was 21 percent Middle Eastern, 39 percent white, 17 percent Hispanic, 17 percent black and 5 percent Asian, according to the school. Of those students, about a quarter are English language learners and nearly 48 percent qualify for free or reduced-priced meals, according to state statistics.
Dickson said his goal is to keep the percentage of students who are on free and reduced-priced  lunch to just over 50 percent, enough to qualify Valor for federal Title I anti-poverty funds but not so much that it changes the balance of diversity.
In high poverty schools, he said, “the amount of resources it takes to really support (students) becomes overwhelming.”
“It is my hope that for a school like Valor that you’re serving low-income kids better but you are also re-engaging middle-income families,” he added.
But Dickson said there is one area in which the school has struggled with diversity: attracting minority educators.
“Our staff isn’t reflective of our kids,” Dickson said. “Twenty percent of staff are teachers of color. Our goal is to get to 50 percent.”
(The 74: A Student Protest at High-Achieving Charter High School Spotlights Teacher Diversity Struggle)
Part of Valor’s strategy in engaging a diverse group of students is to develop student character through its Compass program, which encourages and measures students’ social-emotional skills, including their ability to develop what Valor calls “sharp minds,” “big hearts and “a noble purpose.” Actions are then aligned to reflect those principles.
Under the program, students explore those themes during morning meetings  and in a mentor program, where a group of about 20 peers meet weekly with a teacher for two years.  There students might be encouraged to write about their life story or talk through their behavior challenges. As the adolescents move through the Compass program’s levels, they earn privileges, such as being able to eat in the school’s common area or receiving “flex time,” when they can pursue independent learning.
The school also uses the program to discipline students, focusing on restorative justice, where the goal is to rehabilitate, rather than punish or suspend, the offender by reconciling the wrong done to the victim and the community. There were no suspensions during Valor’s first year and 17 during its second when the student body expanded from some 100 students to 500 students, according to the school.
Dacia Toll, well known in the charter school world as the co-founder and co-CEO of the Achievement First charter network, spent time at Valor when the National Alliance for Public Charter Schools helds its annual conference in Nashville in June. She told an audience there she had never seen a school do social-emotional learning as well.
(The 74: Charter Schools to Rock Music City as National Alliance Celebrates 25 Years of School Choice)
Berry said she has seen firsthand how Valor’s social-emotional program helped Imani. In elementary school, she was often bullied emotionally and physically but those problems have disappeared at Valor. In fact, this summer at YMCA camp, it was Imani who stood up for another camper when he was being teased by a student, her mother said.
Out of 182 schools, number one
Dickson said integrating the social-emotional approach has been foundational to the school’s academic success. To buttress those efforts, the school spends 90 minutes on English and math each day and groups students in the 5th and 6th grades by ability level. In later years, students learn in fully integrated classes.
“I totally get why people worry about tracking. I think tracking is only as bad as the school that executes it,” Dickson said. “Tracking doesn’t have to be like that, if you have your best teachers working with the kids that need them.”
The network’s academic strategy has coincided with strong student test scores. During the 2014-15 school year, 94 percent of Valor students were considered proficient in math and nearly 79 percent tested proficient in reading, according to state data. Those results far outpaced the 47 percent of students in the county who tested proficient in math and the 39 percent who did in reading.
Last school year of the 182 public schools in the Metropolitan Nashville Public Schools district, Valor scored the highest on measures of academic achievement, beating out even the district’s well-regarded magnet programs.
This year the charter school management organization moved one of its schools into a brand-new building and increased the student body from 500 to about 750. Once both of its 5-8 middle schools are ready to graduate a class, Valor plans to start a high school.
Erica Lanier, 48,  is happy that she will be able to continue sending her daughter to Valor. As an active parent in the community, Lanier said she was apprehensive at first about sending her child to a charter school. At the urging of a principal at another school and another parent, she decided to take the plunge.
Within the first week, her daughter, now in the 7th grade, had started making friends. Lanier became impressed with her daughter’s diverse group of classmates and the school’s academic achievement.
“I was like, 'Oh wow, my little daughter is going to be more than OK,'” she said.
Submit a Letter to the Editor
August 21, 2016