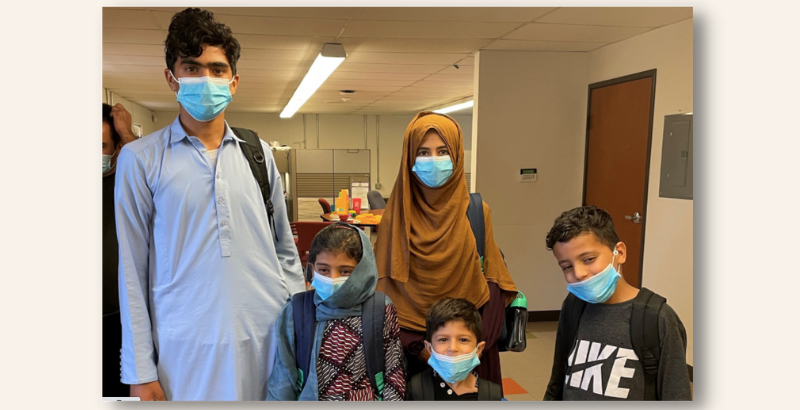 Texas school districts are accepting Afghan refugee students who must not only learn a new language and culture, but are also worrying about relatives and friends who have not been able to leave Afghanistan.

The state is poised to resettle approximately 4,500 Afghan refugees, second in the nation behind California.

“These students are resilient,” said Salimah Shamsuddin, Refugee Family Support Coordinator for the Austin Independent School District where about 50 refugee students from Afghanistan have recently been resettled.

“They’ve been through something so traumatic, and they’re coming to a new country, learning a new language, and it all can be challenging, but even so, they do pick up English a lot faster when they’re in the classroom.”

Still, she said educators are keeping in mind the hardships they have faced and the worry they feel about those left behind in Afghanistan.

“We do have to consider that they’re still really concerned for the well being of their family back at home,” she said. “So even though they’re here, it’s still a challenging time.”

The students, who join about 350 refugee students from Afghanistan who had previously been resettled in the area over the past few years, are arriving with limited English-language skills, so teachers use imagery as much as possible, she added.

Using images or drawings can help students express what they know conceptually before they have the words, Shamsuddin said, adding visual cue cards are used with words like “line up,” “stop” and “take turns.”

The cue cards are currently being translated into Dari/English and Pashto/English, Dari and Pashto are the most widely spoken languages in Afghanistan.

Austin ISD uses counselors and may also refer students to outside providers as well who understand different cultures, Shamsuddin said.

She said that for many, especially those who arrived in August and September — when the Taliban took over and there was heightened instability — there were concerns about families still in Afghanistan. Some may have experienced trauma,  depression, anxiety, PTSD and other challenges.

Shamsuddin and her team have conducted training for educators so they can be aware of cultural differences, including body language and communication style differences.

In western societies, people are individualistic and value the promotion of personal goals, while in non-western societies, there is more of a focus on group goals and the social unit, she said. In the school system, there is also a peer-support program that pairs a newcomer with an established student to better equip both with learning about the other person.

Shamsuddin noted that Austin ISD is used to new students arriving and that interpreters are available for families.

“So often, an interpreter is not used for things,” she said. “And if we really want to be truly equitable, then it’s important that we’re communicating to parents in their preferred language.”

Meanwhile, at Dallas Independent School District, the district considers not only the time needed for a newcomer to learn the language but also the new cultural and social environment, said Zeljka Ravlija, program coordinator for the Refugee School Impact Program.

Ravlija is currently conducting orientation lessons via Zoom using a PowerPoint presentation to prepare the schools and educators for the newcomers.

“These orientations are teaching on the cultural background of Afghans,” she said, including   lessons on ethnicities, the various regional languages spoken, and religious values in the country.

Educators are also being taught basic phrases such as “hello” and “thank you,” what holidays are important to the students in their home countries, gender roles, and name pronunciations, among other topics

Ravlija noted the challenges that many refugee students experience before their arrival in Texas, which may include poverty, war, trauma and other unstable factors. They often spend time in a refugee camp before resettlement.