A Mother’s Plea: My Son Was Bullied for Having Special Needs. His San Diego Charter School Saved Him. Now, Please Save His School 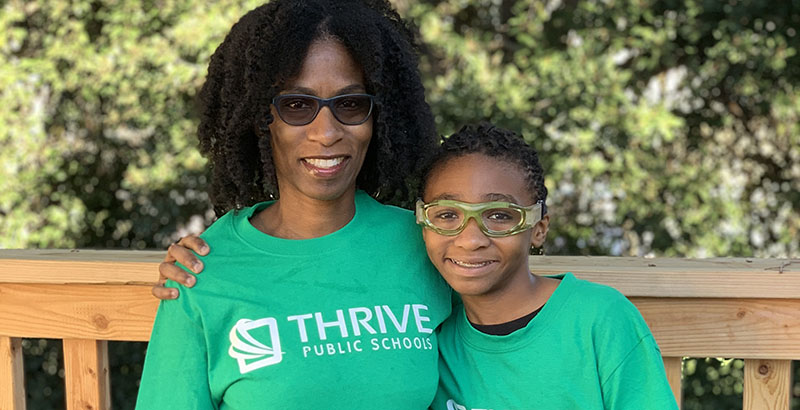 Wilhelmina Bradley and her son Tony

As parents, we send our children to school every weekday trusting that they will be provided not only with a quality education but also with a safe, supportive learning environment. Nothing prepares you for that moment when that trust is broken, and you watch your child struggle every day as the school allows him or her to be bullied.

Parents deserve a choice to protect our children and save them from emotional and physical anguish. As a parent, I had this choice. And I chose Thrive.

Thrive Public Schools opened their doors five years ago. In just a short time, they have grown to serve nearly 1,000 students in San Diego, many of them, like my son, having the highest needs. But after all the heartache we went through to find this school, it is now in jeopardy of closing. The San Diego Unified School District’s decision not to renew its charter was based on testing data that do not account for Thrive’s unique student population.

Students come to the school behind academically, and after three years, these same students have drastically improved their scores. But despite statistics that prove this academic growth, the data reviewed in the renewal process are being ignored. Now, the only opportunity to save Thrive, and my son’s future, is with the California State Board of Education in mid-March.

Throughout his life, my son was bullied because of his learning disabilities. I had to pull him out of class for speech therapy and counseling, and as he grew up he began to fight back against the bullies, further endangering himself. Fortunately, we were presented with an opportunity to choose a new school, and we took it.

Thrive has provided my son with not only a quality education but also the learning environment that no other school could. He went from being a shy, solemn kid who was never invested in school to an involved, active participant in the school community. He has not missed a single day of class and even joined the glee club.

The school’s personalized instruction has helped him grow academically and socially, and the diverse student population, with nearly double the state average of special education students, has made him feel more accepted than anywhere else. He is included in 98 percent of general classroom activities, which exceeds the average 58 percent inclusion that other special needs students receive.

The staff are always available and have been there to support him with any issues he might have. They create a wonderful learning environment that makes the students want to learn. We have never experienced an issue with bullying at Thrive, and he has grown more social and involved. As a parent, I could not imagine ever putting him through the pain that he has suffered again.

Without this school, we are left with very limited choices. I would never allow him to return to the trauma he faced at San Diego Unified, and homeschooling would restrict his growth and future. As a parent, I just want what is best for my child, and that is Thrive.

I am mother of a child who has been bullied, requires special education and support, and has struggled to find success. My son deserves the opportunity to continue to grow at the only school that has made him feel safe, supported, and accepted.

Wilhelmina Bradley is a San Diego mother of four. Her son is in fifth grade at Thrive Public Schools’ Mid-City campus.

Wilhelmina Bradley is a San Diego mother of four. Her son is in fifth grade at Thrive Public Schools’ Mid-City campus.