A HS Team Without a Band and a HS Band Without a Team Get Together for One Rocking Game. Now, They’re a National Sensation 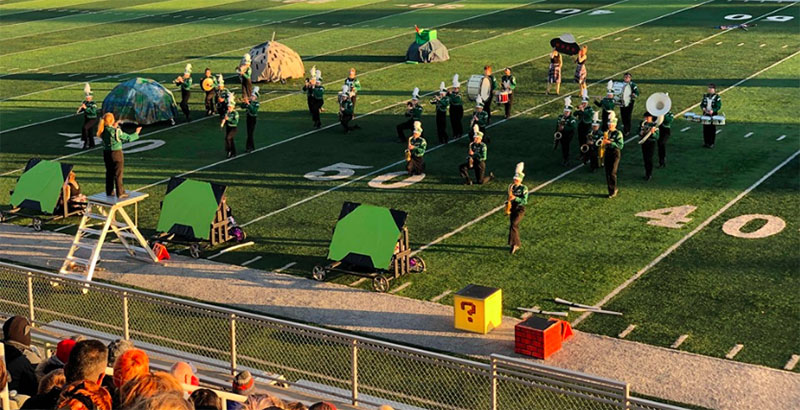 If there were a Match.com for high schools, two struggling northern Michigan schools could be its poster couple.

Forest Area cancelled their football season last week but their Marching Band got to play at the Glen Lake game tonight @upnorthlive pic.twitter.com/ZDc0gnpVOO

“As we know, Friday nights under those lights are very special, but having a sideline cheer team and a band to be rocking out with our fans and students and for our school and community, nothing like it,” Mark Mattson, athletic director for Glen Lake Community Schools, told UpNorthLive.

Lakers supporting the Forest Area Warriors (and all of the other great bands) at the District 2 Marching Exhibition at Thirlby Field! GO WARRIORS! #marching4ellen

Mattson said the idea to invite the Forest Area band came from a board member’s husband who had read that the Forest Area football team canceled its season because it had too few players.

“When I talked to the band, I said, ‘This is quick. We’ve got a three-day turnaround. You have to make an adult decision on whether you want to do this or not. We can haul all our stuff up there, arrange everything and help these kids out,'” Forest Area band director Brandon Deike told The Midland Daily News. “All the band raised their hands.”

Without a team of their own to play for, the Forest Area Warrior Marching Band mostly played in musical competitions, drum major Hannah Spencer told NPR. The invitation to play for an actual team was too good to pass up.

“I absolutely flipped. I was so happy,” Ashley Peckat, a senior, told UpNorthLive. “Since it’s my last year after playing for six years, it’s the most important thing to me to be able to be out here and show people what we can do.”

Deike said he believes his students also wanted to make the trip because they know what it is like for a school to be without a band.

“We were worse off than Glen Lake was,” he told The Midland Daily News. “We’ve been rebuilding since 2011. I think a lot of the kids remembered where we come from and what we had to face, and they really wanted to help these kids.”

And help them, they did.

The Lakers won, beating Gladstone, a team from Michigan’s Upper Peninsula, 31-7, Glen Lake Football player Ben Kroll said in an interview on NPR. Kroll said the moral support and energy his team got from the marching band probably helped.

“How many points do you figure the band was worth?” asked NPR’s Scott Simon.

It was a storybook ending, but Deike said he was still surprised by the attention the story received.

“We’re in northern Michigan, in the woods, and we’re removed from the country,” Deike told The Midland Daily News. “You never go into something thinking, ‘Well, let’s hope this makes the national news.'”

But now that it has, the schools want to take things a step further. They are trying to get the story told on national television.

“Basically, our school is low-income, low socioeconomic status,” Deike said. “We have nothing in the way of money, budget or instruments. We’re working with chicken wire and duct tape here. From what we’ve come from and where we’ve gone, for another school an hour away to call us and say, ‘Hey, come be our band,’ why wouldn’t you want to share that story?”