A Decade of Decline at America’s Teacher Preparation Programs: New Numbers Show Enrollment of Aspiring Educators Has Fallen By More Than a Third Since 2010 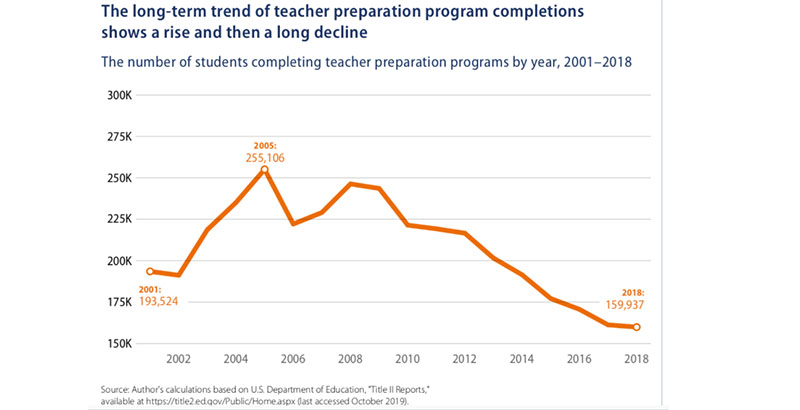 Since 2010 the nation’s teacher preparation programs have seen their enrollment drop by more than a third even as more students are pursuing bachelor’s degrees. At the same time, graduates of these programs declined by almost 30 percent.

The dwindling popularity of teaching as a profession means that 340,000 fewer students entered teacher preparation programs in the 2016-17 academic year, the most recent year for which data is available, than in 2008-09.

And though the nation struggles to diversify its teacher corps in the face of an increasingly more racially mixed student body, the share of black and Hispanic teacher candidates has declined by a quarter in the past decade.

A new report from the Center for American Progress seeks to explain where the drop-offs are occurring to tell a more precise tale of this national phenomenon.

The enrollment trough between 2010 and 2018 is considerably deeper in some states than in others. Enrollment in Massachusetts declined by around 15 percent. For Oklahoma, a recent site of teacher walkouts, the drop-off was 80 percent. In five states, enrollment in these programs actually grew, from a few percentage points in Nevada to more than 60 percent in Utah.

Similar wide swings occur by state when counting completers of teacher-prep programs. And though teacher-prep programs on the whole are losing enrollment, one type is actually gaining new pupils. Students seeking teacher training in programs that aren’t part of a higher-education institution grew by 40 percent between 2010 and 2018. The report notes that one such program in Texas is fully online and has no syllabus; instead, “the modules consist of videos and PowerPoint slides that students click through themselves,” the report said.

“We also know that when there’s a recession, enrollment in teacher preparation drops further” because students seek majors that lead to more lucrative careers, the report’s author, Lisette Partelow, said. With some analysts warning of an economic downturn in the near future, the steady drop in prepared teachers could be exacerbated. 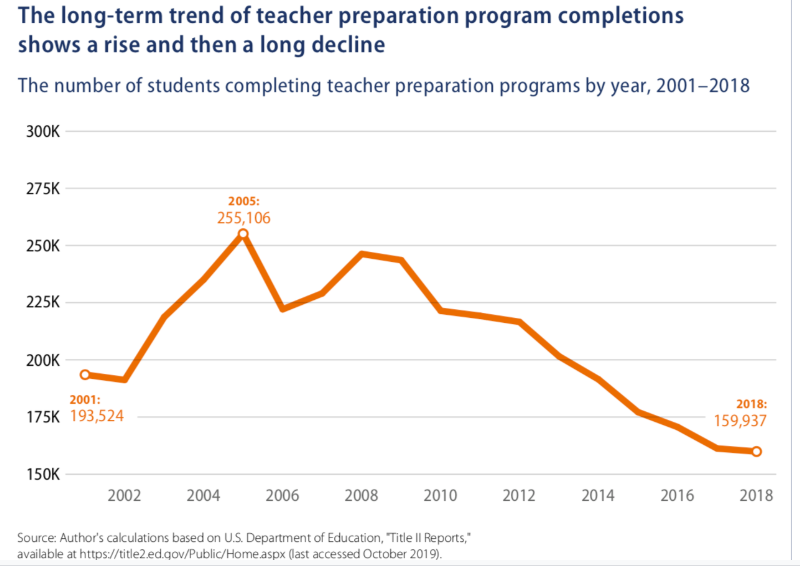 The teaching profession has been besieged by scrutiny from multiple flanks. Teacher walkouts and labor disputes over low pay and insufficient staffing for nurses, librarians, mental health counselors and other support staff have rocked some of the nation’s largest cities and several states, a phenomenon that has hit both Republican and Democratic strongholds. In February, an analysis of the pass rates for a popular teacher licensure exam showed that just 46 percent of test-takers passed on the first attempt, and the rates were lower for black and Hispanic candidates than for whites. Meanwhile, for the first time in an ongoing survey, a majority of parents in 2018 said they would not want their children to become teachers. In another survey released in 2019, 50 percent of teachers said they have thought about quitting the profession.

Compared with other adults who completed college, teachers’ total compensation is 13 percent lower in 2018, according to the Economic Policy Institute, which may help explain some of the shortages many districts report. A Brookings Institution analysis shows that the wage penalty is even more extreme for science and math teachers.

Even though older data suggest the country has more teachers than there is need in some categories, such as elementary school teachers, shortages exist in the fields of math, science, special education and English-language learners.

“If the overall decline in interest in preparation programs hides an even steeper decline of teachers who are interested in these high-need subjects and fields, it is critical that policymakers target solutions to address the issue,” the CAP report said.

The drop-off in teacher candidates for science and math disciplines is less severe than it is for teacher positions overall. That’s not entirely good news, though. These positions have endured shortages for years, Partelow said, and ongoing enrollment and completion declines in teacher-prep programs for these disciplines is just worsening a chronic problem.

There is a silver lining. Between 2012 and 2018, the number of aspiring teachers who earned credentials for teaching English-language learners or bilingual education increased by 30 percent.

The report also bemoans the weak state of data collection about the teaching profession at the state and local level. “I think it would be very helpful for folks to have both the supply and demand information at a pretty local level that reflects how local teacher labor markets are so that policy makers can respond accordingly,” Partelow said.

A 2018 analysis by the National Council on Teacher Quality calculated that just eight states connect teacher demand and collected supply data. More fine-tuned information that can drill down to the local level can also save states money by ramping up teacher production in one area rather than the whole state.

The report also recommends collecting data in such a way so that the public can know how many teacher-prep programs are run by for-profit colleges or are chiefly online. Without those distinctions, “there is no way to determine whether these programs have different outcomes from their nonprofit and brick-and-mortar counterparts,” the report said.