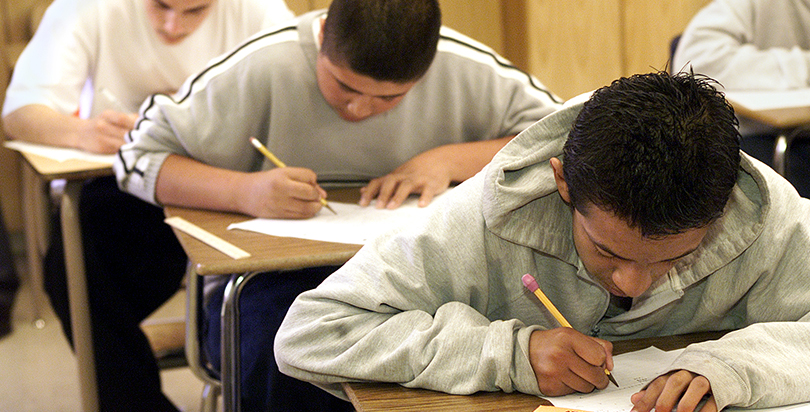 These gains are the largest since D.C. students began taking the exam in 2015, and they are greater than the increases posted by other states in the PARCC consortium. These improvements span schools and socioeconomic groups.

“DCPS students made unprecedented progress on the PARCC,” Chancellor Antwan Wilson said in a statement. “This improvement is a clear sign of student learning, our commitment to our young people, and our investment in the programs and curriculum that support the work.”

“Obviously, we still have a lot of work to do to make sure we are closing the achievement gap and that all students are thriving in school,” said DCPS Deputy Chief of Communications Michelle Lerner. “But we’re proud that we have these significant gains because it’s in every side of the city and it’s in every single grade and across every single subgroup.”

Lerner wouldn’t specifically comment on whether she thought competition from charter schools fueled the score increases in the traditional public schools. She credited factors like the district’s early adoption of Common Core standards and D.C.’s LEAP professional development program for teachers. “Professional development is quite wonky, but this is how you move the needle,” she said.

“Stunned that nobody is pointing out that [D.C. Public Schools] is now on pace w/ charter schools in math and outperforming in ELA on #PARCC,” tweeted Kaya Henderson, former chancellor of DC Public Schools. “Every time charters outpaced [D.C. Public Schools], it was highlighted at the press conference. #DCPS deserves its victory lap. #DCPSRising.”

Every time charters outpaced @dcpublicschools, it was highlighted at the press conference. #DCPS deserves its victory lap. #DCPSRising

In the meantime, D.C. educators celebrated the news Thursday.

I am so proud to lead DCPS in a city that invests in the next generation. These gains are a testament to everyone’s hard work. #DCPSRising https://t.co/Sn52vMwFHJ