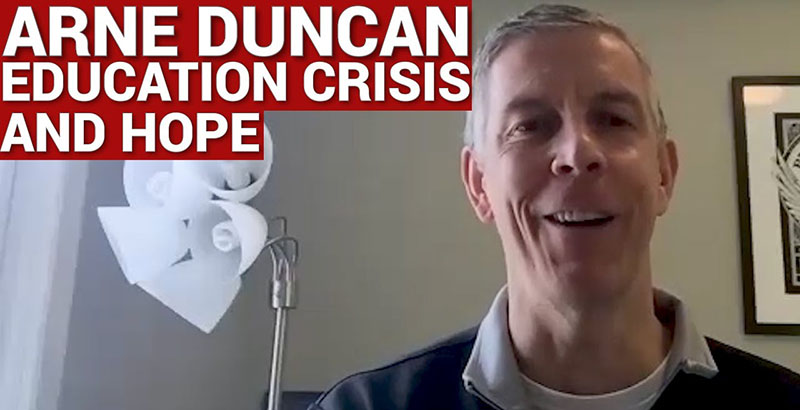 Arne Duncan is experiencing the novel coronavirus like the rest of us: worried about his family, worried about his community and worried about our country as a whole. But he’s also experiencing it as the leader of community work to reduce gang violence in Chicago, as a managing director at Emerson Collective — one of America’s leading philanthropic organizations — and, of course, as a previous urban school leader and a former U.S. secretary of education.

That’s why we wanted to talk with Duncan about what he’s seeing as schools and the country scramble to react to this remarkable pandemic. We were interested in what he’s witnessing, what is encouraging him and what he’s concerned about. And as a former federal official, what does he see as Washington’s role in education during this crisis? We sat down with him last week via videoconference to talk about all that and more. A few of the highlights:

Duncan is direct in his criticism of the Trump administration’s handling of the COVID-19 crisis. We reached out to the Department of Education to offer Education Secretary Betsy DeVos or another senior official an opportunity to share how they see it. The department did not respond to our request for an interview.

Here’s Duncan in his own words. The interview has been lightly edited for clarity.

It’s been a couple of weeks now, from the initial shock of schools closing across the country, to people coming to terms with what this is going to mean at least in the near term. What are you seeing? What makes you hopeful, and what are you concerned about?

Well, I’ll start by saying that when I led the Chicago Public Schools for seven and a half years, we never missed a single day of school. We never had a snow day, never had a teacher strike. And I took great pride in that. And it wasn’t obviously just the educational piece that was so important to me; it was that schools were often the safest place our kids were at any point during the day. That was where they were fed. So I don’t love the idea of schools being closed, but we had to close them, as a country. And yes, education is important, but this is about saving lives first. And so that had to happen. This is obviously an unprecedented — hopefully not just a once-in-a-generation but once-in-a-century type of crisis.

It’s unbelievably challenging. We’re all starting to lose friends to this. So it’s unbelievably real and scary. But I’ve been unbelievably inspired by the leadership I see at the state and local level. And I’m talking to superintendents on weekly calls.

I’m doing a ton of work around food distribution. Schools aren’t just places of academic learning. Schools are social safety nets. They’re doing an amazing job of feeding tens of millions of children and family members and community members every single day. So I’m hopeful, but there’s so much work to do, and we have to continue to work together and to see people take risks, learn, support each other. It’s a brutal time, obviously, and I definitely wish we weren’t here. But honestly, I’ve been really inspired.

You painted a rosy picture. But is there stuff that’s concerning you there?

So there are massive disparities. Massive inequities. Inequality, I would argue, is baked into our system of K-12 education in America. Anytime you have a system that is largely funded by local property taxes, by definition, the children of the wealthy get more than the children of the poor. That’s just what we have accepted as a country. And so that’s reality.

I don’t want to call it a positive, but the only good thing that I hope comes out of this is those massive inequities, inequalities, are slapping us in the face right now. We can’t hide behind them. And so we can take them one at a time. The digital divide: Can we use this as an opportunity to close that, once and for all? So that children, regardless of race or socioeconomic status or zip code or income, can learn anything they want, anytime, anywhere, anyplace? Can we as a society start to take on these huge challenges?

My goal here is not just to return to normal, whatever normal was, because frankly normal didn’t serve millions and millions of kids well before this crisis hit. We have to have the courage to envision a new normal where we fundamentally address these huge inequities. Yes, in educational opportunity, yes, in access to technology, but also access to good health care, to investments, to jobs. And if we can, as a country, have this kind of courage, that would be an unbelievable positive that could come out of this tragedy.

What are your thoughts on summer, and then more generally, the things that schools need to be doing over the next three to six months to help meet this challenge?

If — and this is a big if — if it is safe to reopen physical school buildings, I would love to see a massive summer school, maybe even mandatory summer school, for kids across the country. To give them the chance to make up for some of the learning loss, to give parents a chance to try and get back to work and get back on their feet, to get teachers working again. I think that would be fantastic. If that’s not possible physically, then how we continue to get better in this virtual environment is so crucially important.

I don’t want us to go back to the old normal. And there’s a whole bunch of things that this time allows us to think and to challenge. Can we think about the fundamental school year and calendar year? Can we think seriously about not seat time, but about competency? Can we think about what should truly continue to be online and learn virtually, and what should be done in a physical building?

We saw back in 2008, 2009, it was a tough economy when states made cuts to budgets — poor schools got hit much harder than the wealthy school districts. That’s a real challenge. That can’t happen again. We will see, unfortunately, parents losing jobs. We’re going to see a huge increase in Title I funding across the country. Can we re-envision and reimagine what children coming from very tough situations need?

And the last thing is this whole idea of many kids’ social and emotional needs first. There are a whole bunch of vulnerable kids, whether it’s from a health care standpoint or emotional standpoint, or from a food insecurity standpoint, who were hurting before this. And now those numbers have gone through the roof. And there’s a whole lot of kids where things were pretty stable, and their world has just been turned upside down. And I’m talking to school superintendents who are doing great things now, around telehealth, and counselors and psychologists and social workers reaching out to students, FaceTiming, texting, whatever it might be. But we have to be thinking about all of these things, and thinking about all of them concurrently.

What does the education field need to do going forward to make sure that in what seems like inevitable future stimulus bills, there’s more support for education?

My numbers won’t be exact, but when we did the [American Recovery and Reinvestment Act] in 2009, that was about $800 billion in education. We got $100 billion of that $800 billion, a huge investment. In the stimulus of what we’ve seen so far today, that was $2.2 trillion. So more than twice, almost three times what happened and passed before — I think only about $20 billion went into education. So the only conclusion you can draw is that education simply is much less important to the current administration than it was to ours.

If you had your experience during the last downturn to do over, what are some things that you’ve learned, you’d do differently? Some advice you would offer?

What is desperately missing is empathetic leadership. And what we see is, as bad as that time was, and as scary as that was, this time is worse. And will be worse for a long time. I’m not talking just about the COVID health care crisis. I’m talking about the devastating loss of jobs, many of which unfortunately won’t come back. And how do we help families who have been OK, who have made it, maybe made it paycheck to paycheck if they were making it, and now that is gone, and their world is literally turned upside down in the past two, three weeks. We have to think very differently about how we support kids and families.

The feeding piece of this is so hugely important. The emotional support is so hugely important. For me, those things are the foundational pieces. And if those are tight, then we should be talking about the academic rigor and doing some fantastic things to help students prepare not just to graduate from high school but to go on to college. But we have to build that base and strengthen that base in a way that we’ve never had to before, and take it with a seriousness of purpose. It’s so unfortunate that right now I don’t see any interest in those ideas.

If you’re a state education leader right now, what are the opportunities with this landing more in your lap, in terms of the education and social response?

I’ve been terribly disappointed by the lack of leadership and the lack of vision at the federal level for this issue, and for frankly a whole host of issues.

The leadership, the creativity, the sense of camaraderie and sharing of ideas at the state and local level, I think, has been unbelievable. Whether it’s around the health care piece of this, whether it’s around the education piece of this, everybody’s learning together. There is no competition. Everybody’s trying to win together. Folks are failing and making mistakes, but they’re sharing that with real humility and vulnerability and helping people learn and not replicate those mistakes.

The empathetic, humble leadership I’m seeing at the state and local level — that’s what continues to give me hope every single day.