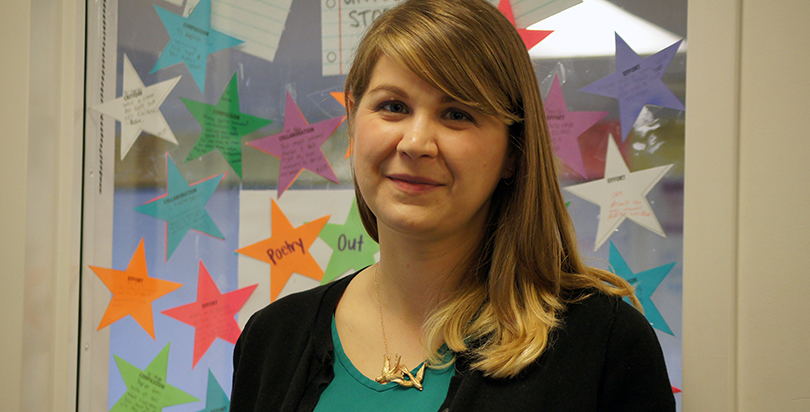 Sydney Chaffee, 2017 National Teacher of the YearPhoto: Courtesy of the Massachusetts Department of Elementary and Secondary Education

The 10-year veteran is the first Teacher of the Year from a charter school — an opportunity, she said, to make sure the public knows that charters are, in fact, public schools, and to advocate for tough charter accountability like the system that exists in Massachusetts.

Chaffee will spend her year traveling the country to represent teachers. She’ll focus on equity and social justice.

She spoke with The 74 in early March, on the day she and the other finalists were in Washington for their final interviews with the selection committee. The following conversation has been lightly edited for length and clarity.

The 74: Why did you become a teacher?

Chaffee: I was in college, I was at Sarah Lawrence, and I was studying all these things that I loved. I was studying poetry, and I was studying women’s history, and I had these amazing professors and they were all young women, feminists, doing this incredible work. They helped me become a learner … I was just on fire with this learning. So I decided, “I’ll never leave, I’ll stay here forever, I’ll be a professor, and this will just be my life and it will be perfect and I’ll become one of these women, and I will get to do for other students what they have done for me and I’ll just be learning forever.”

Then I ended up working for a summer … with rising seventh-graders and they were amazing, amazing people … It was just this incredible experience of building this community with them over the course of a summer, and taking kids through these educational experiences and these community-building experiences. I realized, this is amazing — actually, I don’t have to stay at Sarah Lawrence forever, because I can work with middle schoolers who are just these amazing little people. And I can get this all the time, and I can learn all the time and I can make a difference in the world. Then I became a teacher.

The National Teacher of the Year has a sort of platform she advocates during her year in office. What would yours be?

For me, one of the big stories that I want to talk about with folks is the story of equity and the story of social justice, and how do we make those ideas live in our schools and live in our classrooms, and how do we empower our students to take action towards a more just world, and to take action to create a more just world? I feel like all of the other sort of issues that I like to get involved in, it all always comes back to that idea.

What would you wish others know about your classroom, or your students?

My students are overwhelmingly students of color, primarily African-American and Latino students, and so thinking about what some of the trauma that they are experiencing by virtue of being students of color. What are some of the things that they are dealing with in terms of stereotypes that they’re facing or the effects of — not for all of them but for some of them — poverty, things like that? What trauma does racism inflict upon them? And how can we understand our students within this larger context of who they are as people and how they’re experiencing the world, and how can we hone our practice in the classroom and in the school to best support them in a trauma-informed way? 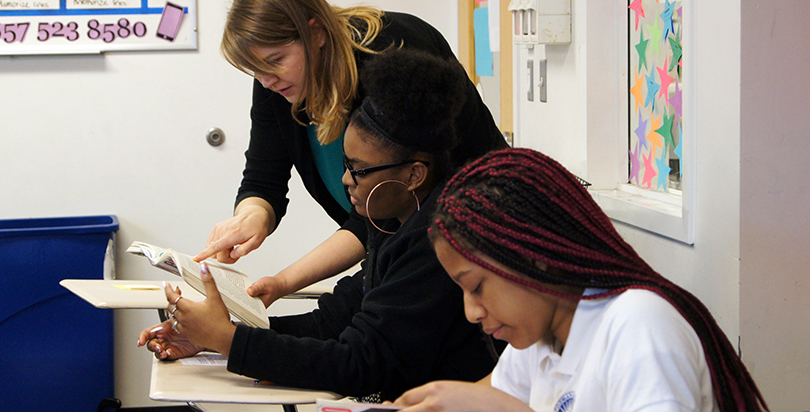 Sydney Chaffee, 2017 National Teacher of the Year
Photo: Courtesy of the Massachusetts Department of Elementary and Secondary Education

Every teacher in every classroom is going to have to deal with a different set of trauma. Is there some sort of overarching lesson that can be taught to teachers nationally, or is it more just “get to know your students”?

There’s brain science about trauma, and I only recently started to learn about some of it, and it is fascinating. You can actually look at the effects of trauma on an adolescent’s brain and how trauma will impact the way that physically and mentally they respond to, what would appear to others to be a minor setback. That trauma will permanently change a child’s brain.

Learning about those sorts of things as a teacher is incredibly eye-opening. Then, once you start to understand that, then you can start to look at “OK, well, what’s my toolbox of strategies, then, for when a child is going into that place,” and I can recognize, “Oh, actually what’s happening right now is due to this trauma.” The way that I react is very important in this moment, and there are research-backed practices and strategies that I can go to that will be better and safer for that kid.

Education has become a very contentious issue, particularly on a national level, since the start of the year. What would you advise President Trump and Secretary DeVos to do as they’re diving into education work this year?

The other thing that’s been really amazing to me is just learning all the ways in which we’re the same and all the ways in which all across the country and all across the state of Massachusetts we’re encountering similar things and we care really deeply about similar things. I think just going in with that, really the perspective of I’m a listener and I’m a learner, and let me learn about what’s going on in the country and what these constituents and these stakeholders are really interested in, that would be my number one advice. That’s my number one advice for myself.

There’s often controversy and misinformation in the general public about charter schools. Are there stereotypes you think you’ll have to refute, or messages about charters you’d like to communicate?

The biggest one, and this came out a lot in the Massachusetts [charter cap] debate last year, was just that charters aren’t public schools. I’m so proud to be a public school teacher. I’m so proud to work within the public education system, so that’s one thing that I work really hard to make sure is clear in conversations about charters.

…[The other thing is] charter schools and charter systems look really different all across the country. In Massachusetts we have a really, really strong charter system. One of the things I really want to talk about is the reasons that Massachusetts’s system is so strong.

One of the big reasons it’s so strong is that there’s accountability for our charters. The state of Massachusetts and the state department of ed and board of ed hold charters accountable for making sure that they’re doing really, really good work. That has resulted in really good charters. That has resulted in really good education for kids, so whenever we’re going to talk about charters as a whole, I think we have to talk about accountability as a crucial part of good charters.

What’s been your best moment teaching?

I cannot pick one, so I’m just going to tell you a story from last year. I had this girl in ninth grade, and she is an amazing actress. We were doing a poetry competition where she had to memorize and recite a poem. Everyone in the ninth grade knew she was going to win…. We got to the night of the performance and she becomes a finalist. And then a month later we get to the night of the finals, she gets up there, by this point everyone in the school, not just the ninth-graders, [knows] she’s a shoo-in.

Someone sneezes and she messes up … She didn’t win; she didn’t move on. She declared herself a failure. She had all these reasons why she shouldn’t have won and she didn’t deserve it and it’s terrible.

At the end of the year we always put on a play. So having seen this power that she had, my co-teachers and I made her the title character in the play. Of course at first she was sort of like, “Well, why would you give this to me? I messed everything up. I can’t handle it. I'm gonna mess up.” On the night of our play, she was a star.

She sort of came out and had this real redemption, and I attribute that both to her passion and her talent, but also the way that her fellow classmates sort of rallied around her in the lead-up to the play. They said, you know, “Hey, we know you’re amazing, and how can we help you?” and “Let’s make sure that you know your lines by heart,” and “Let’s make sure that sometimes when you’re rehearsing we do something distracting and let’s see what you can do.” She was able to see, “Oh, this one moment things didn’t go well, but that doesn’t mean I’m a failure, and actually I’m gonna pick myself up and I’m gonna do this other thing.”

Everyone in that audience witnessed this magic of this beautiful performance. That to me is such a great story because I just feel like I fail all the time. We all fail all the time. To be able to see a student fail in that moment and then come back and have such triumph that is like the beauty of this theater work that we do, but also just education.