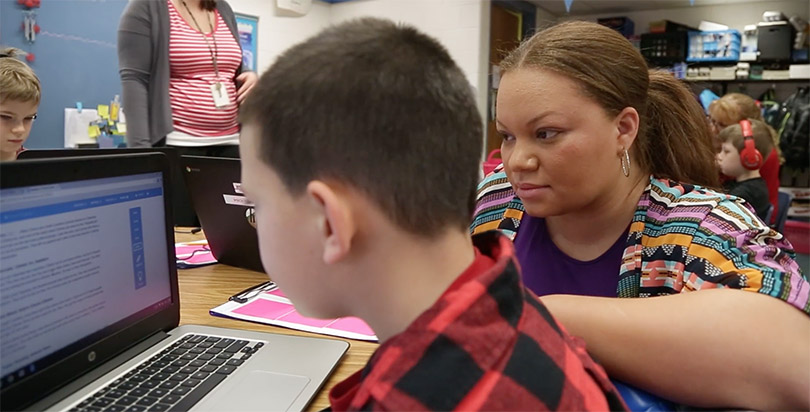 As fake news permeates American culture in a more pungent manner, teachers have realized the need to teach media literacy to students obsessed with social media. In response, Newsela, a teaching tool that writes current events and prominent news stories into differing reading levels for more than 10 million students across the country, has created a Media Literacy Initiative to help more than 1 million teachers guide students in comprehending stories and navigating media.

The initiative was not part of Newsela’s original plan. The three-year-old program gives teachers “text sets,” with a variety of articles on the same subject bundled together. This model helps students advance their reading and comprehension by looking at different sources on the same topic, Jennifer Coogan, chief content officer, tells The 74.

But when Newsela pushed out a single story on fake news for teachers in October — just as it would for any other current event — “We were blown away by how popular it was and by how many teachers liked it and assigned it to their classes,” Coogan says. “The response from teachers was really quite unexpected, so we started looking at our wires and grabbing anything we could about this.”

As Newsela latched onto fake news as an educational tool, it partnered with the American Press Institute and began annotating its articles with six questions that students should consider while reading media. This followed a series of election-specific sites for young people that Newsela launched with PBS and a mock presidential election run by the site in October, all part of an effort to introduce students to media literacy and civic engagement.

Those annotated questions — who wrote the article, what type of content is it, what evidence supports the facts, what is the interpretation of the fact, does it tell both sides of the story, and where can more information about the topic be located — have found their way into more Newsela articles than just those about fake news.

“We have been layering those questions into news articles about any news, trying to get students into this habit,” Coogan says. “I think they are very flexible questions you can apply to anything.”

Those skills are desperately needed, according to a Stanford Graduate School of Education study that found that 80 percent of middle school students surveyed believed that an article with the words “sponsored content” was a real news story.

“In every case and at every level, we were taken aback by students’ lack of preparation,” the study’s authors wrote. The researchers found that students couldn’t distinguish verified content on social media and didn’t factor in an author’s obvious bias when rating an article’s trustworthiness.

Coogan says teachers have taken up the cause of helping students resist fake news, as it dovetails with skills emphasized under the Common Core State Standards, such as reading text closely, citing evidence and distinguishing main ideas.

“The skills fit in so seamlessly with things they already need to teach,” Coogan says. “While it is scary that kids are so vulnerable [to fake news], it is a great classroom opportunity, and the reason we have been successful is that kids are always keen when the lesson in the classroom reflects the real world and they can talk about Twitter and Facebook in the classroom. Kids are obsessed with social media, so getting them to look at Twitter in the classroom setting is fun.”

Within the media literacy program, some students are assigned to write both real and fake news stories, while other students practice distinguishing between the two. Students also craft tweets with real news and other tweets with fake news. All along, the teacher-led discussion can push forward the idea of discernment between the two.

Coogan says the content particularly resonates with kids in middle school and up, both because they better grasp the economics of how websites can make money on fake news and because at age 13 — the minimum age to have a Facebook account — many of them deal with the issue on a daily basis.

But Newsela starts its content at a third-grade level for a reason. “When you do get that first social account,” Coogan says, “they are grounded with the idea that you can’t believe everything you read.”