5 Things We Now Know About Teacher Diversity: What Researcher Constance Lindsay Has Found About Race in School 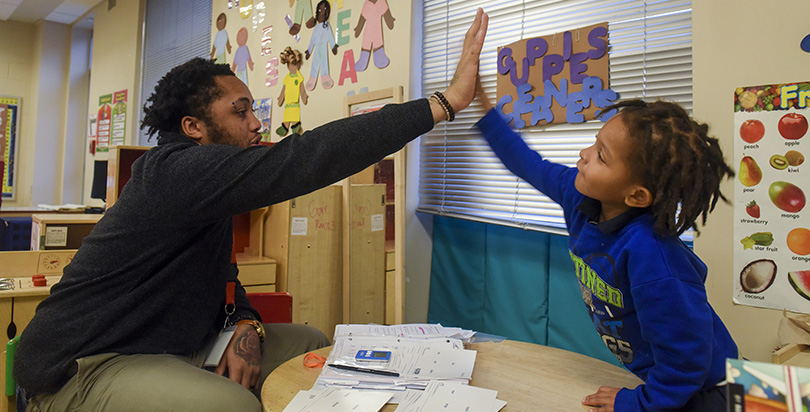 They are the newest findings on teacher diversity to make national headlines: The dropout rate of black students drops by a third when they encounter just one black teacher during elementary school. Low-income black boys stand to benefit the most.

The first-of-its-kind study, which I detail in greater depth here, was conducted by American University’s Constance Lindsay and Seth Gershenson working in tandem with Cassandra Hart of the University of California, Davis, and Nicholas Papageorge of Johns Hopkins University. The team focused on students and teachers in both North Carolina and Tennessee. Lindsay appeared last month, at the Association for Education Finance and Policy conference, to present her findings and walk through her methodology to fellow researchers.

I sat down with her after her presentation for a brief conversation about this new research, her past studies showing the link between teacher diversity and student discipline, and how the teacher workforce is not reflecting the diversity of the student population. (Lindsay’s responses have been edited and condensed for length and clarity.)

Here are five things to know about the current research on teacher diversity:

Matt Barnum: Can you talk about your paper on the long-run outcomes of teacher race matching?

Constance Lindsay: This paper focuses on North Carolina. To our knowledge, this is the first paper looking at: If you had at least one black teacher in grades three through five, are you less likely to drop out of high school and more likely to go to college?

We find that that you are.

2. Teacher diversity can be particularly valuable for low-income students

Constance Lindsay: This sample is limited to black students, and we also look at those black students who had free and reduced-price lunch the entire time their way in three through eighth grade, so persistently poor black students. What we find is, we see these overall results, and then we see that when you break the sample down by males and females, both for everybody and the persistently poor, the results are driven by the boys and the results are biggest when you look at the persistently poor black boys.They’re less likely to drop out of high school and more likely to indicate that they’re going to enroll in college.

That’s the North Carolina data. What’s nice is, we used data from Tennessee and did the same thing — much older data, and a randomized experiment. So they were randomizing on class size but then that also randomized teacher race. We do find that if you have one black teacher in kindergarten, randomly, there is decreased dropout and increased sitting for a college entrance exam, the SAT, or ACT.

Matt Barnum: Can you describe your research on teacher race and student discipline?

Constance Lindsay: My paper on student discipline is looking at same-race teachers, which basically in North Carolina ends up being a black student matched to a black teacher, and then looking to see what the outcomes were in terms of exclusionary discipline — any disciplinary action that takes you out of the classroom: out-of-school suspension, in-school suspension, expulsion.

It’s a short-run outcome, and it looks at it in elementary, middle, and high school level, and basically finds that at all levels, being matched to a black teacher decreases these exclusionary discipline outcomes for black students. There are some gender differences in effects. The effects are more acute for young black men because their rates of discipline are higher, which is also a similar story in the long-term paper.

Matt Barnum: What types of disciplinary offenses might be driving that?
Constance Lindsay: We can study the data by type of offense. The one that has the biggest impact is the “willful defiance” measure, which is an indicator of teacher discretion because it requires the teacher to read into some sort of behavior and then make a determination based on that behavior. So you get this really big impact for willful defiance and that goes down the most when you have a same-race teacher. We see smaller impacts for things like if you did something violent. We don’t see anything for drug outcomes, which makes sense, since there’s no discretion. The willful defiance is the biggest one, and that’s the teacher discretion piece.
4. Increasing teacher diversity doesn’t harm — and may actually help — discipline of white students
Matt Barnum: Do you see the same matching effects for white teachers and white students and Latino teachers and Latino students?
Constance Lindsay: We see no effects for white students, so there’s no loss for white students of having a black teacher. We have a previous version of the paper where we just looked at elementary school, and we find there’s actually positive effects for all students when they’re matched to a black woman teacher.
We don’t have enough sample size to look at Latino students, because in North Carolina there just aren’t enough Latino teachers to do the matching. We basically have to take them out of the sample.
5. The American teaching workforce is nowhere near as diverse as the student population
Matt Barnum: What do you think the policy implications of these two studies are?
Constance Lindsay: I think the biggest policy implication of these two studies is teacher diversity — just increasing it. If you look at the beginning of the school discipline paper, one of the things that we point out is that in fall 2014 the majority of public school students is now minority, but the teaching workforce is about 80 percent white, and it’s flat. Some other stuff I’m going to be doing in the future, we’re actually seeing the percentage of black teachers has been going down over time. Not a ton, but for example in North Carolina over the time period we’re looking at, the black teachers went from about 15 percent to 13 percent. Not huge. The black students are ticking up, the Latino students are shooting up. And the Latino teachers are flat.
You could make that argument both from a student outcomes perspective and as a democratic goal — we should have a diverse public school teacher workforce. I think that’s the most straightforward policy application.
One of the things that we see is that for our persistently poor black kids in North Carolina, they’re less likely to see a black teacher overall. That’s another interesting thing. In both instances, about 50 percent of our sample has never had a black teacher in elementary school, which I thought was pretty surprising. But then, conditional on having one black teacher for the persistently poor kids, they have a lot more black teachers later on, which is probably an artifact of the fact that they’re in more segregated schools.
To the extent that you can reallocate teachers — which I don’t know if you can do — you could move them around to places where black kids don’t see any black teachers at all.
Submit a Letter to the Editor
April 10, 2017