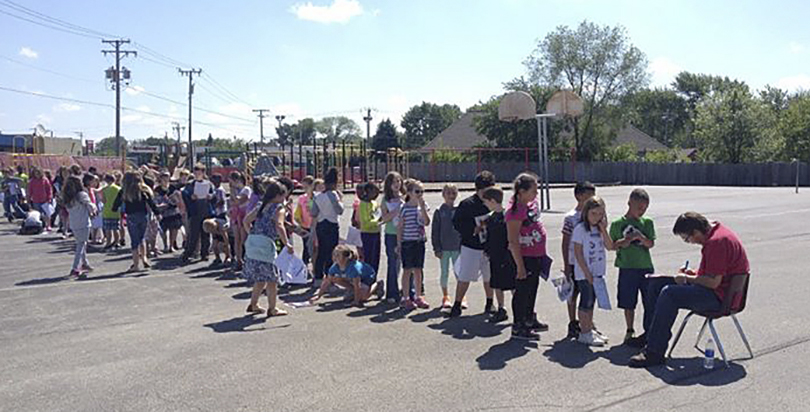 This article is one in a series at The Seventy Four which profiles the heroes, victories, success stories and randoms acts of kindness to be found at schools all across America. Read more of our recent inspiring coverage at The74million.org/series/inspiring. Photo courtesy Alan Shepard Elementary School.
It was a stirring and spontaneous outpouring of love that made national headlines in late June, when a line of students 300 deep suddenly formed on the playground of a central Illinois elementary school – not a line for a slide or a swing or a water fountain but for “Mr. Steve,” the school’s beloved janitor.
The kids had their yearbooks, and they wanted Mr. Steve to sign.
Steve Weidner, a father of four, has achieved rock star status during his 15 years as custodian at Alan Shepard Elementary School in Bourbonnais. His fans affectionately refer to him as “Mr. Steve,” the kindly hero who spends time talking and playing with them when he isn’t busy with his janitorial duties.
When that annual schoolhouse tradition of yearbook signing rolled around, the students naturally wanted the autograph of their school’s biggest celebrity. But first they had to track him down. Weidner was walking through the playground after lunch one day when a bunch of students ran after him, according to ABC News. At first, the scene was chaotic.
Describing the moment for Today.com, Weidner said, ”It was pretty overwhelming for me with them all screaming for my attention and waving their yearbooks in the air. But after we organized a line and I sat down, it ended up being really fun."
When asked what makes ‘Mr. Steve’ so special, student Capri Ireland told Fox & Friends, “He will come to play with you outside sometimes after recess and it just makes all the boys and girls really happy.”
A photo of the signing was posted to the school’s Facebook page on June 3. Two days later, the image was shared on the popular social media site Reddit where it has reached over 3 million views.
Weidner took to Facebook to comment on his newfound status as rock star, writing. “You all have great kids! You are the rock stars for raising your kids to be respectful children! They make my job fun and rewarding!”
Submit a Letter to the Editor
July 15, 2015