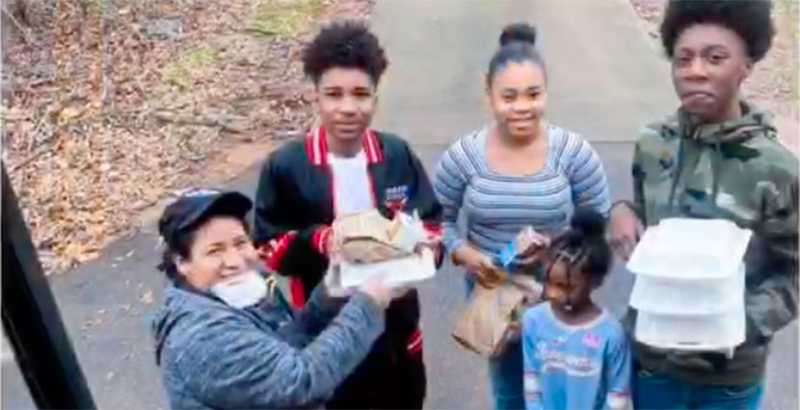 If there were ever a time to quote Mr. Rogers, it’s now.

“When I was a boy and I would see scary things in the news, my mother would say to me, ‘Look for the helpers. You will always find people who are helping,’” Fred Rogers said.

During this COVID-19 pandemic, school personnel nationwide are showing themselves to be the helpers.

In Anderson County School District 5, in South Carolina, everyone from teachers to principals helped out to provide meals for students of New Prospect Elementary School, the Independent Mail reported. Cafeteria workers reported to schools closed by the coronavirus outbreak to prepare breakfast and lunches, which teachers and staff then boarded buses to deliver.

In Illinois, students from Carbondale Elementary School District #95 can either come to the school for a grab-and-go breakfast and lunch or have it delivered by school bus. Nearly two-thirds of the district’s students receive free or reduced-price lunch, but as long as school is closed, any student up to 18 years old can request a meal, The Southern Illinoisan reported.

“Even if shelves were completely stocked, there would be so many families that would not be able to go to the grocery store to buy food right now,” said Robby Clark-Stokes, interim principal at Thomas Elementary School. “We have a large number of children here that depend on these two meals they get here every day. Any kid that walks through the door is going to get a meal from us.”

In Missouri, 50 or so food service workers in the Kansas City Public Schools gave up their spring break to make meals for thousands of students who were sent home because of the coronavirus outbreak, the Kansas City Star reported.

“This is about feeding the children in this city,” cafeteria worker Stephanie Sanders told the Kansas City Star. “I’m happy to do it.”

Children who are hungry in Wenatchee, Washington, can either come to school to pick up a meal or visit a designated drop-off site, the Wenatchee World reported.

“In this time of uncertainty, we want to make sure we’re stable,” said Chris Lutgen, the district’s nutrition services director. “We’re trying to combat the hunger in our community.”

In sprawling school districts like Roscommon Area Public Schools in Michigan, where 850 students are spread out over 350 miles, reaching hungry children means a long bus run, Bridge Michigan reported. But that didn’t deter the district from providing meals during the school shutdown.

'Schools across Michigan have been closed for nearly a week, but waiting for the bus remains a daily ritual for hundreds of students in Roscommon Area Public Schools…"
via @BridgeMichigan https://t.co/ZzX6SaF3e7#MichEd #MiEducation #SchoolsGetItDone

The support staff at Red Lake Middle and High School in Bemidji, Minnesota, jumped at the chance to ride the school bus and deliver meals to the students they have been missing in the week since the district, on the Red Lake Reservation, closed, the Bemidji Pioneer reported.

“They’ve just been super excited to see us, even though it’s only been a few days,” said behavior interventionist Jamie Lindseth. “Most of them have come running out, especially kids that we’re close to.”

For sheer volume, though, it’s hard to top the Chicago Public Schools, which handed out 90,000 meal packages in three days, the Sun-Times reported. Each package included three days’ worth of breakfast and lunch, adding up to more than a half-million meals.

Schools hand out over 500K meals in 3 days of coronavirus closures: ‘This is something great Chicago’s doing for us’ https://t.co/6l6bZmQr6Y via @NaderDIssa pic.twitter.com/oDeG7w8TX8