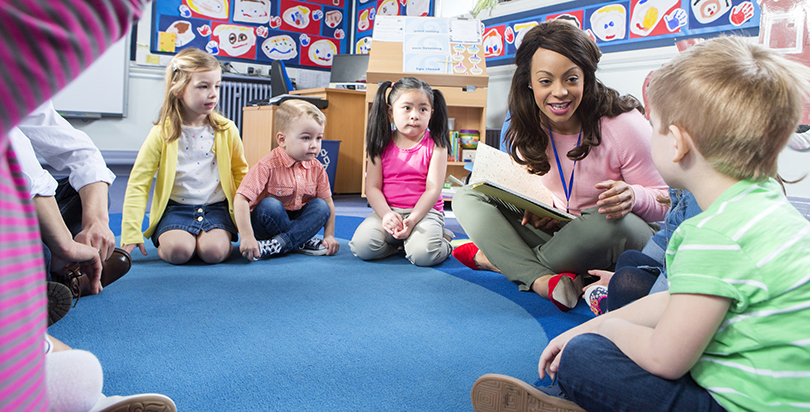 Inadequate funding of the federal Head Start preschool program has resulted in dramatic differences in the number of children served and the quality of the programs in each state, according to a new study.
“Currently, overall funding for Head  Start is not adequate, and the distribution of funding across states is neither rational nor fair…. The extent to which Head Start has the capacity to achieve its goals is far too limited generally and varies dramatically state-by-state,” wrote authors Steven Barnett and Allison Friedman-Krauss of the National Institute for Early Education Research.
Nationally, the study found, the program serves less than 40 percent of 3- and 4-year-olds living in poverty (defined as $24,300 for a family of four), and less than 5 percent of children younger than 3 in poverty (who would be served through the Early Head Start program). Properly funding Head Start, the authors found, would cost $20 billion a year.
“I think most people in the public think that any child in poverty that wants to go to Head Start can. Of course, most of them can’t,” Barnett, the institute’s director, told The 74.
Across the states, the study found wide disparities in the number of children enrolled: Among 4-year-olds living in poverty, for example, while 100 percent of eligible children in North Dakota attended Head Start programs in 2014–15, just 17 percent of eligible children in Nevada were enrolled.
(The 74: Washington, D.C., the Pre-K Capital)
The study, which the institute says is the first to analyze enrollment, quality, duration and funding of Head Start programs state by state, also found dramatic variances in program quality, teacher education levels, average salaries, program duration and amount spent per child.
While Head Start programs in 15 states reached or exceeded generally accepted levels of instructional quality for early-childhood education, a swath of states, starting in Virginia and spanning the southern portion of the country west to California, came in significantly below those benchmarks.
“I expected differences across the states,” Barnett said. “I didn’t expect them to be as stunning as they appear when you look at the maps.”
Barnett explained that states don’t have any say in setting standards for Head Start programs, as they do for K-12 schools, so grant recipients must consider the limited funding they get and prioritize one element — teacher qualifications and salaries, number of children served or program duration, for example.
“My explanation for [low instructional quality in] the Deep South and Southwest is that they’ve likely made the decision to serve more kids for more hours, and that makes it very hard [to have high-quality programs]. If you’re paying teachers $22,000 a year, as they are in Mississippi, that makes it really hard to provide quality. But if you paid your teachers $42,000, you’d have to serve them for half as many hours or serve half as many kids,” he said.
(The 74: Analysis – Hillary Clinton Is Right About Head Start)
The U.S. government currently spends a little over $8 billion a year on Head Start, and the authors estimated it would require slightly more than $20 billion annually to provide high-quality programs to half the country’s low-income 3- and 4-year-olds for six hours a day, 180 days a year. This would include children from families earning up to 200 percent of the poverty level, to account for fluctuations in family income and other factors.
New research from economist James Heckman found that quality early-childhood programs from birth to age 5 deliver a 13 percent return on investment — even higher than the 7 percent to 10 percent return for programs for 3- and 4-year-olds that he previously calculated.
The authors recommended that an independent, bipartisan commission investigate the issues raised in the report and consider not only increased funding for Head Start but also ways to collaborate with state- and locally funded preschool programs to enroll greater numbers of children.
“I don’t see the money coming without that conversation,” Barnett said.
Submit a Letter to the Editor
December 14, 2016