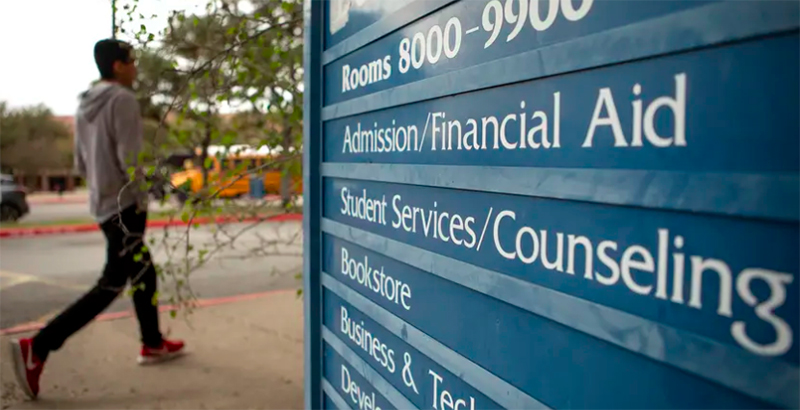 Texas colleges and universities will get an additional $2 billion in the latest round of federal coronavirus stimulus funding — half of which must be used for financial grants to students struggling due to the pandemic, the U.S. Department of Education announced Tuesday.

The federal government also announced that undocumented and international students can now receive those emergency funds, too, rolling back a Trump administration rule that allowed schools to distribute grants only to students who qualified for federal financial aid, which excluded non-U.S. citizens.

“We applaud the Department of Education’s decision to include undocumented students in federal higher education funding,” said Jonathan Feinstein, Texas state director for The Education Trust. “We hope that Texas colleges and universities will take full advantage of the policy to get this critical support to all students and maintain our long-standing commitment to the academic success and economic opportunity of undocumented students.”

The $36 billion released across the country Tuesday as a part of the American Rescue Plan Act was allocated to schools based on a formula that included the number of low-income students enrolled. Four-year public universities in Texas will receive the largest share of funding, with the University of Houston, Texas A&M University and the University of Texas Rio Grande Valley getting more than $100 million each. Public community colleges in Texas will get an additional $430 million, including nearly $38 million for the Texas State Technical College campuses.

This is the third round of funding released to two- and four-year schools by the federal government during the pandemic. Texas received around $1 billion in the first round of funding under the CARES Act, which was primarily used to combat abrupt losses from meal and housing reimbursements and canceled events as the pandemic began.

A university spokesperson for the University of Houston said this new funding will continue to offset revenue losses and recoup costs of measures related to COVID-19. Joseph Pettibon, Texas A&M University vice president for enrollment and academic service, said the flagship university plans to use the money to invest in more technology in the classroom and enhance broadband service on campus as more students rely on personal devices to do their work.

“Something that the students have really appreciated is the ability to have access to recordings of lectures, even in traditional setting of a class, so they can go back and reference it,” he said. “So investing in those type of resources that will help students and their learning environment.”

The Department of Education is directing schools to prioritize giving money to struggling students. They can also use the money to retain and reengage students who have dropped out of college, by providing mental health support and help with classes, or to cancel student debt at their institution that was accrued during the pandemic. Schools can also use the funding to cover costs related to COVID-19, reimbursement for lost revenue and technology upgrades.

Colleges and universities must also use part of the award to help prevent the spread of COVID-19, either to fund testing centers or to spread vaccine awareness and set up vaccination sites. Schools can also use the money to provide paid time off to staff to allow them to get vaccinated.

The influx of funding comes as the Texas Legislature is debating how much money to put toward higher education in the state budget for the next two years. Texas higher education leaders said the one-time influx of funding will help students continue to enroll and complete college despite the challenges of the pandemic, but more investment is welcome.

“The Coordinating Board continues to underscore to our state legislators the important role Texas colleges and universities play,” Texas Higher Education Commissioner Harrison Keller said in a statement. “They are the tip of the spear for both near-term recovery and long-term economic competitiveness.”

Pettibon said these federal dollars are meant to help address the effects of the pandemic and cannot be used for areas like personnel and salaries, which are often among the largest parts of a university budget.

“It’s really designed to be used as one-time money, not pay for ongoing personnel and operations,” he said.

Currently, House and Senate versions of the budget maintain the 5% cuts to four-year universities enacted last year due to the pandemic, while the House version includes some additional funding for state financial aid that would help maintain current funding levels for state grants.

Higher education officials have also been holding out hope that the state will increase funding to postsecondary institutions by another $1.2 billion to unlock billions of dollars of federal funding allocated to the state’s K-12 schools. However, state officials applied for a federal waiver to bypass that financial commitment.

“Texas students and educators, both in higher education and K-12, don’t need a waiver. We need more funding,” the groups said. “Our school districts and higher education institutions need the additional resources to recoup pandemic-related expenses, address learning losses and operate safely as we work to emerge from this health emergency.”

This article is published in partnership with TexasTribune.org. Disclosure: The Texas State Teachers Association, Texas A&M University, the University of Texas Rio Grande Valley and the University of Houston have been financial supporters of The Texas Tribune, a nonprofit, nonpartisan news organization that is funded in part by donations from members, foundations and corporate sponsors. Financial supporters play no role in the Tribune’s journalism. Find a complete list of them here.