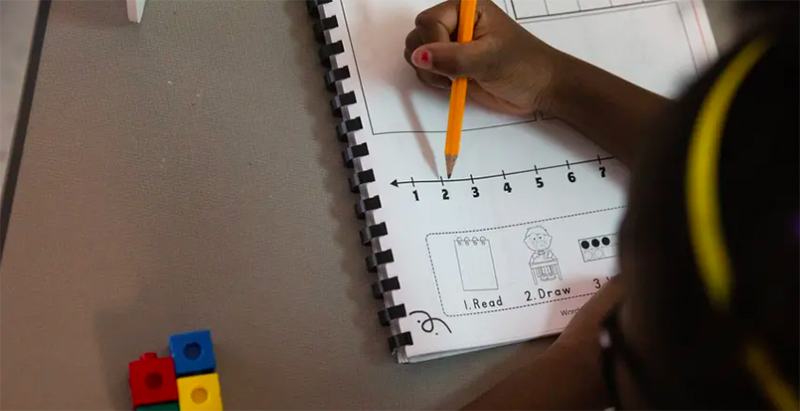 After Congress passed the first stimulus bill last year, officials used the state's $1.3 billion education share to fill other holes in the state budget, leaving public schools with few additional resources to pay for the costs of the pandemic. (Shelby Tauber for The Texas Tribune)

For more than a year, the federal government has been pumping billions of dollars into school districts across the country to help them meet the demands of the pandemic. Most states have used that pot of stimulus funds as Congress intended: buying personal protective equipment for students and teachers, laptops for kids learning from home, improved ventilation systems for school buildings to prevent virus transmission and covering other costs.

But in Texas, local schools have yet to see an extra dime from the more than $19 billion in federal stimulus money given to the state. After Congress passed the first stimulus bill last year, officials used the state’s $1.3 billion education share to fill other holes in the state budget, leaving public schools with few additional resources to pay for the costs of the pandemic.

Now, educators and advocacy groups worry that the state could do the same thing with the remaining $17.9 billion in funding for Texas public schools from the other two stimulus packages. Because of federal requirements, Texas has to invest over $1 billion of the state’s own budget in higher education to receive the third round of stimulus funding for K-12 public schools. Experts said the state has applied for a waiver to avoid sending that added money to higher education, but the process has caused major delays in local districts receiving funds they desperately need.

“Principals’ budgets are being eaten up with personal protective equipment, with tutoring, with trying to get kids back engaged, while the Legislature is sitting on a whole bunch of money,” said Michelle Smith, the vice president of policy and advocacy for Raise Your Hand Texas. “And that will have an impact on our school districts not just this school year, but for several school years to come.”

A spokesperson for Gov. Greg Abbott told The Texas Tribune that state leaders are waiting for more guidance from the U.S. Department of Education before opening the spigot and letting billions flow down to school districts.

Because of the state’s waiver request, Texas lawmakers likely will not decide how to parcel out the money until they either hear back from Washington D.C., or until the Legislature finalizes its plans for the state budget. But the waiver only applies to the latest stimulus package, so the state could unlock $5.5 billion for education from the second relief bill at any time.

Libby Cohen, the director of advocacy and outreach for Raise Your Hand Texas, said dozens of states are already sending these federal dollars to public schools, and the most recent stimulus package also includes guidance on how to use that money. Texas and New York are the only two states that have provided no additional funding to public schools during the pandemic, according to Laura Yeager, a founder of Just Fund It TX.

“We find it baffling that Texas is pumping the brakes on this particular issue to the extent that it is,” Cohen said. “The dollars are there … and districts need to know if and when they’re coming because they’re writing their budgets right now, and they’re making decisions about summer programming right now.”

Many Texas teachers and administrators say they need money now, and want the Legislature to start funneling the federal funds to school districts as soon as possible.

But state lawmakers holding the most power over budgeting and education funding want the Legislature, instead of local school districts, to decide what to do with these federal stimulus dollars.

“The federal funds will ultimately get to school districts but the overriding question is how should these funds be spent and who should make that decision?” said Rep. Harold Dutton, D-Houston chair of the House Public Education Committee. “I think the primary obligation for educating Texas children vests in the Legislature according to the Texas Constitution.”

The Legislature’s hesitancy in unleashing the funding complicates the path forward for educators around the state. Dr. Mark Henry, superintendent of the Cypress-Fairbanks Independent School District in Houston, said he’s already in the process of building two different plans for next year’s budget: one including the federal relief funding meant for the school district and a contingency plan for moving forward without it.

If Cypress-Fairbanks ISD eventually does receive its expected share of the stimulus education funding, Henry said he plans to move those dollars toward mental health support services that students will need while transitioning back to in-person learning this coming fall. Many districts across Texas have struggled to engage students this year, and many students have simply stopped attending online classes.

“We’re looking at high schoolers that are disengaged, and they’re dropping out of school,” Smith said. “And instead of giving school districts additional resources to go find those kids, those kids are lost right now.”

A spokesperson for the Texas Education Agency said districts can still access funding from the first federal stimulus bill by submitting a grant application to the department, but experts added that such regulations often discourage smaller school districts with fewer resources from attempting to receive the funds.

“Even though school buildings closed due to the pandemic two-thirds of the way through the school year, Texas’s school districts are fully funded for the entire 2019-20 school year,” the spokesperson said. “Despite significant reductions in economic activity caused by COVID-19-related shutdowns, it is important to note that school district funding has been fully preserved here in Texas, which is not the case in many other states across the country.”

Tuesday morning, representatives from Raise Your Hand Texas left a six-foot tall stool in the state Capitol building with the message “Fund TxEd Recovery.” Last week, the House Appropriations Committee adopted a minor change to the state budget demanding that no stimulus education funds “shall be used to reduce state funding for local education agencies.”

Adding that language to the budget offered a key win for Texas education advocates, but the state senate declined to include almost all of the nearly $18 billion in federal funds for Texas public schools in the new version of the budget that it passed Tuesday afternoon. In a news release, the Texas State Teachers Association described educators as “angry” at senate members over this decision.

“There’s a lot of people that are making decisions about education who have never spent a day teaching a class or managing a campus or running a school district,” Henry said. “So as long as you have people making decisions that have never been in those roles, they’re not going to make great decisions.”

Disclosure: Raise Your Hand Texas and the Texas State Teachers Association have been financial supporters of The Texas Tribune, a nonprofit, nonpartisan news organization that is funded in part by donations from members, foundations and corporate sponsors. Financial supporters play no role in the Tribune’s journalism. Find a complete list of them here.