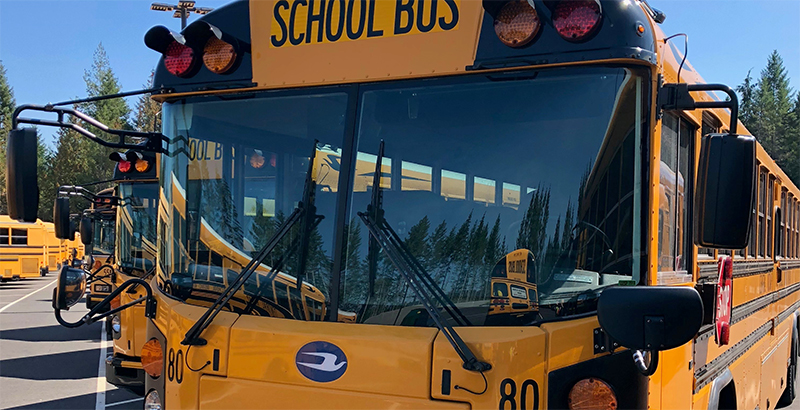 Distance learning starts in two weeks in Washington’s Central Kitsap School District, and Debbie Bryan, director of information services and technology, still isn’t sure how she’s going to connect students in some of the district’s more remote areas to the internet.

It’s not for a lack of technology, she explained: The district has 10 internet-enabled school buses in its fleet, every school building is “blasting out Wi-Fi in the parking lot,” and the district handed out personal hotspots to families as fast as Bryan could buy them.

But those efforts aren’t always reliably reaching the students who need them.

“We have a big pocket of our area where the personal hotspot or the bus hotspot is not going to do us justice,” Bryan said, noting the more wooded and hilly areas along the Hood Canal, where there’s less cable for high-speed connections. “Those folks down there are so underserved.”

Rolling Wi-Fi-enabled school buses into neighborhoods and distributing personal hotspots to families were part of districts’ rapid responses to getting families online once schools closed in the spring. But such programs have limitations and don’t always provide students the high-speed connections they need for Zoom classes and completing assignments — especially if there are multiple students in the home.

For example, the Louisa County Public Schools, located about halfway between the Virginia suburbs of Washington, D.C., and Richmond, has received attention for its innovative Wireless on Wheels, or WOW, program — a small fleet of solar-powered hotspots on trailers, stationed in church parking lots and other open areas. Students will begin building the Wi-Fi carts in shop classes for some hands-on experience. Users, however, have to be within 150 feet to get online, and the district is still using buses to transport students to the hotspots. 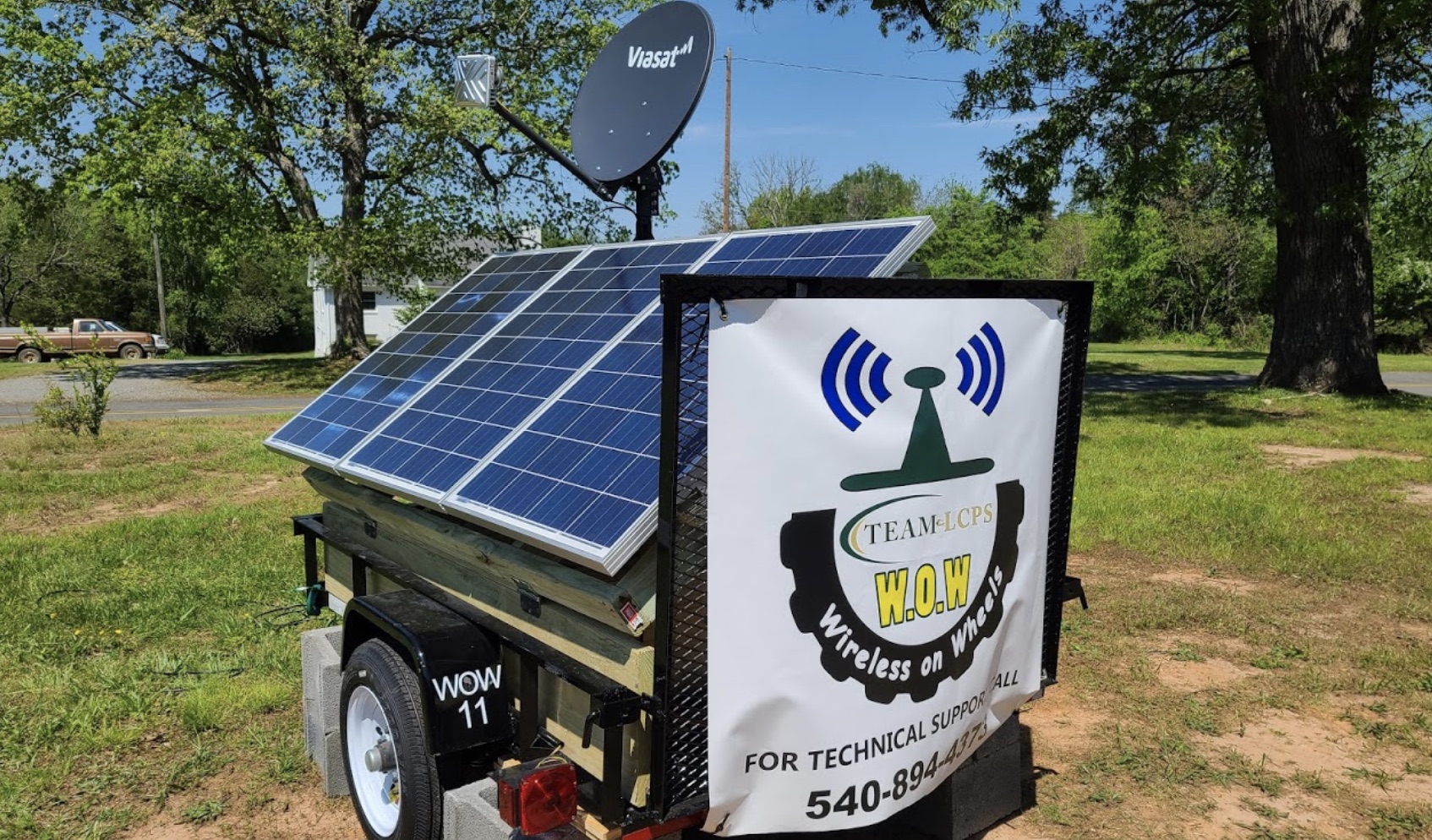 While the problem permeates much of rural America, the lack of broadband can even be an issue for students living in tech hubs.

Across the country in California’s Santa Clara County, Lorena Chavez is working as part of a coalition to expand free community Wi-Fi. The effort began six years ago, but in that time, the attendance area for only one of seven high-need school communities was connected. A second community was connected this month, and a third should be hooked up by December.

“We’re Silicon Valley. You think we have everything,” said Chavez, a school board member in the East Side Union High School District, in San Jose. “It’s crazy how some of these discrepancies exist in our community. Now this is a basic need, like water and energy, to survive in COVID.”

As another school year begins, the continuing inequitable access to at-home internet for students has experts and advocates looking for greater leadership from the federal government.

The Federal Communications Commission’s E-Rate program provides significant discounts on telecommunications services and equipment schools and libraries need for internet service, but that’s where it stops. Even before the pandemic, the Government Accountability Office was urging FCC Commissioner Ajit Pai to explore ways to expand the program to cover at-home broadband for students. But Pai has held firm that he is “duty-bound” by the Communications Act to fund broadband only to schools and libraries — not homes.

One of the Democrats’ pandemic relief bills includes $1.5 billion for hotspots and other devices. They also want $4 billion in E-Rate funding so districts can buy more devices and pay for internet service to students’ and teachers’ homes. Negotiations with the Trump administration, however, remain stalled.

Hotspots and routers on buses are “helpful but certainly not ideal when you want every kid to be online every day for a large portion the day,” said Michael Flood, the senior vice president of Kajeet, which provides wireless service to 2,000 districts nationwide and has connected bus fleets in 400 of them.

“The tech is not the hard part,” he said. “This is really an issue of funding willpower.”

“We are flailing at this right now,” said Robert Pianta, dean of the Curry School of Education at the University of Virginia. The school released a survey last week, along with the EdTech Evidence Exchange, showing that almost a fourth of teachers responding didn’t cover any new instructional material during the spring closures and more than half said they covered less of the curriculum than they would in a typical school year.

“There was zero redundancy in the system,” Pianta said. “We were utterly dependent on a very thin margin of live instruction and the delivery of curricula that way.” 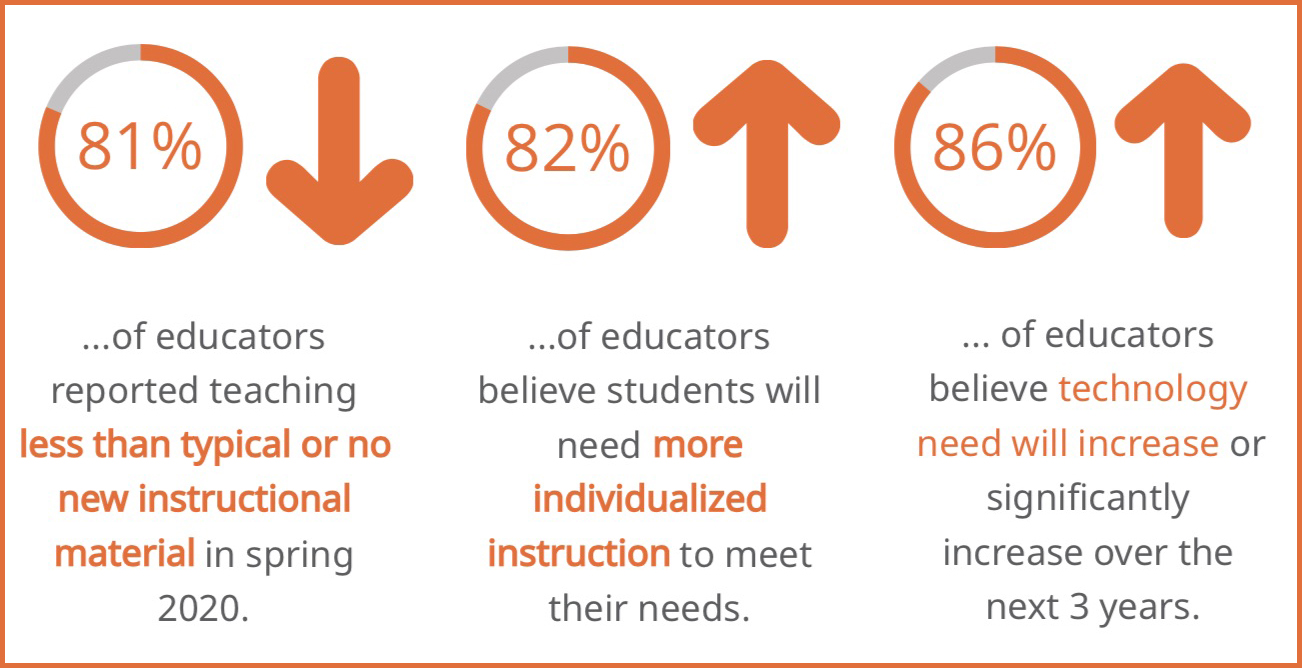 ‘Homework from their phones’

Without wider access to the internet for students, efforts continue to expand bus Wi-Fi programs and outfit libraries with signals strong enough to reach families in the parking lot. Alabama Gov. Kay Ivey, for example, has used $10 million in federal relief funds to equip every bus in the state with a Wi-Fi router.

As with Louisa County’s WOW program, however, many of these solutions require students to leave their homes to get service — a scenario that officials have tried to avoid.

“We didn’t want people to gather,” said Ashley Greaney, a spokeswoman for the Downey Unified School District in California. Students, she said, knew they could access Wi-Fi if they came to a campus, but the district didn’t want to promote that as an option. Still, she added, “we found a lot of our kids were doing the homework from their phones,” which isn’t ideal for studying and uses up the minutes on their own data plans.

Schools also distributed about 200 hotspots to families during the spring. But now the district serves as the internet provider and issues Chromebooks with built-in hotspots.

Some of the same coverage challenges exist with Wi-Fi-enabled school buses. Even if districts add connected buses or other locations where students can access the internet, transportation might still be required to get there. Unless a bus is parked right in front of someone’s house, students have to be close enough to pick up a signal.

“Depending on where we would place them, we would connect some students, but not others,” said Brian Shih, a principal network consultant at the nonprofit EducationSuperHighway. “That was a huge deal breaker.”

As part of a pilot program, the organization worked with the West Contra Costa Unified School District in California on deploying buses with “super hotspots” to communities that were likely to have more low-income families. But “the district found the time in managing these and figuring out which locations the bus driver should go to wasn’t worth the effort and didn’t reach enough kids,” Shih said.

That’s also Bryan’s challenge in Central Kitsap. The students without internet access don’t all live in the same neighborhood, so sending out buses doesn’t solve the problem.

The technology for school bus hotspots is improving, however. This summer, the Cumberland County Schools in North Carolina spent about $40,000 on buses with the same kind of routers used in first responder and emergency service vehicles. Up to 60 users should be able to connect to one router, and “the goal is that kids don’t have to come out of their homes,” said Stacey Wilson-Norman, the district’s chief academic officer.

Many states and districts are also using federal relief funds to buy individual hotspots for students. The challenge of that option increases, however, when families try to connect multiple devices to that hotspot. The quality of the connection is also “entirely dependent on the carrier and location of the device,” Shih said. “Your signal can change dramatically.” 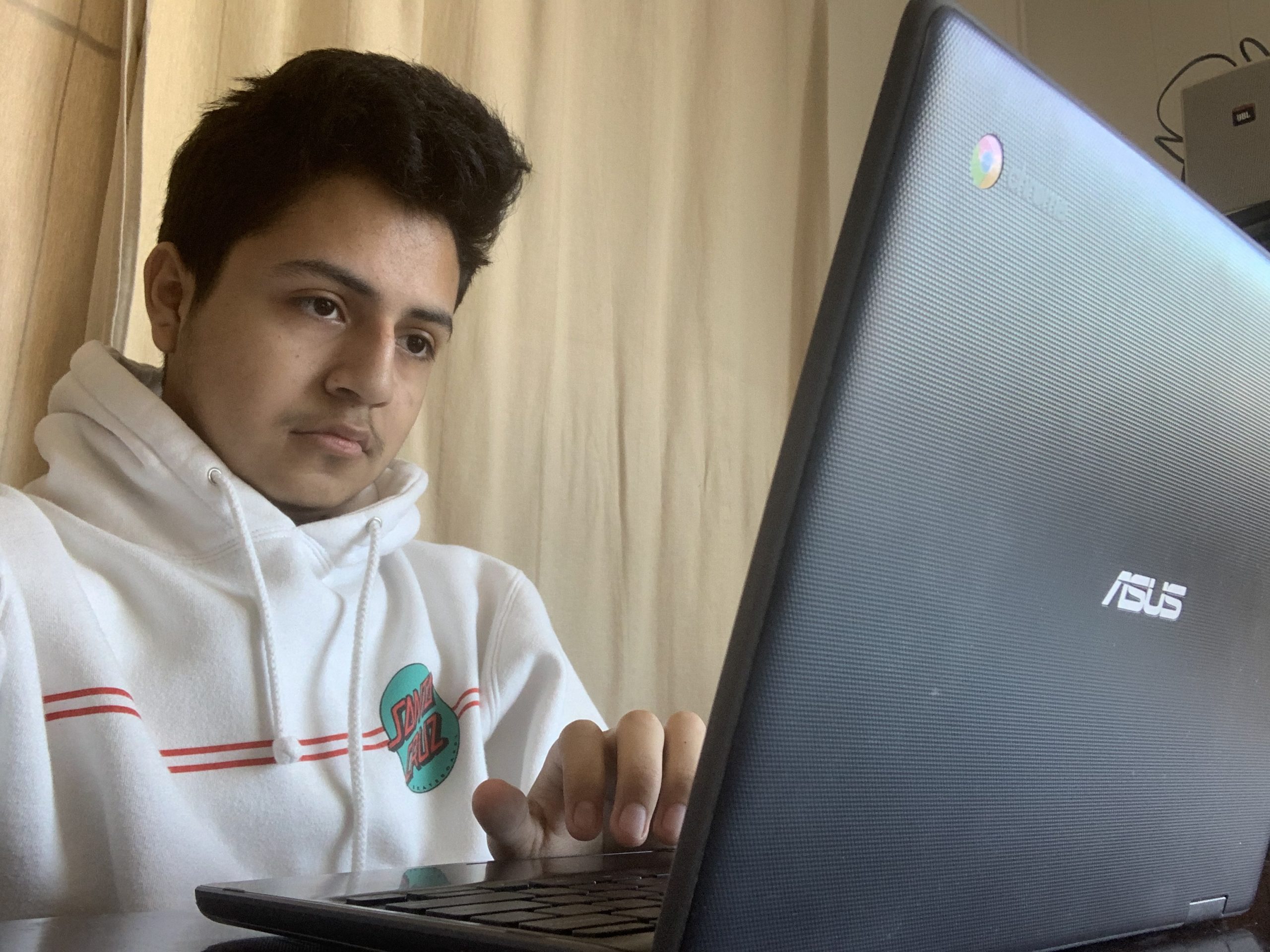 Senior Ulises Altamirano sometimes goes to a nearby McDonald’s to pick up Wi-Fi when the internet connection slows down in his house. (Rosario Altamirano)

In May, Ulises Altamirano, a senior at KIPP San Jose Collegiate, was in the middle of submitting his essay for the Advanced Placement U.S. History exam when the system started buffering, and he grew concerned that the work he’d completed would be lost. Connection speeds using the family’s hotspot are fast at the beginning of each month. But they slow down as the data plan runs out each month, making it difficult for him, his mom and his sister, a college student, to all get their assignments and work done. “Sometimes we have to go to the McDonald’s nearby,” he said.

The lack of internet service is not limited to students. According to Common Sense Media, 400,000 teachers in the U.S. lack internet service. But the University of Virginia/EdTech Evidence Exchange survey showed that teachers are expecting their reliance on technology to increase — not only this fall, with many schools still operating remotely, but also over the next three years as they continue to address learning loss related to the pandemic.

“Every child needs access to the internet at home to learn. You can’t equivocate on that point,” said Joseph South, chief learning officer at the nonprofit International Society for Technology in Education. He said he hopes the “contingent in Congress” that wants to increase E-Rate funding is successful.

As former director of the Office of Educational Technology at the U.S. Department of Education during the Obama administration, South worked to expand broadband in schools across the country, reaching a milestone of having 97 percent of classrooms connected.

But now because of the pandemic, the focus has shifted to the federal government’s role in making sure students are connected in their homes. Angela Morabito, a spokeswoman for the department, highlighted the Rethink K-12 Education Models Grant, a $180 million program within the March federal relief package that includes microgrants for access to technology. She added that the department’s Office of Educational Technology is bringing together representatives from government and the for-profit and nonprofit sectors to work on broadband access.

“We’ve been doing ed tech in one way, shape or form for a long time, and yet it seems utterly incapable of helping us solve the problem,” Pianta said. “But given the circumstances ahead of us, ed tech is the only way we’re going to address this.”