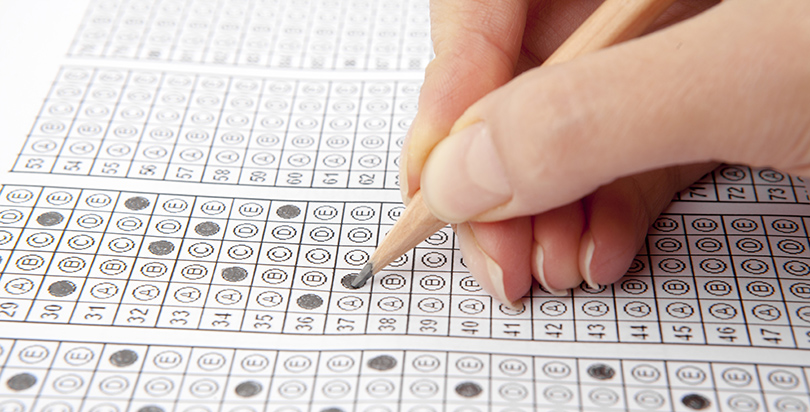 The nation’s 12th-grade students did slightly worse on national math and reading tests in 2015 than high school seniors did in 2013, according to National Assessment of Educational Progress results released today, even as high school graduation rates got better.
The overall score decreases were quite small — roughly two points in math and a single point in reading — but continued a trend of lackluster 12th-grade performance on the national test. The change in the 2015 results registered as statistically different in math compared to two years ago, but not in reading.
“Over the past seven years, schools have undergone some of the most significant changes in decades — work that is being led by educators who are retooling their classroom practices to adapt to new and higher standards,” U.S. Education Secretary John King said in a statement Wednesday. "We know the results of those changes will not be seen overnight, so we need to be patient — but not passive — in continuing to pursue the goal of preparing all students for success after high school.”
Researchers cautioned against reading too much into minor shifts in the 2015 NAEP scores.
“A one point move … is not significant in the real world,” Tom Loveless, a senior fellow at the Brookings Institution, told The 74 Monday.
Still the latest results paint a sobering picture of educational progress. Just 37 percent of students were prepared for college-level coursework in each subject, according to the test. Only 3 percent of students in reading and 6 percent in math were deemed “advanced,”  a rigorous bar.
Results dropped the most for students who were already struggling. Those at the 10th percentile fell six points in reading and four points in math. Students in the top 90th percentile saw their scores go up two points in reading but drop one point in math.
“The 12th-grade NAEP results confirm the need to move swiftly to ensure that all students have access to high-quality programs that prepare them for success in higher education and the workforce,” said Massachusetts Education Commissioner Mitchell Chester in a statement. “Too many 12th-graders are unprepared for the world after high school.”
Breaking out the 12th-grade scores by race since 2005 show some small differences in trends among groups, as well as yawning and largely stagnant achievement gaps. A bright spot: Hispanic students made the biggest gains during that time, going up six points in math and four points in reading.
The NAEP is a long-running, low-stakes exam administered by the federal government to a nationally representative sample of students in grades 4, 8, and 12 to gauge educational progress over time.
The latest 12th-grade results follow similarly disappointing news on fourth- and eighth-grade exams released last year, showing scores had dropped. But unlike the fourth- and eighth-grade scores, which have generally been climbing, particularly in math, since the 1990s with the exception of last year, the overall 12th-grade results have barely moved over the past decade even as the high school graduation rate reached an all-time high of 82 percent in 2013-14.
Twelfth-grade reading scores in 2015 were just a point higher than in 2005, while math scores went up two points since then. In reading, the average score is five points lower than in 1992. (Comparable data that far back is not available in math due to a change in the test.)
“The fourth-grade gains since the ’90s have been much larger than the eighth-grade gains, and the eighth-grade gains have been larger than the 12th grade gains — and the 12th- graders have basically been flat,” said Loveless.
Popular hypotheses for this include the idea that 12th-graders may be overloaded with tests and simply don’t take the exam seriously since it has no stakes attached. Others have suggested that the increased graduation rates have led to more struggling students staying in school, driving down scores.
Matt Chingos, a senior fellow at the Urban Institute who has studied the phenomenon said he hasn’t found convincing evidence for any of the explanations: “The disappointing answer is we don't know."
Critics of policies pushed by the Obama administration and many state policymakers — such as adopting the Common Core, revamping teacher evaluation, and expanding charter schools — may seize on the latest NAEP results, but researchers warn against using national test scores to judge specific policies, a practice sometimes called “misNAEPery.”
“The long and the short of it is that any stories that come out in the weeks after NAEP scores are released should be, at best, tentative and hypothesis-generating (as opposed to definitive and causal effect-claiming),” University of Southern California professor Morgan Polikoff wrote in a October 2015 blog post entitled “Friends don’t let friends misuse NAEP data.”
Footnotes:

1. There are actually two NAEP tests: the “long-term trends” assessment and the main” NAEP test. The latest results come from the main NAEP.