Support The 74 and stories like this one. Donate Today!
News
Personalized Learning

A student-led effort to establish a hiking trail on a woodsy campus. A multi-grade high school English class designed for students and by students, from the daily content to the annual tests. One-on-one technology coaching for teachers, built into their schedule.

They’re just a few of the ways public schools in Rhode Island are testing out a statewide effort to personalize learning for all students and train educators to embrace a “paradigm shift” in the way lessons are delivered.

This summer, early adopters at a dozen schools are competing for funding to further experiment with the concept as part of Rhode Island’s $2 million public-private personalized-learning initiative, which was launched in September 2016 by the Office of Innovation under Democratic Gov. Gina Raimondo.

Twelve finalist schools for the Lighthouse Schools Challenge Grant — whittled down from an initial 30 applicants — are in the final stages of drawing up proposals that will be shared with and scaled throughout the state and eventually, officials say, serve as a nationwide model for what successful personalized learning looks like in widespread practice.

Three winning schools will be selected in early August by a state panel of education department officials, principals, superintendents, teachers, parents, students, and nonprofit leaders. Each school will receive $200,000 to implement its plan immediately for the 2017–18 school year.

That quick turnaround will require ongoing support from state officials, who have been working with applicants in a series of summer workshops.

[We need] a focus on personalized learning because our world is changing and we find that what worked 30 years ago or 50 years ago just isn’t good enough for today.

Daniela Fairchild, director of education for the state Office of Innovation, said the state’s push for expanding personalized learning is rooted in a critical need to prepare students for future jobs, many of which don’t even exist yet.

“It’s about the economy, it’s about equity, it’s about opportunity,” Fairchild said in a recent interview. “We see the current [education] system as having been really valid for a very long time, but [we need] a focus on personalized learning because our world is changing and we find that what worked 30 years ago or 50 years ago just isn’t good enough for today. It’s not a knock on what we have; it’s just that we want to be proactive in thinking about how we can serve all of our students and prepare them for the economy of tomorrow.” 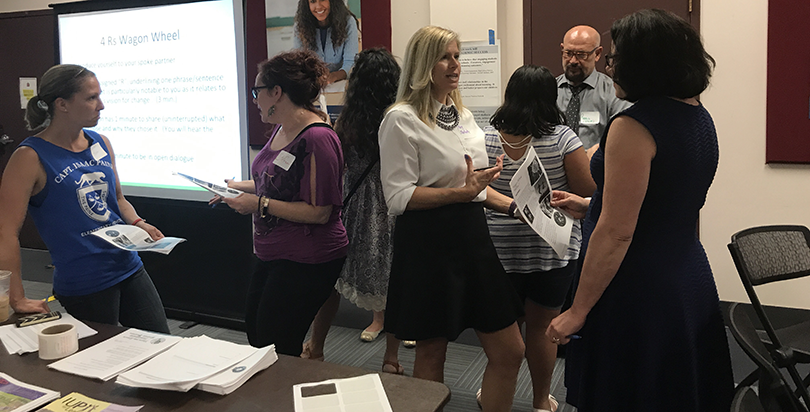 Rhode Island students, principals, and teachers collaborated at a June workshop on personalizing learning as part of the process for applying for a Lighthouse Schools Challenge Grant worth $200,000.
Photo: Rhode Island state Office of Innovation

In doing so, officials will be capitalizing on the flexibility afforded by the Every Student Succeeds Act (ESSA) — the nation’s federal K-12 education law, which returns significant power to the states — to chart and test how personalized instructional techniques can be delivered to its 142,000 students in 306 schools.

Richard Culatta, who headed the Office of Innovation in its first year before leaving in May to become CEO of the D.C.-based International Society for Technology in Education, said Rhode Island has long worked to position itself as an incubator for personalized learning.

“What we were really trying to do is say, ‘What would it look like for Rhode Island to be a lab state? Can we be kind of the [research and development] shop for the rest of the country on a number of issues, including education?’ ” Culatta said.

The state has invested in expanding wireless internet infrastructure to virtually all schools, which supported a widespread experimentation with a variety of digital learning modes, he said.

And many schools, including some grant applicants, also invested in tablets or laptops for all students and host FUSE (Educator Fellowship for Blended Learning Leadership) RI fellows, who coach teachers on blended learning techniques where traditional instruction is mixed with online methods. The fellowship program is run by the state’s homegrown Highlander Institute, a nonprofit which is funded by the Bill & Melinda Gates Foundation and provides specialized professional development for educators on blended and personalized learning.

The Lighthouse program is funded in part by the Chan Zuckerberg Initiative, a three-year, $3 billion investment by the pediatrician Priscilla Chan and her husband, Facebook founder Mark Zuckerberg, to advance science, education, and technology around the world. Other funders include the Jaquelin Hume Foundation, the Nellie Mae Education Foundation, and the Overdeck Family Foundation.

As they test new practices, the Lighthouse schools are expected to share their findings and guide the way for other schools, with the goal that all schools statewide will integrate personalized learning into their pedagogy.

“There will be high expectations for them … the ones that get the grant will be models, and they will have to share around the state,” said Todd Grimes, principal at Westerly High School, one of the finalists. “So it’s exciting but there’s also some risk involved.”

Asked what he views as the biggest challenge in this effort, Culatta echoed the principal’s concern that cultivating “a new culture” among educators, policymakers, and even families will take time and concerted effort.

“It’s a big culture shift to say, ‘Wait a minute, maybe it’s a fundamental right for students to have an education that’s tailored to their needs,’ ” he said. “[A lot of people may say] ‘The system that we have works just fine for me. Why should we change it?’ ”

The original applicant pool of 30 included 26 district schools and four charter schools. The majority are located in Providence County, the state’s most heavily populated region, with six cities and 10 towns. Rural and suburban areas of the state were represented in smaller numbers, officials said.

The 74 asked to speak with leaders from the 12 applicant schools to learn about their early efforts experimenting with personalized learning and what they plan to do with the grant money should they win. As part of the application, schools must submit a budget proposal and explain how they’d sustain the program launched by the grant.

Although they hesitated to reveal all in the midst of the competition, a few were glad to outline the gist of their proposals. A similar theme emerged: Most said they plan to focus on boosting professional development for teachers and providing students opportunities to take real ownership of the curriculum.

What’s already in the works: All students in one fourth-grade and one first-grade class were given Chromebook laptops last fall and spent the year using “playlists,” a list of student-specific assignments and activities, followed by a short assessment to give teachers immediate feedback. Other grades took turns using shared iPads or computers a few days a week. In 2017–18, all 344 students will receive their own Chromebook.

As a grant recipient, she would: Expand technology staff and support teacher tech leaders to encourage collaboration and professional development; potentially enact changes to classroom setup to support students’ needs and technology use.

“I thought that with the grant, we can begin moving [with] a faster focus on getting teachers the professional development that they need,” Denham said. “We have to work on those paradigm shifts a little at a time. And if we’re in it together, we can support each other and collaborate.”

What’s in the works: The K-8 charter school located on 20 acres of farmland in southern Rhode Island piloted a student “voice and choice” group last year that paired student leaders with Lapisky and other staff to conduct student-driven projects. Among them: starting a student newspaper, building and operating a farm stand, and clearing a hiking trail around the campus perimeter.

“If we can lift our baseline up a few notches as a part of this work, then we can raise the platform for everyone,” Lapisky said.

What’s in the works: A 1-to-1 program with Chromebook laptops for all 965 students in the grades 5–8 school; students work in small groups through “station rotations” using different apps and software in each station as well as “playlists” of assignments.

As a grant recipient, he would: Increase existing use of student “voice and choice” in directing learning; expand opportunities for virtual learning and earning advanced credits.

“We have pieces where we personalize the learning, but this grant [process] is helping us think about what we already do and how can we bring it to scale for all kids.”

The Bill & Melinda Gates Foundation provides support to The 74.