Analysis: Like ‘Death Tax,’ ‘Voucher School’ Is a Phrase That Aims for the Gut. It May Also Be ‘Fake News’ 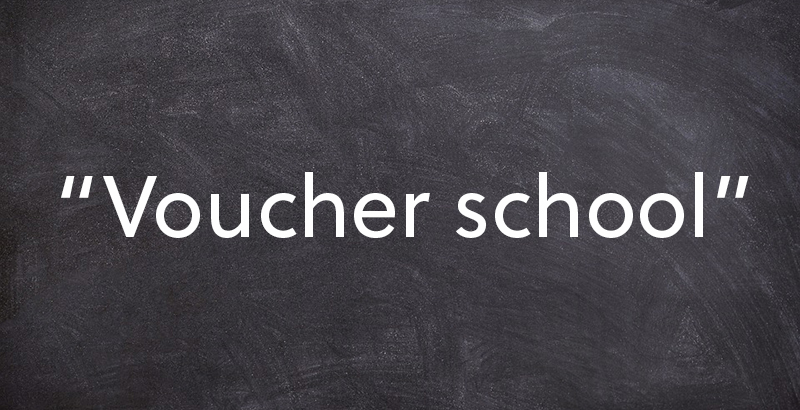 Huffington Post’s Rebecca Klein recently published a compelling examination of the questionable lessons taught in private schools run by evangelical churches. The story made a strong case that tax dollars in states that provide tuition vouchers to families who choose the schools are supporting curricula that’s more than fairly described as extremist.

To wit: Course catalogues examined by HuffPo include topics such as “Satan Created Psychology” and slavery as just one likely cause of the “War Between the States.” Another possibility? “God may have also been punishing people with the war, as it was preceded by a time of ‘religious apostasy and cultism.’ ”

But the publication may have put its thumb on the scale by using a loaded phrase to describe the schools. “Voucher Schools Championed by Betsy DeVos Can Teach Whatever They Want,” the headline reads. “Turns Out They Teach Lies.”

The use of the word “lies” is, of course, at the heart of a simmering debate about journalistic standards and linguistic precision that was brought to a roiling boil by Donald Trump’s election.

But what exactly is a voucher school? A class of schools with a widely agreed-upon definition or a political term of art? Chartered schools (which is what charter schools were originally called) are legally constituted by a charter, a document that spells out their governance structure. Boarding schools are schools where students get room and board in addition to the three Rs.

But a voucher school could be a private school, whatever its identity, or a private school that accepts students who receive tuition vouchers. The term implies that a school was established for the purpose of taking advantage of the existence of public funds for private school tuition.

The story describes the schools either as participating in a state’s voucher program or as accepting families that have been given tuition vouchers to use at private schools. That is more accurate but less sexy than the headline’s incorporation of voucher schools alongside U.S. Education Secretary Betsy DeVos, voucher proponent and red-hot internet clickbait icon, and the word lies.

One danger is that the news-consuming public is already understandably confused about the differences between the types of schools that fall under the large and sometimes ill-fitting tent of “school choice” and whether those distinctions matter. Most notably, DeVos’s championship of the term has muddied the waters regarding other schools of choice — meaning schools families opt in to, which include public charter schools, district-run magnet schools, and even traditional public schools that accept students from other districts.

The abuses highlighted in the piece and the curriculum used to justify them are horrible and the reporting that documents them commendable. But the use of a term like voucher schools threatens to paint everything, including secular private schools that do rigorous work, with a broad brush.

Back to Luntz. A conservative Fox News commentator and political messaging guru, and pollster to Pat Buchanan, Newt Gingrich, and Ross Perot, he’s credited with popularizing the use of the term death tax in place of estate tax, as well as other turns of phrase designed to hit the public at a gut level rather than an intellectual one. The subtitle of his seminal work on messaging is “It’s Not What You Say, It’s What People Hear.”

The most prominent use of voucher schools we could find was in a series of 2012 position papers put out by the Democracy and Education Research Group, an effort by the ACLU of Wisconsin and the Milwaukee branch of the American Federation of Teachers to halt Milwaukee’s controversial private school voucher program.

We asked Klein about HuffPo’s decision to use the phrase but didn’t receive an explanation. It’s entirely possible that responsibility for the term’s inclusion in the headline rests on a copy editor or another member of the editorial team, though it was used by Klein in the body of the article.

We asked three different education policy advocates known to hold different views what they understood about the phrase.

Michael Petrilli, president of the Thomas B. Fordham Institute, bit first. “It’s generally viewed among school choice supporters as pejorative,” he said. “Because ‘vouchers’ doesn’t poll well, while terms like ‘scholarships’ do. I’ve used it myself, though, at times of laziness. It means private schools that accept vouchers.”

Co-founder of Bellwether Education Partners and 74 board member Andy Rotherham doesn’t share Petrilli’s enthusiasm for vouchers, but agreed with his view of the phrase, as did Lars Esdal, executive director of Education Evolving, which follows teacher-led schools.

Of course, if “voucher school” makes it into the popular vocabulary, alongside “corporate reform” and “school privatization,” the term won’t be the first where what’s said isn’t necessarily what’s heard.