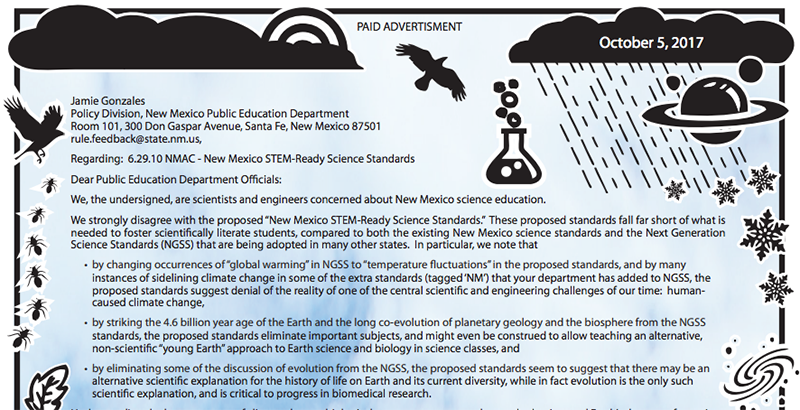 Dozens of New Mexico scientists are sounding the alarm about proposed changes to their state’s science standards on climate change and evolution.

Sixty-one scientists and engineers from Los Alamos National Laboratory took out a full-page advertisement in The New Mexican, Santa Fe’s daily newspaper, to make their point with a letter addressed to the state’s Public Education Department.

“We strongly disagree with the proposed ‘New Mexico STEM-Ready Science Standards,’ ” the letter says. The changes would substitute the words “temperature fluctuations” for “global warming” and remove the age of Earth and “some of the discussion of evolution” from the Next Generation Science Standards, which are used by 18 states and Washington, D.C. 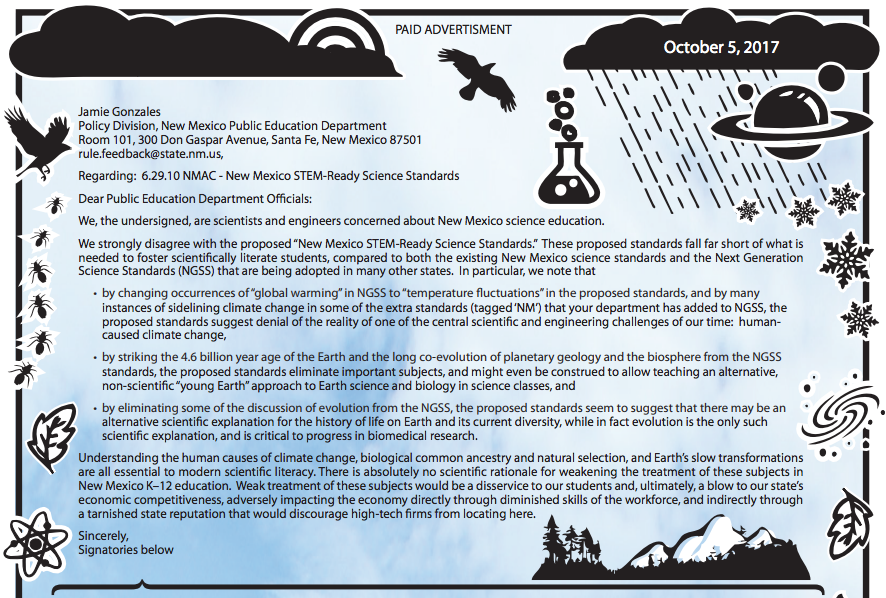 Part of a full-page ad that appeared in The New Mexican newspaper. (Courtesy of National Center for Science Education)

See the full letter and list of scientists here.

New Mexico’s acting secretary for education said the proposed standards would allow students to form opinions, KOB-4 reported. “If we’re going to build critical thinkers, we want to make sure we’re not imposing our values on our kids, that our kids are actually getting the chance to make up their minds for themselves,” Secretary-Designate Christopher Ruszkowski told the station.

But, wrote the scientists, “Understanding the human causes of climate change, biological common ancestry and natural selection, and Earth’s slow transformations are all essential to modern scientific literacy. There is absolutely no scientific rationale for weakening the treatment of these subjects.”

The policy committee of the Albuquerque School Board, which presides over the state’s largest district, also voted to sign a letter in opposition to the standards, according to NM Political Report. One board member said the letter was needed to let teachers know they can teach “real science,” the Associated Press reported.

The New Mexico Public Education Department is scheduled to hold a public hearing on the standards Oct. 16 in Santa Fe.