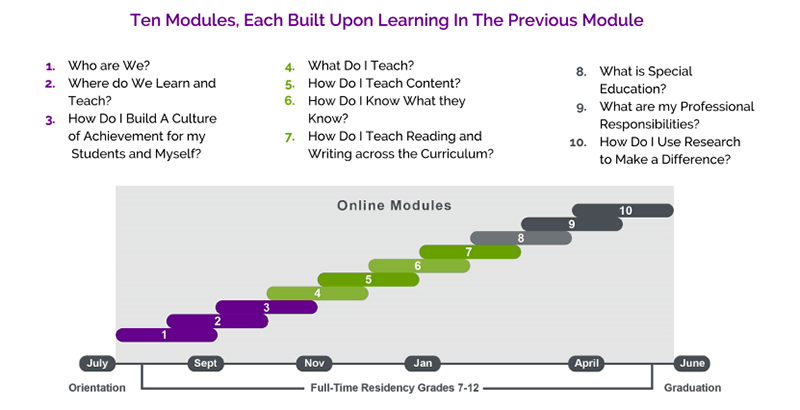 New York University is expanding its novel teacher training program, which places diverse teachers into high-needs schools for an intensive, yearlong master’s program organized around the belief that all teachers benefit by learning to work with students with disabilities and those learning English.

The Steinhardt’s Teacher Residency program combines online academic preparation with full-time classroom placements in districts and public charter schools in four states. Now completing its third year, it has grown from serving 10 interns to 75. The program’s goal is to have at least 40 percent of each class of teacher residents be candidates of color, according to an NYU spokesperson. More than half of members of the first three groups have been people of color.

A recently announced $481,000 grant from the Walton Family Foundation will support the program going forward. Here are three of its big strategies.

1 All teachers will learn special education and English-language-learner strategies.

The NYU program has taken a signature approach to training new teachers to work in classrooms where students have diverse and intense needs. All teacher candidates in the program learn not just to teach in a content area such as math or English, but also to adjust their instruction to reach all students.

“All of our interns are going to be in inclusion settings,” said Diana Turk, the program’s director of teacher education, referring to classrooms where students receive special education services alongside general ed students. “They’re going to be more effective teachers for all students, not just for their students with [disabilities].”

As U.S. classrooms become more diverse, teachers are increasingly required to tailor instruction to students with vastly differing needs. The methods employed by special education teachers in particular can help fill this gap.

It’s a unique way of addressing a long-standing problem. Traditionally, colleges of education have treated teaching students with disabilities and students learning English as specialized skills needed only by those who will work intensively with those groups, often in a separate classroom. General education teachers-in-training may get brief exposure to strategies for meeting those students’ needs, and in some places an extra degree or credential is required.

Among other factors, this has compounded shortages of special ed and English-language-learner teachers, even as demand for them has risen.

A Little Finland, a Little Canada, a Lot of Moxie: Why One Indianapolis Teachers College Is Betting It Can Train More Successful Educators After a Radical Reboot

From 2005 to 2015, the number of special education teachers in the United States fell by 17 percent, while the number of students in need of their services decreased just 1 percent, according to Education Week.

In 2016, 32 states reported shortages of teachers of English language learners, even as the number of students needing their services climbed by 1 million between 2000 and 2015 to 4.8 million.

2 Including “emergent bilinguals” and students with disabilities will be the rule, not the exception.

At the same time, schools increasingly recognize the value of serving both groups of students in mainstream classrooms, where their increased numbers now make them as common as any other student demographic group. Arrangements for meeting their needs in general education classrooms, however, range from “push-in” services, where specialists pop in to offer support, to placing two teachers, one with the requisite skills, in a single classroom.

NYU’s graduates will have all three sets of skills, said Ayanna Taylor, a professor in the program.

“We wanted to make it such a central part of our curriculum that that there was no segmenting off,” she said.

3 New teachers will demonstrate their abilities before getting a classroom of their own.

After teaching for a year in New York, California, Florida and Pennsylvania in settings as varied as San Francisco Unified School District and a number of small charter schools, some with a focus on including students with disabilities, NYU’s residents will earn a master’s degree. If trained observers rate them as effective or nearly so, they will be recommended for a New York state teaching credential.