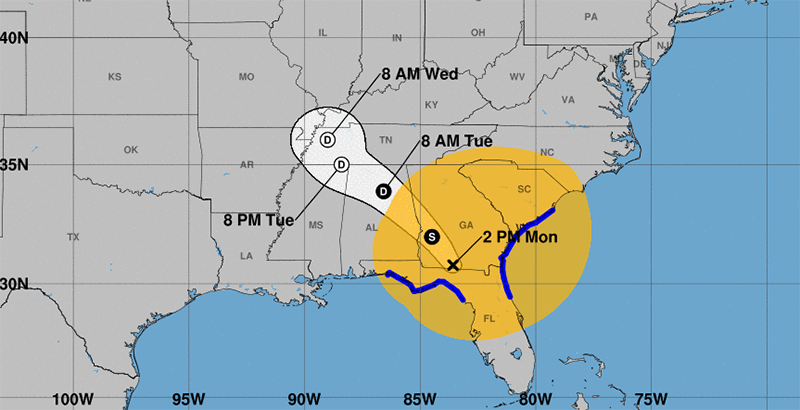 Hurricane Irma is predicted to travel northwest, downgrading to a tropical depression Tuesday morning over Alabama where winds will be less than 39 miles per hour. (Photo credit: National Hurricane Center)

More than 4.5 million students, or 10 percent of the nation’s school-age population, are missing classes due to Hurricane Irma’s enormous sweep across the southeastern states.

Hundreds of school districts in Florida, Georgia, South Carolina, North Carolina, Tennessee, and Alabama have posted delays or closures lasting from several hours to indefinitely, citing concerns of strong winds and flooding that would prevent students from getting to school or learning in safe conditions.

A hurricane that had been expected to strike South Florida head-on trekked up its west coast instead, impacting the school schedules of millions of teachers and students in other states as well. Irma is now predicted to move northwest, downgrading to a tropical depression (wind speeds less than 39 miles per hour) over Alabama by 8 a.m. Tuesday.

Irma is expected to continue to produce heavy rain and flash flooding over portions of the Southeast today. #Irma pic.twitter.com/z7XdYo0fjL

ALSDE has sent info to local superintendents regarding the closing of schools if systems elect to and process for approval of make-up days. pic.twitter.com/jVRuFkh0FI

Georgia’s Department of Education canceled a summit scheduled for later this week to free up hotel space in case it is needed for evacuees.

We want to avoid using hotel rooms that may be needed by #HurricaneIrma evacuees. We will reschedule for a later date. Stay safe, everyone! https://t.co/fBzHXt4IU8

FEMA offered advice for helping children deal with Irma’s approach: play games, keep explanations of the natural disaster simple, and tell them steps are being taken to get them to safety.

Help children cope with #Irma:
✅ Explain what is happening simply & directly
✅ Reassure them of the safety steps taken
✅ Play games together

LA Integration Leader Mourned By Many She Inspired

Doing the Math on AFT’s Net Worth